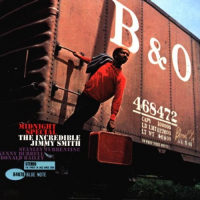 The history of jazz is filled with great pairs: Duke Ellington and Billy Strayhorn—Dizzy Gillespie and Charlie Parker—Dave Brubeck and Paul Desmond—Wayne Shorter and Joe Zawinul.

Add one more pair to the list: Jimmy Smith and Stanley Turrentine.

It was inevitable that Smith and Turrentine would find each other.

Together, they created a series of great albums. The one you know best is Back at the Chicken Shack, the 1960 classic that is one of the genuine high points of the soul-jazz movement. The one you don't know, or know less well, is Midnight Special—another 1960 album from the very same session, featuring the very same lineup: Smith, Turrentine, guitarist Kenny Burrell and drummer Donald Bailey.

The pleasure starts immediately with the opening number, "Midnight Special," a slow, blues-soaked affair. Turrentine sets the mood from the start, with a fat, round tone, a down and dirty solo that announces that this may be Smith's album, but it's Turrentine's star vehicle. Smith takes over with a slow and sensuous turn, followed by Burrell's tasteful, spare guitar work. It is 10 minutes of pure blues heaven.

And then the pace quickens. The second number, written by Turrentine, is called "A Subtle One," but that's misleading. It's faster, bouncier and more boppish—a real toe-tapper. Smith bubbles along, sounding more upbeat. Turrentine takes an almost rock-ish solo. Burrell, the perfect complement to both Smith and Turrentine, follows.

And now the pace gets even faster. "Jumpin' the Blues" is almost rock 'n' roll, which is hardly a surprise. That same year on the Billboard charts, Elvis Presley and Chuck Berry and Chubby Checker were making music history of their own. This is hard bop pure and simple, swift blues (what is rock, after all?), with Smith bouncing crazily on the B-3's bass pedals.

Finally, as if exhausted by the steady rush of tempos on the previous numbers, Turrentine takes a slow, sad crawl on the Charlie Parker and Jay McShann "Why Was I Born." It is six minutes of stark blues, reflecting the title. And then, to close the album, the band swings on Count Basie's retro classic "One O'Clock Jump," as if to say, hey, it's all for fun.

And then it's over, 36 minutes after it begins. Midnight Special is indeed special. It ranks among the best that Jimmy Smith and Stanley Turrentine ever produced, together or separately. Get it.