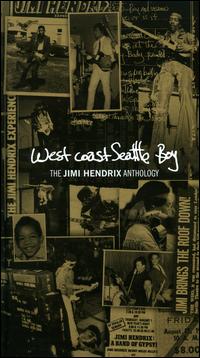 Since assuming ownership of Jimi Hendrix' archive in 1995, the late guitarist's estate has done yeoman work to dispel the shadow cast over the rock icon's legacy by the spate of posthumous releases that began flooding the marketplace almost immediately upon his untimely death in 1970. West Coast Seattle Boy: The Jimi Hendrix Anthology maintains a delicate balance of attractions for the completist and the casual fan.

The inclusion of the documentary DVD titled Voodoo Chile, directed by Bob Smeaton, overseer of The Beatles Anthology (Apple, 2003), contains an abundance of footage featuring Hendrix in concert (though the music unfortunately is often overdubbed rather than the audio matching the video). The format of narration by Bootsy Collins reading excerpts from Hendrix's own letters and interviews is novel, as is the graphical interspersing of the man's own photos, letters, written lyric sheets.

Unfortunately, and ironically considering co-producer John McDermott wrote one of the most candid and objective biographies of Hendrix, Voodoo Chile grows more superficial as it progresses over the course of its 90 minutes. The documentary is at its best as its traces Hendrix's early years, his enlistment into the army and post-service devotion to music that found him bouncing back and forth between the South and New York city, where his meeting with Animal's bassist Chas Chandler was the turning point in his career.

It's at this point the sense of the brevity of Hendrix' career is as striking as is his naiveté about the social and business realities that affected the last years of his life. Those aspects of the story are given short shrift here, to say the least, but it's noticeable how Hendrix ages from 1968 to 1970, retaining his boyish demeanor only when smiling. Ironically, this coincides with the diminution of his abandoned stage antics, even as the power of his playing remains and actually increases in proportion to the personal nature of his material. The evolution of the power in Hendrix's music is the true distinction of West Coast Seattle Boy: The Jimi Hendrix anthology.

Don Covay's "Mercy Mercy" is the second of 15 rare tracks on the first disc that document Hendrix in a sideman role and it might have been written by the archetypal guitar hero, had he taken a moment to reflect on the feverish approach he took to recording when he decided to go out on his own as a musician. It's not correct to say these cuts, that also include work with Little Richard, King Curtis and other lesser lights of the early 1960s R&B scene such as Rosa Lee Brooks and Jimmy Norman, feature Jimi Hendrix though: his guitar is a definitely subservient component in the tight arrangements of these close to two minute cuts.

But the inclusion of these rarities, collected at long last in one place after years of bootlegging, demonstrate what a tremendous leap Hendrix made when, after being taken under the wing of Chandler, he moved to London and began recording with The Experience consisting of drummer Mitch Mitchell and guitarist-turned bassist Noel Redding. In it durable hard-bound and understatedly colorful design, this box set (also available in various combinations of CD, DVD and vinyl formats) is the fully-authorized work of the Hendrix family, in collaboration with McDermott and original engineer Eddie Kramer as they make a thoroughly legitimate attempt (perhaps even more so than with the previously-released archive titles), to thoroughly establish a firm foundation for deeper exploration of various phases of Hendrix's career in the future.

Alternates mixes and recordings both studio and live of such familiar songs such as "Fire," "Red House" and "Purple Haze" comprise the bulk of the 44 unreleased audio tracks dating from 1967 to 1970. If only for the remastered sound courtesy of George Marino, all music lovers no doubt will appreciate selections here that have never appeared in authorized form, such as this ragged-but-right rendition of Bob Dylan's "Tears of Rage." Even the most familiar material becomes worth hearing again as the layers of Hendrix guitar are more discernible, the clarity of the bass lines increases greatly enough to may invoke revisionism toward Redding, and Mitchell has never sounded more deeply powerful, and thus more of a perfect foil for the guitarist.

Hearing such tracks as the instrumental take on "Are You Experienced" and the alternate of "May this Be Love" suggests the range and imagination Hendrix possessed and how, especially in the early days, he benefitted from the counsel of Chandler. West Coast Seattle Boy is arguably be the most objective of the many Hendrix reissues precisely because it collects in one place not just a plethora of song sketches and unfinished master takes such as "Cat Talking to Me" and "Burning Desire," but curios like rhythm guitarist Larry Lee's original song "Mastermind" as well as a solo recording by Love's Arthur Lee, called "Everlasting First," to which Hendrix contributed.

That said, during its over four hours of playing time, this anthology may try the patience of any listener less than a thoroughly devout fan of the man. "Little One," for instance, with Traffic's Dave Mason on sitar, sounds dated in a way virtually none of Hendrix's other recordings do. Likewise, the 20 minute jam with organist Larry Young (which no doubt might've been the centerpiece of an album at the apogee of fusion in the mid-1970s), is, like most such free-form improvisations, a sequence of less-than-stellar moments speckled with flashes of brilliant interplay.

And the raucous rocker "Calling All The Devil's Children" is disrupted by directionless spoken word segments. At such moments, the insight into Hendrix's personality, while laudable on its own terms, undermines the potential revelations of his working methods. As such, this superficially discerning approach renders this box set potentially less attractive than its now-discontinued predecessor, The Jimi Hendrix Experience (MCA, 2000).

Nonetheless, a suite of acoustic tracks is an uncontested asset of this collection precisely because it reveals a side of Hendrix left untouched by previously released archive titles such as South Saturn Delta (MCA,1997). "Hear My Train A'Comin'" has some electric lead, but is otherwise an intimate track spiced with harmonica from Paul Caruso. Likewise, "1983 A Merman I Should Turn To Be," the heavily-produced centerpiece of the dream sequence within Electric Ladyland (Reprise, 1968), is a science fiction story placed squarely within the folk genre.