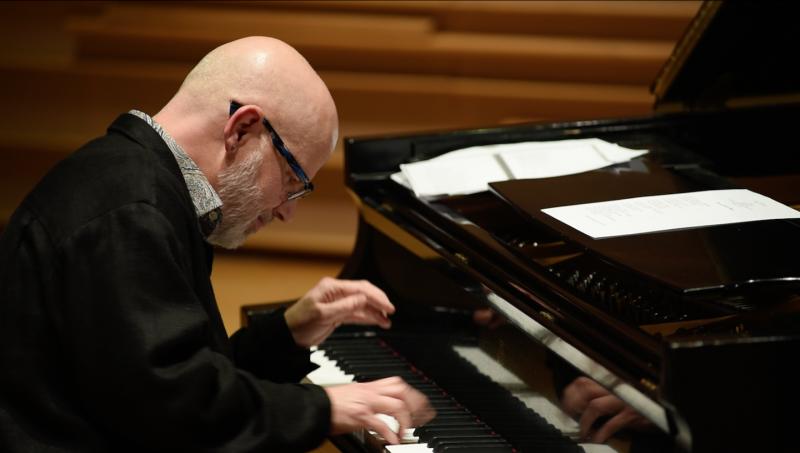 Jim Ridl is a brilliant and imaginative pianist whose music is true to his North Dakota origins while firmly rooted in the jazz tradition. Versatile and adaptive to almost any situation, he fronts his own groups, is a frequent sideman, and a prolific composer. He occupies a monthly residence at the 55 Bar in Greenwich Village and recently released his sixth album as a leader, A Door in a Field V.2, Songs of the Green River (Self Produced, 2016).

This piano solo concert by Ridl was of a kind that is happening more frequently these days. It represented a crossover between jazz, baroque classical, and other genres that included poetry readings, each of which set the stage for piano improvisations with a common theme. The event was part of a series curated by Dick Leonard and Scott Albertson for Project 142, a non-profit group that sponsors innovative concerts in the New York area. This one was held at the DiMenna Center which houses several fine performance spaces on 37th Street near 10th Avenue, in the heart of the mid-town West Side renaissance. Benzaquen Hall is a small auditorium that gives an intimate feeling of an at-home performance while having all the accoutrements necessary for a music hall, including a factory-fresh Steinway piano. The place was filled to the gills with Ridl's fans, friends, and musicians, one of whom, the great vibraphonist Joe Locke, grabbed a front row seat and was obviously entranced by Ridl's delivery.

Ridl began by reading a poem, "The Peace in Wild Things," by Wendell Berry, where the poet finds in nature a respite from mortal concerns. (Overall, the theme of the concert was about finding hope and grace in a troubled world. Growing up on a farm, Ridl early learned to take comfort in the woods, fields, and river nearby.) He improvised around Bach's Cantata 140: "Wachet auf, ruft uns die Stimme" and then, the first movement of John Coltrane's "A Love Supreme," in both of which Ridl conveyed a sense of humility and gratitude. Couperin's "Les Cherubin" provided a quiet, slightly swung transition to Ridl's "H.M. Etude," where the pianist's imaginative use of clusters built in intensity like a Bach organ etude. Then the cannons (pun intended) were fully loaded for the sardonically titled "Jazz Apprehension Month," which further escalated the energy, showing Ridl's ability to convey the most powerful feelings, as he did in his first album, Five Minutes to Madness and Joy (Synergy Music, 1999). Indeed, "Apprehension" utilized elements of ragtime and stride to achieve a pianistic brilliance akin to Art Tatum.

If this first segment of poetry and music conveyed a feeling of peace culminating in wild ecstasy (as in gospel singing), the second seemed to convey the ultimate aloneness of the plains and the mountains . A poem that I believe was written by Jim's late brother plays on the word prairie/"prayery" to express the spiritual aspect of a broad, untamed landscape and the unique solitude it engenders. Ridl's frequently performed "Sun on My Hands," from the first volume of Door in a Field (Dreambox Media, 2003) served as a reminiscence of his beloved father. "Thirty Foot Ceiling" used a repetitive bass line in the manner of a passacaglia which allowed Ridl to improvise complex two hand sequences that shook the listener out of complacency. Then, after reading Ogilvie's "The Horse of Your Heart," which compares the human heart (Plato's soul?) to an untamed horse as a metaphor for unbridled passion, Ridl "horsed around" with "Equine Attitude," letting loose with his remarkable technical facility. A synopsis of Cormac McCarthy's novel, The Crossing expressed the picaresque wanderings of a young man coming of age in the midst of a corrupt world in which he ultimately finds himself all alone. Ridl followed up on this theme with a melancholy ballad of his own, "Carry Me Home."

The third and final section of the concert brought about a stirring release into joy. Ridl read from a poem called "Blossoms," by Li-Young Lee, evoking the sheer joy of sensory experiences like devouring a peach, moving from "impossible blossom to sweet impossible blossom," making what we love our own. He then played an improvisation around Bach's cantata "Zion Hort Die Wachter Singen" in the same way that Nina Simone in "Little Girl Blue" took one song ("Good King Wenceslas") and superimposed another above it. Ridl then quoted from Langston Hughes' Book of Rhythms: "There is no rhythm in the world without movement first," a remarkable case for rhythm as a metaphysical truth, or if you wish the vibrations of the universe. He then read an excerpt from Maya Angelou's poem "Human Family," a case for the common humanity of all the peoples of the world. The concert concluded with three 1930s jazz standards: "Stompin' at the Savoy," "A Kiss to Build a Dream On," and "Caravan," with the latter building to a frenzied rush into unknown regions.

Overall, Ridl mastered the challenge of maintaining the discipline of a classical music performance while achieving improvisational freedom. His poetry readings gave thematic meaning, contemporary relevance, and personal significance to the music. At times, it was as if George Gershwin were at the piano composing the music for "Rhapsody in Blue," and "Concerto in F." (Gershwin along with Ellington and Leonard Bernstein set the strongest precedents for jazz as "America's Classical Music.") Another figure whose inspiration was felt was Cecil Taylor, who has many times read poetry at his performances. If Ridl minimized forays into the avant-garde, his rhythmic pulse was at times reaching for the African tribal roots that was fully developed in Taylor's playing.

Poem: On the Prayery -Jeff Ridl Sun on My Hands (Ridl) Thirty Foot Ceiling (Ridl) Poem: The Horse of Your Heart -William Henry Ogilvie Equine Etude (Ridl) Commentary on the novel, The Crossing by Cormac McCarthy Carry Me Home (Ridl)