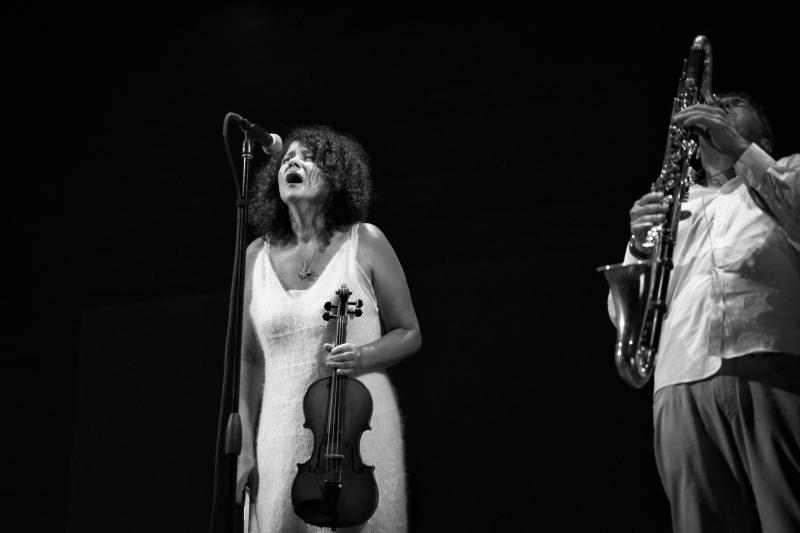 Few musicians understand that music lives at the edge of language more than Iva Bittová (violin, vocals), Timothy Hill (guitar, acoustic bass, vocals), and David Rothenberg (clarinets, electronics). As the New Cicada Trio, they offer a world unto themselves, offering themselves as they do unto the world. Their willingness to treat improvisation not as a matter of experiment but as a means of nourishment took on lucid significance when the trio rested from its migratory travels in New York City's Rubin Museum on 23 August 2017.

The program was a mosaic of flora, wingbeats, and song. Each orphaned motif found surrogacy in affirmations of being. Such was the sensitivity of their performance, by which listeners knew to resist reading spiritual origins into their music-making, instead experiencing it as a series of communication acts, bodily rendered. Even more appropriate, then, that the musicians dedicated this sonic happening to Pauline Oliveros, whose messages of listening with fullness pulsed through them.

The music was more than alive; it was living. It ended as it began—with breath—but in between that respiratory framework it also ambulated, loved, and morphed into a lifetime of poetry. At first, it was a whisper. Bittová rasped notelessly behind her violin's bridge, Rothenberg then exhaling through his clarinet as if it were a rite of passage. Hill's intoning was the sky to Bittová's birdcalls, a string of vocal driftwood on the shore of our reception.

On paper, all of this might seem nothing more than an exercise in ambience, when in reality it was far more concerned with matters of the internal than the external. I felt this in Rothenberg's bass clarinet, which unfolded beneath restless skies of notecraft. He and Hill developed an organic rapport, which between them cleared plenty of room for Bittová to flit about. Indeed, she wandered the auditorium, pushing her bare feet into the forgiving material of sound.

Rothenberg, meanwhile, submitted further to the whim of his laptop, from which swarmed a virtual ensemble of birds and aquatic insects. He employed this technology, however, not as a prosthetic but as a chemical reaction. Whether dueting with violin or guitar, he was the shadow to every undercurrent of fissure and spring. Hill, for his part, keyed so deeply into the forest that I couldn't help but smell the perfume of leaves in his sounding. Whether engaging multiple planes with his throat singing or gently sweeping away underbrush, he was the red shift of every inward astronomy.

By the end of their concert, each had marked canvases of air and left them to hang, unnoticed but for their initial strokes, as everlasting monuments to the brevity of their creation. And if you ever find yourself at the Rubin, keep your ears open. They just might embrace you against the grain of a wayward life.