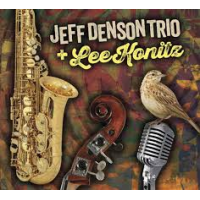 Let us celebrate the life of 87-year old jazz master Lee Konitz. The alto saxophonist has been recording music for seven decades now. While his tone is not as strong these days, his music is arguably more expressive now than ever. Heard here as a guest with bassist Jeff Denson's trio, he adds a new dimension to his performance, singing.

In recent live performances, Konitz has set aside his horn to wordless scat sing as he calls them "syllables," over the music. This is the premier of his singing documented. And this, maybe the perfect setting for the saxophonist's vocalizations. Denson, nearly 50 years Konitz' junior, has been a faithful collaborator with the saxophonist since 2007. The pair recorded three previous Lee Konitz New Quartet albums, Deep Lee (Enja, 2008), Live At The Village Vanguard (Enja, 2009), and Standards Live At The Village Vanguard (Enja, 2014).

Here, Denson's working trio of pianist Dan Zemelman, and drummer Jon Arkin rework Konitz' signature tunes: some standards, and music the saxophonist first performed sixty years ago with pianist Lennie Tristano. Konitz' tone on alto is akin to late period Art Pepper, one that is somewhat brittle but quite expressive. Tristano's "Baby" opens the disc with Zemelman's two-handed gambol and Denson's deep woody bass that gives way to Konitz' delicate and airy saxophone. Their improvised duet follows with both Denson and Konitz scatting wordless notes that flow as naturally as if blown through horn or pulled from bass. The complexities of Tristano's "East Thirty- Second" and Warne Marsh's "Background Music" are standout quartet pieces here. Konitz' alto is as delicate and precious as fine china.

Denson takes a turn singing the lyrics to "Body And Soul" and "Skylark." His voice, like his bass, sinks root down in old school sonorous sound. His vocals on "Body And Soul" give way to Konitz' solo, again eschewing his horn, his vocals simply a proxy for his horn. The music is as familiar as an old friend and as comfortable as that old sweat shirt you just can't retire.