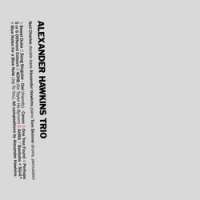 For the inaugural release on his own imprint, pianist Alexander Hawkins for the first time tackles the classic piano trio. Hawkins has already convinced in an increasing variety of formats, ranging from his customary ensemble, heard in its latest incarnation on Step Wide, Step Deep (Babel, 2014) to chamber nonet (broadcast on BBC Radio 3, but yet to materialize on CD) to his recent solo album Song Singular (Babel, 2014). Factor in his appearances with the likes of saxophonists Evan Parker, Joe McPhee, drummer Louis Moholo-Moholo, and Ethiopian jazz pioneer Mulatu Astatke, and you can see why he garners recognition as one of the UK's brightest talents.

In such an exposed context Hawkins has chosen familiar faces to buttress and beguile. Bassist Neil Charles and drummer Tom Skinner already figure in both the current incarnation of the leader's ensemble and Astatke's band and their interventions bring Hawkins' charts to life. They work together so well it can seem as if they are following separate but complementary routes to the same destination. Skinner makes even odd lurching meters sound unforced and natural, while at the same time maintaining timbral invention. Charles meshes well with the drummer, occasionally contrapuntal but more regularly fulfilling the time keeping role albeit with skipping embellishments and asides.

Hawkins pursues idiosyncratic and unanticipated lines, which often either loiter behind or dash ahead of the rhythm section, as he artfully dodges around the beat. Matters sometimes take a whimsical turn, as Hawkins hints at but refuses to outline the tunes, as in the one section of "Song Singular -Owl (friendly)—Canon" and "Perhaps 5 or 6 Different Colours." Hawkins' use of tension to unsettle is well illustrated from the off in "Sweet Duke." The ricky ticky drum intro steers expectation one way, while Hawkins' spare piano redirects it another, with Charles the mediator, as the trio roots the dedicatee's approach to the keyboard in an unaccustomed setting.

A Cecil Taylor feel pervades the leader's outpouring on "AHRA" though at considerably reduced velocity as it proceeds as a ballad style shuffle. On "Baobabs + SGrA*" Hawkins overlaps rather than segues the constituent pieces, such that the drifting "Baobabs" theme, reprised from his debut No Now Is So... (FMR, 2009), serves as a regular point of departure for a series of tangential assertions. Hawkins enjoys an unaccompanied introduction with a Monkish tinge derived from unpredictable pauses and blues sonorities in the hesitantly exultant "Blue Notes for a Blue Note (Joy To You)." It's striking that there are no bass or drum solos on the set, until Skinner alone ushers out the final number at a gallop, but that only confirms how thoroughly everyone in the threesome has placed themselves at services of the pianist's fertile imagination.