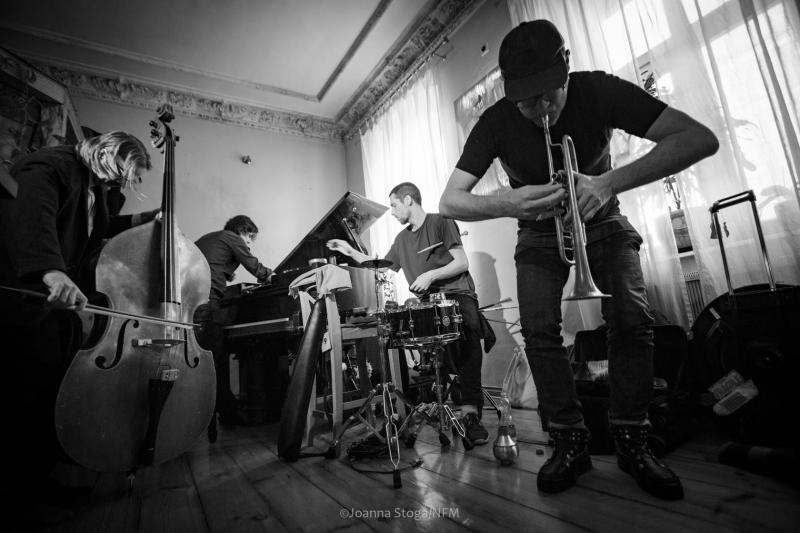 You, dear reader, might have been to the occasional house concert, growing in popularity as these events are: but have you ever attended three in one afternoon, six over two days? Such was the potential over the climactic weekend of Jazztopad, that excellent Polish festival whose main gigs are set in the soaring concert hall of Wroclaw's National Forum Of Music. But in the hours prior to witnessing sold out gigs by Charles Lloyd and Herbie Hancock, it was possible to catch a revolving cast of artists at these domestic functions, many of whom had already delivered more high profile NFM sets during the preceding week of the festival. Unusually, the admission to these gigs was free, but the space was limited, and so they presumably reached capacity fairly early.

Of course, this full marathon nature was probably only experienced by the musicians, the festival organisers (artistic director Piotr Turkiewicz at the vanguard) and the rugged posse of music critics, who hurtled from one apartment to the next, in the north of Wroclaw on the Saturday afternoon, the south on Sunday. There probably weren't so many 'normal' punters collecting the full set of gigs. However, such homely immersion did have a profound, cumulative effect, the gang ferried around, as if about to put downpayments on their new properties, viewing these contrasting surroundings in differing parts of town. It became a kaleidoscope of furniture, moods, spaciousness, lighting, nibbles, beverages and, primarily, freely improvised sounds, as the musicians continually formed fresh relationships, these multiple groupings setting about their spontaneity, affected themselves by the acoustics, the spaces, the audience emanations. For a couple of afternoons, this became a new way of living, forever on the road to a new magic carpet (or shiny lacquered floor). Needless to say, the players were completely unamplified, heard in their naked state.

Tomeka Reid considered using an amplifier for some of the sets, but ultimately her naked cello was able to cut through any sudden lurches in group volume. The majority of the improvisations concentrated on hushed sounds, savouring the varying acoustics of each apartment, which mostly sheltered the music in a softly limned fashion. In one house, a small-bullet, huffing, panting pooch actively became involved in the music, providing a kind of percussion part, or at the very least, some well-timed salivating atmospherics. In another apartment, Jason Roebke suddenly found that he needed some fresh air, opening a sliding door/window, and stepping out onto the patio, where he continued to play, soon closing the glass portal, making one of the largest possible mutes, as he considerably decreased his sound, as heard through the slim-crack opening.

In another apartment, Benoit Delbecq had spent time preparing its piano, for one of the best pieces of the weekend, joined by Roebke, Peter Knight and Samuel Hall. The latter's drumkit could almost be defined as 'prepared' too, its skins laid out with a multitude of small percussive tools. The improvisation was unavoidably exotic, taking on certain delicate characteristics of Orientalist music, with muted chiming, swishing clusters and detailed scattering of malleted metal and wood. Knight revealed a taste for water, poured into his trumpet to interact with his breath-course. He also enjoyed placing a compact disc flat against his bell, making a crisply buzzing mute. It was Knight who was often responsible for some of the smallest, faintest sounds. On the first day, Kris Davis had a problem with the tuning of a piano, but Delbecq coped more dangerously, actively finding fresh tacks in his playing, to work around the flaws. Theodosii Spassov actually sounded better in the living rooms than he did during his solo performance in the NFM, where he chose an unwise effect to over-amplify his Bulgarian wooden flute. For this weekend of home concerts, Spassov was pleasingly acoustic, simply and naturally inhabiting the room spaces.

The cumulative experience of this weekend of gigs was immense, as the musicians were caught in a kaleidoscope of performance permutations, sometimes three or four, and often more, dedicated to an instant sensitivity, responsiveness to their ever-shifting surroundings and audiences, with everyone appreciating a hushed contemplation of the varied sonic delicacies on offer. In this temporary universe, bathing in the sounds of free improvisation became a new way of existing, just for two afternoons.