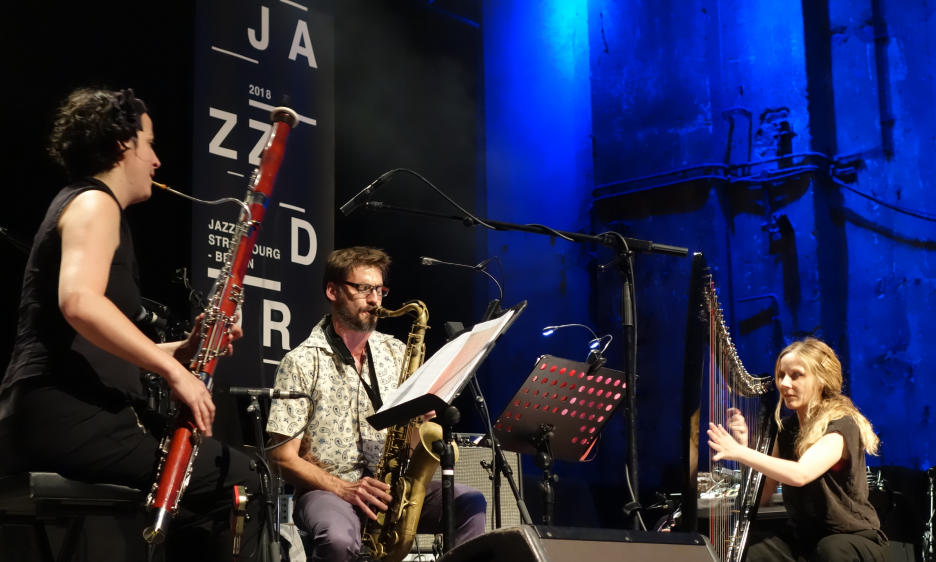 Jazzdor Berlin is a satellite of the Jazzdor Festival of Strasbourg founded 31 years ago. This year's 12th edition of the Franco-German festival held as usual at Kulturbrauerei, an abandoned brewery in Berlin borough Prenzlauer Berg, presented 11 groups with 40 musicians during four nights. Among the 40 musicians were five female musicians: Sophie Bernardo, Airelle Besson, Silke Eberhard, Andrea Parkins and Rafaelle Rinaudo. They played mostly in egalitarian groups.

The festival brings bi-or multinational collaborations and introduces new as well as existing French configurations to the Berlin audience in a fine balance of younger and older musicians. Besides the French musicians, this year's edition had nine musicians from Germany, two from Belgium, and one each from Switzerland, Italy and the US. Some artists return in different combinations and constellations, and regularly there are new faces and configurations. This year's edition started with pianist Roberto Negro's trio DaDaDa and concluded with baritone veteran Francois Corneloup's quintet.

My personal favorites of this year were a wondrous sound unit of bassoon, harp and saxophone, a surprising and intense pointillist trumpet-piano-drums trinity and an octet with a special twisted charm, vitality and joy of playing the music.

The bassoon-saxophone-harp unit of Sophie Bernado, Hugues Mayot, Rafaelle Rinaudo, called Ikui Doki, was a marvelous affair, captivating not only because of its attractive sound, or the entanglement of their respective instruments and their splendid musical humor, but above all because of the way the three musicians went for, and into, their unfolding stories (for characteristics of some pieces see the slide show at the top of this article). I knew Sophie Bernardo already from her strong contribution in several concerts with Eve Risser's great White Desert Orchestra (WDO) and harpist Rafaëlle Rinaudo from her daring duo with WDO bassist Fanny Lasfargues. It was a joy to see them joining forces with versatile reedist Hugues Mayot of the same generation and make something so strong out of it. Bernardo is a sassy, imaginative improvising musician and Rinaudo knows the ropes, the rough and the tender, the stormy and the serene side. She used the vibrations of the strings and percussion on her instrument (and body) in a marvelous way. Saxophonist Hugues Mayot operated with great sensibility here in terms of tone and presence.

French trumpeter Airelle Besson and the topnotch Cologne pianist Sebastian Sternal and drummer Jonas Burgwinkel started to work as a trio a while ago. However the trio constellation has not actually performed live so often as yet. The trio came forth from a tour together with Parisian bassist Ricardo del Fra four years ago. Musically they seemed to be destined to work with each other, but in practical terms it was difficult until now for them to work with each other more regularly. Jazzdor was good luck for them and it was apparent they were eager and highly motivated to play together. Compositionally and in terms of performance dynamics, interaction and liveliness, it became an extraordinary thing, enriching for all three musicians. The beautifully shaped music was remarkably fresh—a real nice surprise and more than worthwhile to be presented and heard elsewhere in the future.

The ensemble has previously played the Jazzdor Festival in 2014 (Berlin) and in 2015 (Strasbourg). Its first album, aptly entitled Polyjazz, was recently released by renowned Budapest BMC label. The music opens a new chapter of multiform interweaving, collaging and intertwining of heterogeneous approaches and ways of entering, different layers, voices and ensemble parts in playful competition with each other.

As such it appeared to be much more open, light and more flexible and permeable than former tightly defined and directed attempts. Pointed titles of pieces, composed by members of the ensemble, such as "Zwickmühle" (Lüdemann), "Traum im Traum" (Terzic), "Schwarz in Weiss" (Lüdemann), "Des Arbres sous les pieds"(Robert) and "Trois fois rien"/"Nichts und wieder nichts" (Ceccaldi) speak for themselves and indicate the nature of the game. It turned out as a stimulating, challenging and enjoyable complexity, most significantly manifested in the grandioso encore with Ceccaldi's piece "Trois fois rien," that Ceccaldi himself conducted with theatrical verve.

TEE is one of the most stable and significantly developing French-German ensembles. It has yet to conquer its adequate place in the French and German scene respectively at more of those countries' venues and festivals tying in with the times that German pianist Joachim Kuhn played a prominent role on the Paris jazz scene.

Music like this lives by two things. Firstly, good acoustics, and secondly, lively, playful and personal performance. A good sound quality that fully transports its subtleness as well as the contrasting bright loudness, the layers and overlaps etc. is crucial. In the Kesselhaus hall a lot of its plasticity and deep bone unfortunately became flattened and lost. Also the performativity of the music making is of essential importance. The manner Ceccaldi conducted his piece "Trois fois rien" was a good example of what's meant by performativity. Ceccaldi is a master of this. I am pretty sure a neurologist can measure this in terms of arousal level and brain waves of the listener. Lüdemann himself also was quite mobile during the performance while the other musicians were less mobile in terms of exteriorizing the punctuation and movement of sound and its line. It is additionally obstructed by the high stage that forms a perceptual barrier while the simple seating as a whole is positioned at ground level. It is not for nothing that the audience partly follows the proceedings standing at the back of the hall. It is obvious that the hall's setup is oriented to a different kind of musical experience.

By this I do not mean that musicians have to show hyper expressive behavior. Exteriorization can also be very subtle and minimal. Most important is the effect on the perception of the listener. (S)he should be enabled to subconsciously notice/register the interactional traces. Eve Risser's White Desert Orchestra is a good example for the working of this. It is above all a question of collective awareness of this aspect. Emplacement and alignment of musicians/instruments on stage is also an important factor. For instance in TEE the drummer was placed almost invisible in the back on the right side (audience view) while in the WDO the drummer is mostly placed visible in the center in the front line.

If a European country wants to present and promote its musicians in another European country it is an obvious and natural approach to go to that country and match and combine musicians from both countries to foster enduring exchange and artistic development. That is what Jazzdor has done for the past 12 years. Other countries have different, often unilateral approaches or leave it to the musicians themselves to join forces and collaborate. It is a mystery why France still is the only country consequently following the bilateral route. My impression is that this and other measures actually facilitate access of French musicians to foreign audiences, labels and collaborations with musicians in other countries and consequently becoming a known or even popular name. Germany, but also Eastern European countries, clearly show that. On the other hand, you can see that for example musicians from Eastern Europe migrate(d) to France and asserted themselves on the French scene.

An event such as Jazzdor Berlin is embedded in a larger interlocking supportive infrastructure, as the part Jazz Migration, which was created in 2002 for young upcoming musicians and groups. Every year Jazz Migration chooses four units to give training to in order to help build their career nationally and internationally, and to support them by organizing concerts in venues and at festivals (about 10 for each unit). The yearly chosen units are also adopted by a major venue or festival.

Participation at events like Jazzdor Berlin is one of the possibilities. This year two of the four selected groups, Ikui Doki and Novembre, participated in Jazzdor Berlin to give them international exposure. Ikui Doki is adopted by Paris Jazz Festival and the group Novembre by festival Banlieue Bleu.

Conspicuously some of the musicians of the two groups have performed earlier at Jazzdor Berlin (cumulative effect). In that context, and with its long-term approach, Jazzdor can be considered a breeding ground for the artistic growth of young-up-and-coming as well as for established musicians and groups (see also my review of Jazzdor 2017 Strasbourg).

The other eight units went with their music along a couple of different trails. They reworked folk music sources (Bedmakers, Michel Portal 5), played energizing straight ahead (François Corneloup Quintet), worked round spurt and slowing down (Roberto Negro DaDaDa), dealt with heavy real time creation (Dimitriades/Lemoine/Parkins) and did their thing with playfully orchestrating particles and giving it transient shape (Pablo Held Trio, Novembre).