By Nicholas Krolak
June 9, 2021
Sign in to view read count
Throughout jazz history there has been a desire among the jazz community to see the music respected on the same level as western classical music. It is after all, jazz is America's classical music. As Dr. Billy Taylor explains, "Classical music must be time-tested; it must serve as a standard or model; it must have established value; and it must be indigenous to the culture for which it speaks. Jazz meets the criteria of classical music. Because it is particularly sensitive to historical and sociological trends in America, it also represents a unique American tradition."

One can see a glimpse of the desire for recognition and respect in Pannonica de Koenigswarter's book Three Wishes, in which she compiled the responses of many jazz legend's responses to the question, "If you had three wishes, what would they be?" There are many different responses, but one obvious trend can be seen in the below excerpts:

"Complete acceptance and recognition of this music as a pure art form." —Elvin Jones

"I wish to live to see the day when jazz is recognized." —Johnny Griffin

"That America would recognize it as true art." —Charlie Rouse

"I sincerely hope that the roots of jazz will be universally accepted." —Dizzy Reece

"I wish there was a greater acceptance of jazz." —Ronnie Mathews

"That the musicians would get as much as they're supposed to get when they work." —Jimmy Cobb

Dr. Bill Taylor builds on this sentiment: "Jazz is America's classical music; yet many Americans have been consistent in their bias against it. They believe that Western European classical music is superior to any other in the world and, therefore, the only music that warrants serious and intensive study. This belief has resulted in the systemic exclusion of jazz and other Afro-American music from much of the American cultural experience. For the most part, this music has not received the serious attention it deserves from educators, media programmers, professional concert performers, or funding agencies. Therefore, the general public has been deprived of appropriate exposure to jazz and accurate information about it."

These statements describe the disparity between jazz and classical music in America. However, these words are of the past. Where are we today on this score? Almost forty years since Dr. Taylor penned these words; is jazz now on equal footing with Western classical music? And how could we even quantify such an inquiry?

Before we get to these questions, let us take a step back.

During the pandemic, with no gigs and tons of unwanted free time, I got into coding and data science. After taking an online class, I volunteered to help a local nonprofit build a database of arts funding in Philadelphia. This project looked at what philanthropic organizations gave to which arts organizations, when, and how much. It turns out this data is publicly available through tax records and relatively easy to mine. While looking through the data I would see repeatedly, large philanthropic organizations giving WAY more money and to a significantly larger number of classical organizations than to jazz.

After that project concluded, I decided to go back to the tax records with my newly acquired skills and see if I could compare how much more classical organizations received. I decided early on to focus on nonprofit organizations that were purely jazz or classical oriented and excluded conservatories and universities. This was since it is difficult to see how funding would be split once inside the organization since the tax forms only provide an overview.

Once these constraints were established, my first step was to find all the jazz and classical nonprofits. I did this through several keyword searches in the organization titles and mission statements. After compiling this list, I used a bot to extract the data from their respective 990 forms from the most recent available year and compiled the data into a dataset.

The first problem I encountered was that their were far more classical organizations: 3,000 classical to 800 jazz, so any comparison would immediately be skewed. The second problem was that the jazz organizations got really small (in terms of total revenue) after about the 70th organization and didn't have to fill out full 990 forms, which made comparing them to the other organizations more difficult. To fix these problems I decided to focus on the top 100 organizations, that is the top 50 jazz and top 50 classical in regard to their total revenue for the most recently available year. The resulting study, published here, compares these organizations on 27 different categories, most of which came directly from their 990 forms, and a few as aggregate statistics from those categories.

Back to our original questions.

My study shows that among the top 50 jazz and classical organizations, classical indeed gets the lion's share. Before we get into the numbers, consider these visualizations.

First is a map representing the organizations by color (classical = orange, jazz = blue), location of each organization, and size (which represents total revenue).

The second image shows the classical and jazz organizations side by side, irrespective of location. 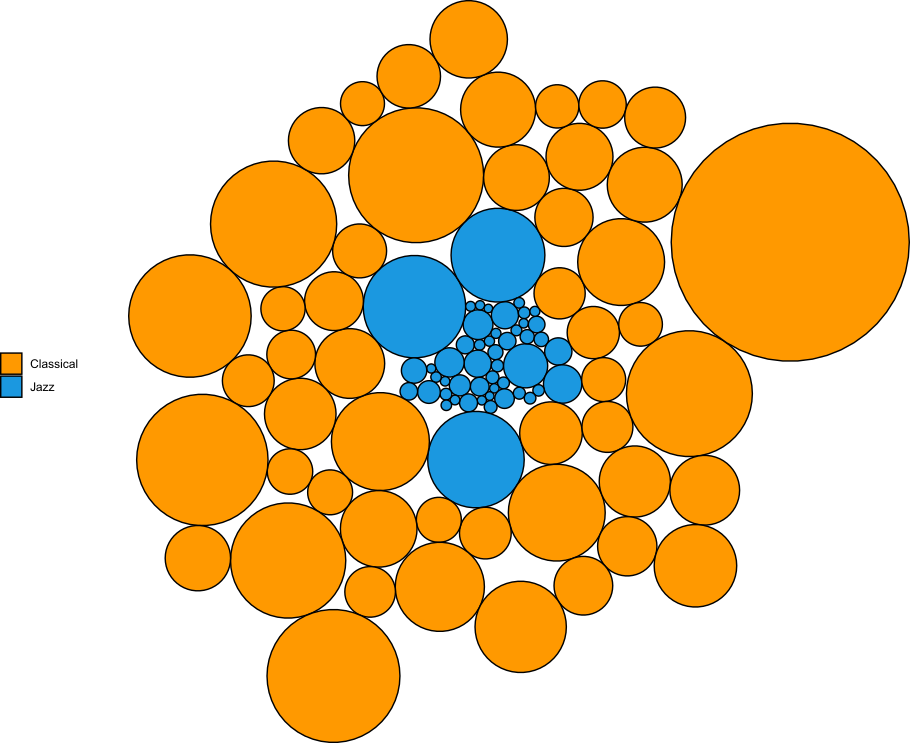 The final image takes the first two images one step further, showing all 50 jazz organizations in relation to the top 1 classical organization (The Metropolitan Opera). 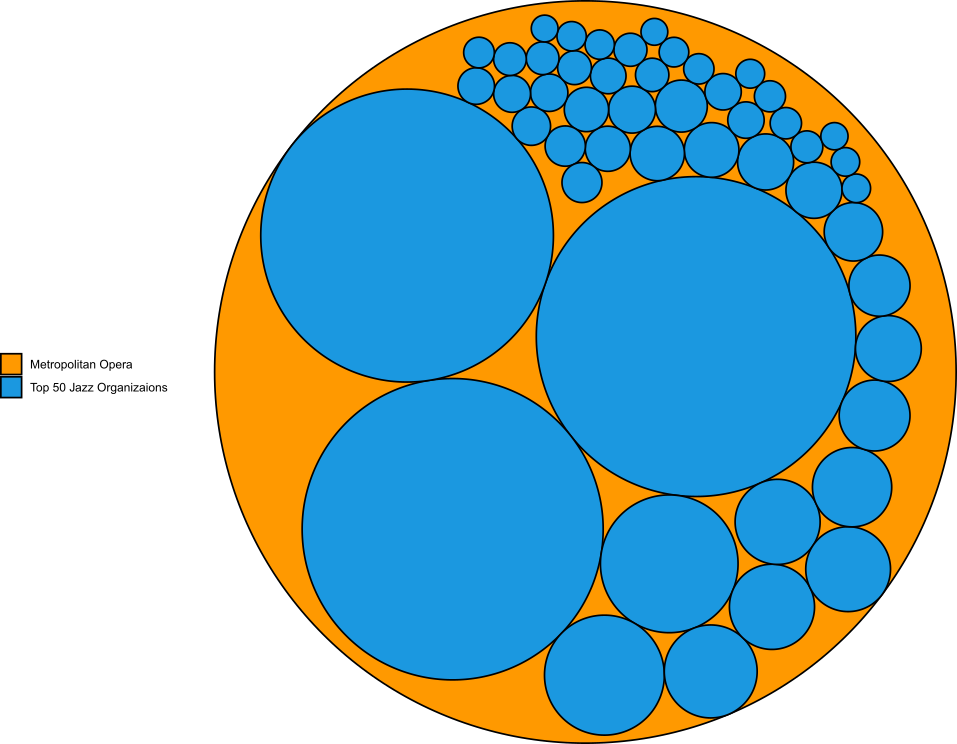 Now to some numbers:

Below is the distribution of total revenue among all 100 organizations. Once again, classical is orange and jazz is blue. The y-axis represents millions of dollars. 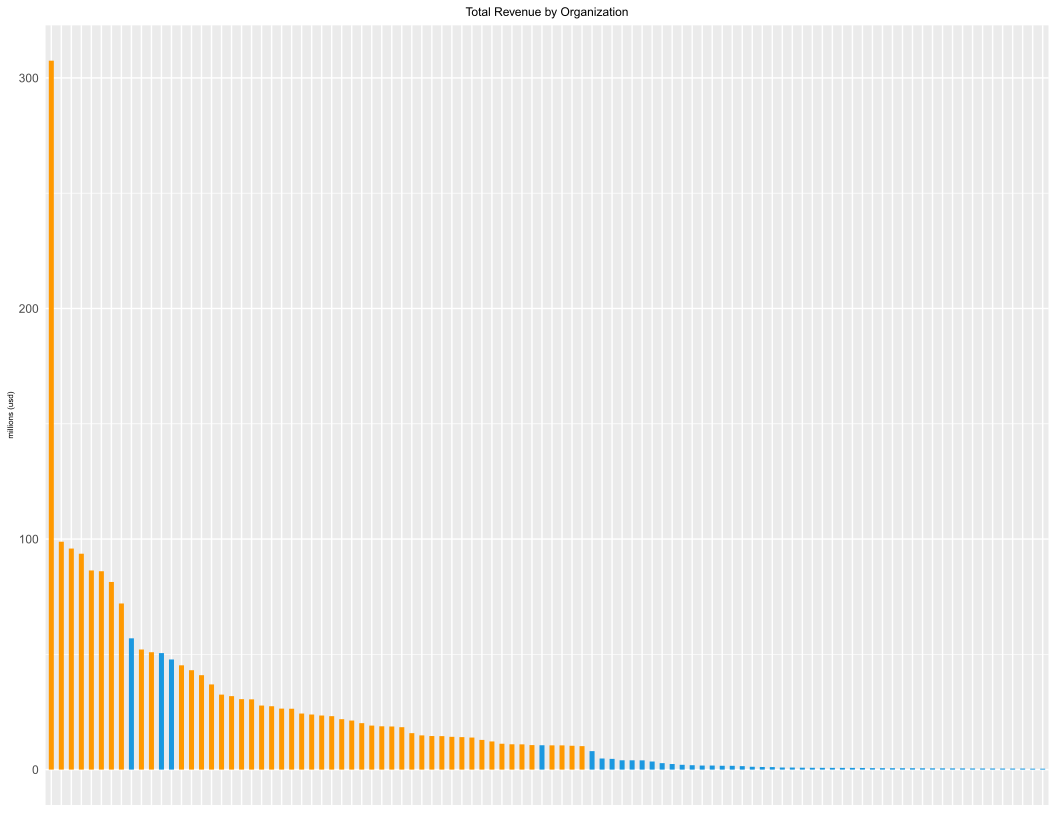 Below is the distribution of grants/contributions among all 100 organizations. Once again, classical is orange and jazz is blue. The y-axis represents millions of dollars. As you can see much the same pattern exists as for total revenue. 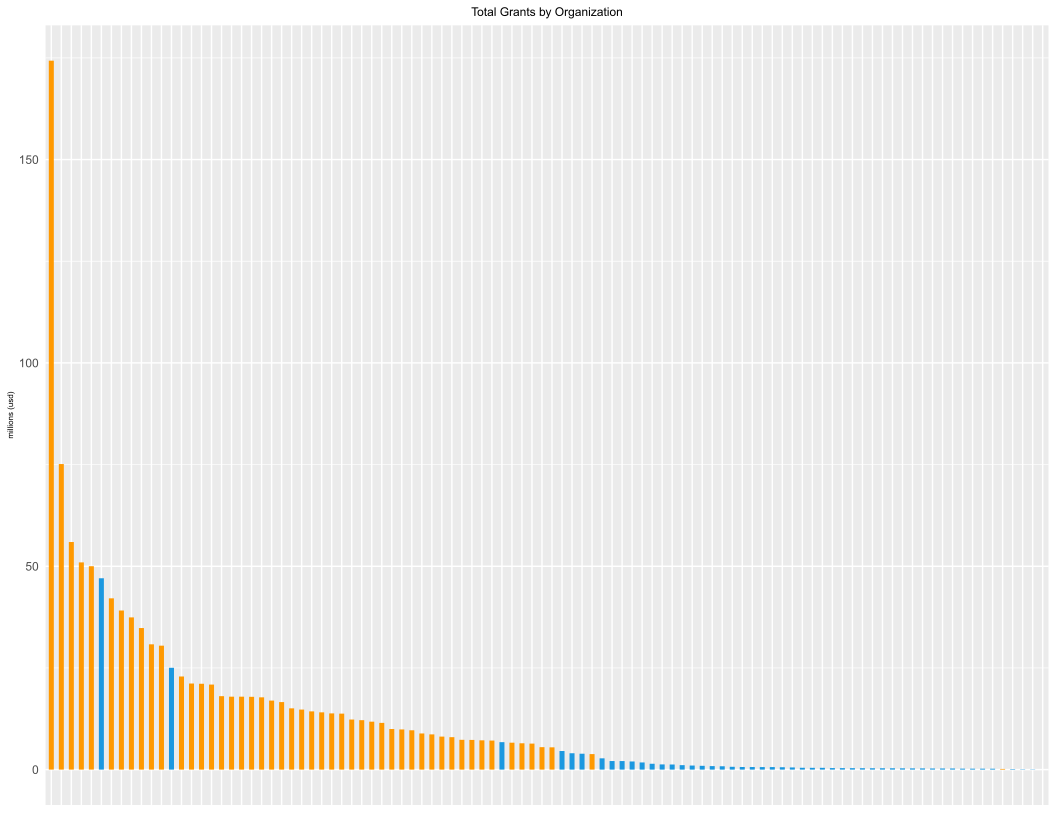 Below is a chart that shows how this breaks down in a city, specifically in my city, Philadelphia. 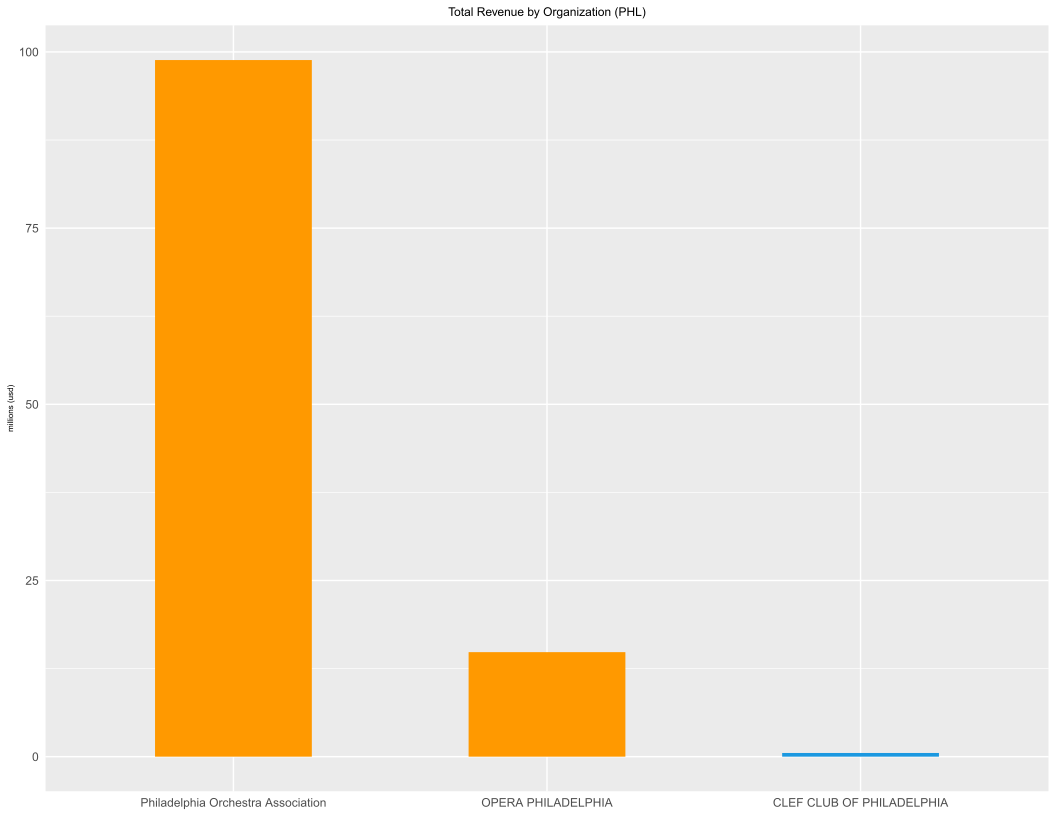 I won't belabor the point with more graphs, the entirety of which can be seen here, but I will leave you with a few more numbers:

In conclusion, let us consider:

Why does this funding deficit exist? What can be done about it? and... What would the jazz ecosystem look like if jazz Institutions were funded on the same level as their classical peers? 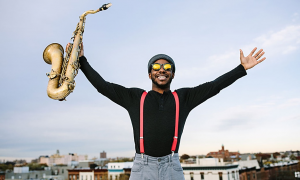 Seven Free or Inexpensive Ways to Get Featured At All About... 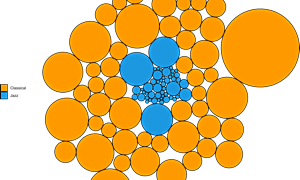 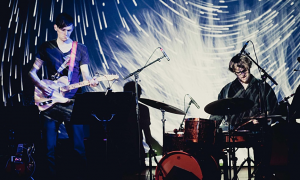 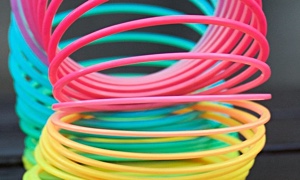 Media and Industry Tips for the Accomplished Jazz Musician