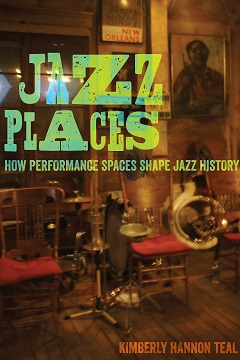 The most famous jazz venues, with a small number of notable modern-day exceptions, are the stuff of jazz lore and legend, tethered inextricably to the bebop era and a romanticized notion of jazz that forever paints it as bohemian, underground and for the cognoscenti. This image has outlived the clubs themselves and persists despite the radical changes in—and surrounding—the music in the ensuing decades.

The venues, like the music, have also changed. The jazz club, a dwindling species, has been replaced to a large degree by the concert hall, jazz studies programs and festivals as the primary places where jazz is seen and performed. In this fascinating book, Kimberly Hannon Teal, Assistant Professor of Jazz History and Jazz Theory at the University of North Texas, examines some of the very different types of places that present jazz. In doing so, she sheds light on how jazz is used to convey various meanings that feed into understandings of its history.

By placing the focus on jazz places—their structure and location—Hannon Teal posits, we can understand much about the often-conflicting notions of jazz history. How venues present jazz, the author reasons, influences our understanding of both the music's past and its future.

One hypothetical gets to the crux of the matter: even were it possible to interchange the locations of New York's The Village Vanguard and New Orleans' Preservation Hall, the author suggests, it would not guarantee their continued economic or artistic success. Both venues cater to particular and quite distinct niche musical markets, presenting sounds that are tightly bound to: "shared ideas of place and heritage that extend beyond their walls to the broader neighborhoods and cities they inhabit...."

So, New York for bebop/mainstream jazz and New Orleans for traditional jazz. That might not sound like a revelation, but the author's careful analysis of the physical spaces housing jazz, the very bricks and mortar, glass and steel, is revealing of far greater narratives at play.

Preservation Hall, a New Orleans landmark, is a case in point. In spite of the venue's name, its weathered appearance, both outside and inside "makes clear that the passage of time continues to subtly shape a venue with roots in the past that has none the less, kept moving through the present."

Allan and Sandra Jaffe, a young white couple from the Northeast who founded Preservation Hall in 1961, seemed to know exactly what they were doing. In a 1969 interview Allan Jaffe said the venue was: "probably the way someone from out-of-town pictures what a place in New Orleans should look like."

The author smoothly navigates the knotty relationship between historical ideas of what jazz in New Orleans might have sounded like at the dawn of the twentieth century, the early records of traditional New Orleans jazz that first captivated the Jaffes and set them on their path to "preserve" the music, and Preservation Hall's status as "a place in which live presence and mentorship take precedence over the reproduction of early jazz as heard on record..."

Bound up with all of this are the complex racial aspects of the traditional revival and the economy of traditional jazz, in both the past and in the present. If the vogue for record collecting in the 1930s was what drove the mid-twentieth century revival, a large proportion of its practitioners and audience, Hannon Teal reminds us, was predominantly white.

The lack of the music's commercial viability appears to be the main reason why black musicians were not drawn in significant numbers to the traditional jazz revival. There were, we learn, other reasons, as one white performer at the time later noted: "The young black musicians I encountered had a visceral response to the new sounds and challenges of bop, to Miles Davis and John Coltrane. The New Orleans idiom was something they left to us."

For the often poor and ageing black musicians who did play Preservation Hall when it opened, the gigs were an economic lifeline. For today's musicians, including the Preservation Hall's touring band, it is an equally important source of income. But as Hannon Teal notes: "The success and longevity of Preservation Hall as a venue is rooted in its marketability as a valuable tourist experience."

The visible appearance of jazz venues is one thing, their degree of actual visibility is another. While tourists to New Orleans flock to Preservation Hall, their counterparts in New York would have struggled to even find John Zorn's original version of The Stone. A non-profit venue dedicated to experimental new music, The Stone opened its doors in 2005 on the corner of Avenue C and 2nd Street. The site of a former Chinese restaurant, It's low-key façade—with precious little to advertise its presence to passers-by—and its deliberately spartan interior seemed to represent, the author writes, an "intentionally marginal position..."

Zorn trumpeted the "magical" qualities of the original The Stone and, seemingly, its outlier status as a venue for those in-the-know about cutting edge new music. The venue's eventual move, in 2017/2018 to The New School's Glass Box Theatre in the East Village, to a literally more visible and upmarket venue—and one nestled in the bosom of a major academic music institution—raises numerous questions about experimental music's cultural status ("I thought we needed something better," Zorn told the Village Voice in 2017) and its economic viability.

Hannon Teal unpacks the complex issues surrounding the venue's relocation, the labelling/non-labelling of music and also addresses debate around the fluid borders between experimental/freely improvised music and music that waves the jazz flag.

The author dedicates a chapter to examining university jazz programs and their relationship to their locale and broader jazz traditions. Faced by scepticism from without and battling to find a place within centuries-old academic institutions, the jazz programs seem caught between a rock and a hard place, navigating what Kenneth Prouty describes in his book Knowing Jazz: Community, Pedagogy and Canon in the Information Age (University Press of Mississippi, 2012)—whom Hannon Teal quotes— as "the enormous historical and practical power" of both the institutions and the jazz tradition.

Clearly, opportunities to gig and the amount of exposure to live jazz vary depending on whether one studies in New York or Omaha, for example, but Hannon Teal makes a convincing case both for the variety of jazz educational experiences available and for their connectedness to local, national and international jazz scenes. There is heap of food for thought here—for critics, educators and for those considering the jazz education path.

If university jazz programs represent the relatively new in jazz history, then The Village Vanguard, which opened its doors in 1935, has very strong ties to jazz' past. Yet as Hannon Teal relates, the very consistencies of this most famous of jazz venues, from its physical aesthetic to the type of music programmed, increasingly set it apart from other jazz clubs in New York and indeed nationwide.

The weight of the venue's jazz heritage—seen in the dozens of live albums recorded there by a who's who of jazz greats—and underlined by the tourists who arrive like pilgrims, create what the author words as "a construction of what jazz is and has been that resonates outward beyond the physical limits of its famous red doors." Concretely, Hannon Teal examines the music of Fred Hersch and Ethan Iverson and argues persuasively that the crossroads of place and heritage at the Village Vanguard is reflected in the music that they—and others—play there.

From small jazz clubs to major arts centers. The chapter comparing and contrasting Washington's Kennedy Center, New York's Jazz at Lincoln Center, San Francisco's SFJazz and New Orleans Jazz Market, places in relief how the imposing architecture of these buildings and their placement lend weight and authority to their respective missions.

The debate surrounding Wynton Marsalis's JALC, specifically his limited definition of jazz, is an old story, but Hannon Teal gives it a fresh spin, emphasizing that it was precisely JALC's narrow vision of jazz history that brought into being—almost out of necessity— the alternative definitions as espoused by Kennedy Centre, SFJazz and New Orelans Jazz Market. Suffice it to say, there is a lot of meat on the bones of this chapter: the complex power relationships between dead and living artists; the contrasts in venue programming styles; jazz' high-art credentials; and the author's analysis of Marsalis' understanding of jazz as being "grounded in a particular vision of Afro-American masculinity."

An insightful and thought-provoking read from first to last, Hannon Teal steers the reader through the intricacies of the construction of jazz histories. And these histories are inextricably bound up with the places where jazz is performed. It will be difficult to attend any jazz event, anywhere, after reading Jazz Places... without taking a closer look at the brick and mortar, glass and steel.