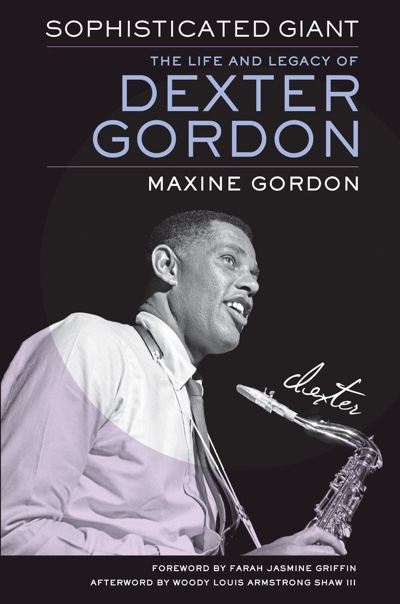 Maxine Gordon was the last of Dexter Gordon's several wives and she has written a biography of Gordon, a task with which he charged her before he died in 1990. The saxophonist had actually done some writing on an autobiography before he died and Maxine Gordon was able to use this material in her book. But, while he had written about most of his life, he wrote nothing about the 1950s, a period that he would not talk or write about. Her extensive research illuminates that decade as well as most of the other phases of this well-known jazz musician's life.

Gordon's was both a charmed and a difficult life. He was born into an accomplished family and was a gifted musician-competent enough to join Lionel Hampton's band on the road when he was 17 years old. He was also drawn to drugs early and addiction remained a part of his life until the 1970s. At least, I think that marked the end of his use, but I'm not positive. That's because the book makes clear the chronology of his drug use, his incarcerations, being "clean," and family life in some phases of his life, but in other times, less so. The author seems to have set herself up in a bit of a cleft stick. On one hand, she says that her intent is not to soft-peddle the rougher details of his life. On the other hand, Maxine Gordon is very invested in showing us Dexter's optimistic nature and the fact that several times he arose, phoenix-like, from events that others would not have been able to transcend.

The author's approach toward Dexter's battle with drugs is presented in as low-key a way as possible; to drain it of any moral judgmentalism. Her analysis of the draconian drug laws of California in the '40s and '50s shows what a trap these were for any addict and particularly so for the black jazz community of Los Angeles.

Maxine Gordon's approach to the difficult relationships in Dexter's life is similarly low-key; almost off-handed. She has a child by trumpeter Woody Shaw, who often played with Dexter. She and Shaw parted company and she began a relationship with Gordon. I'm not looking for dirt, but I would like to hear more about the emotional aspect of these shifting relationships. She wraps up their decision to get married in two sentences: "Looking back, it seems so simple, but this was not an easy decision. It was fraught with drama, anger and jazz gossip." I think it's the author's responsibility to give the reader a fuller sense of the human dimension of the process.

The same might be said about her approach to Dexter's relationship with previous wives and children. No doubt it might have been tricky for Maxine Gordon to win the cooperation of the families with whom he spent so little time. But I do think that some attempt at outreach and recording the results of those attempts is a job that a biographer should undertake. It stands to reason that this would help create a more dimensional portrait of the protagonist of this story. It feels like this was sacrificed in the name of "uplift."

Apart from this, I have no other major issue with the book. The writing is clear and we are moved swiftly and chronologically through the phases of an eventful life.

There is no attempt at musical analysis, per se, but there is a very interesting analysis of the relationship between the jazz musician, the musician's union and the recording companies. One section shows clearly that the settlements of the two recording bans instituted by the musician's union during the 1940s did not redound to the financial benefit of jazz musicians. The tenacity of jazz musicians despite the continually tenuous financial prospects is given its rightful due here. This shared experience of continuing to advance the music in the face of adversity built a tremendous sense of community among the musicians and Maxine Gordon makes a point of showing how important it was for Dexter to be a member of this community. He was a beloved comrade, clearly always generous in acknowledging the help of other musicians and in providing gigs for others when he could.

The details concerning Dexter's life in Europe are a solid contribution to the literature concerning expatriate American artists. In his case, there seems to have been no single revelatory moment when Dexter said, "I'm sick of this country, I'm gonna get away." In fact, a chance encounter with Ronnie Scott in NYC led to an invitation to play in Scott's London jazz club. Then, one overseas gig-and one romance-simply led to another, until about fourteen years passed. In fact, Dexter came back a number of times to play in the U.S. during this period, but the return that people remember is that of 1976. The splash he made during that successful series of gigs was the result not only of his own hard practice regimen, but of a year's worth of planning by a number of people, including Maxine Gordon, Bruce Lundvall of Columbia records, record producer Michael Cuscuna and others. It was a triumphant return, but the groundwork had been skillfully laid.

The other major artistic event covered here is Dexter's appearance in the film "Round Midnight" and his eventual Academy Award nomination in his role as Dale Turner. He had grown up a movie fan in L.A., had acted, written music and played sax in the West Coast production of the play "The Connection" in 1960, and was very confident about his ability to act. Says the author: "He felt that most jazz musicians could act if need be. They had to act their way out of a lot of situations in their lives on the road, and they had to act in front of an audience most nights."

Dexter's participation in the film was initially conceived to be much more limited, but his prowess as an actor was so obvious that his role was eventually increased until he because the lead player. I was very impressed with his performance and, generally, with the film itself, which did not fall into most of the usual cliché traps. Reading this account, I can see that Gordon had a lot to do with that, as he had no hesitation in telling director Bertrand Tavernier when he thought the dialogue or setups were phony. To Tavernier's credit, he listened. I was slightly disappointed in the music chosen for the film, as it was almost all ballads or slow blues; in keeping with the "romantic" look and feel of the film, but not in keeping with the way Dexter can burn on up-tempo tunes.

It was interesting to read the change in how Dexter Gordon was treated following his Oscar nomination. He had always been jazz royalty, if you will, but that had yielded only minor financial rewards-being able to buy a modest home. But now that he had been touched by the magic fairy dust of Hollywood, he was given the deluxe treatment of a movie star.

Maxine Gordon may not have given us a complete portrait of Dexter, as she does not explore some of the more difficult areas of his personal life, but she does paint a convincing picture of an extremely charming, intelligent, resilient and talented man. In the end, I think that the author's quote from Dizzy Gillespie seem apposite: "Dexter should leave his karma to science."