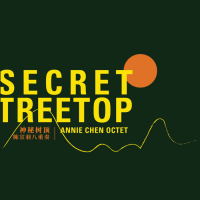 Over the years, jazz has widened its horizons to encompass a broad range of music that many of those who practiced and/or appreciated the more traditional forms might not recognize, let alone endorse. Among the more recent genres is "world music," which embodies various rhythmic and harmonic elements of jazz without assimilating its core values. On her second album, Secret Treetop, composer/vocalist Annie Chen's octet performs world music and does it well—but it is only narrowly akin to jazz in its more established framework.

Chen, born in Beijing and based in New York City, draws her inspiration from many sources—eastern Europe, Japan, Taiwan, the classical canon, soul, funk, her native China and, to a lesser extent, American jazz. In addition to seven of her wide-ranging compositions, Secret Treetop includes folk songs from Inner Mongolia ("Ao Bao Xiang Hui," or A Date in the Yurt, whatever that means) and Taiwan ("Gan Lan Shu," or Olive Tree). Chen sings these songs in Chinese, the others in English save for the album's lone (almost) instrumental track, Chen's "Mr. Wind-Up Bird, Secret Longing," arranged (as were the others) by guitarist Rafal Sarnecki. It should be noted that Chen has maintained a rather pronounced Chinese accent, making her vocals more than a touch unclear; luckily, the lyrics to each song are provided in the album's booklet. Those sung in Chinese are reproduced in that language.

Even though vocals and ensemble are in the ascendant, the session is not devoid of improvisation, with violinist Tomoko Omura and pianist Glenn Zaleski soloing to good effect on "Orange Tears Lullaby." Enticing ad libs are fashioned elsewhere by Sarnecki, trumpeter David Smith and alto Alex LoRe (who sparkles with Sarnecki on "Mr. Wind-Up Bird"). As to Chen's lyrics, they often conform to a visible Chinese pattern too, as though they'd been written (as indeed they were) by someone whose primary language is not English. Be that as it may, it is Chen's compositions, and not her lyrics, that lend the album its import. And even though it strays rather far from what many observers would consider jazz in the truest sense of the word, Chen does what she does quite well. High marks for that, with the caveat that the credible jazz content in Secret Treetop is minimal at best.