Trumpeter Jay Phelps, a native of Vancouver who moved to the UK in his teens, first came to the attention of the British jazz scene as a member of Tomorrow's Warriors. In his early 20s he co-founded Empirical, playing on that band's debut album Empirical (Destin-E Records, 2007) before leaving in 2008. He released his own first album, the bop-inspired Jay Walkin' (Specific Jazz) in 2010. A fan of classic trumpeters like Roy Eldridge and Dizzy Gillespie, as well as the bands of Duke Ellington and Count Basie, Phelps long harbored an ambition to lead his own big band. In 2011, he has started to do just that and on the evidence of its appearance at Snape Maltings, the Jay Phelps Big Band is an impressive ensemble.

This is a young band, both in terms of the relative youth of many of the musicians and the age of the band itself—having made its debut earlier in 2011, it had played only a handful of gigs before this concert. On one or two occasions the band's youth showed in a slight hesitancy, a little uncertainty among the players—such as the opening bars of "Skylark"—but for the most part the playing was so tight, so hard-hitting and just right that it seemed like a far more experienced ensemble. This tightness is a tribute to the talents of the individual musicians, but it's a particular tribute to Phelps himself. The young bandleader shows great maturity in his choice of music, his arrangements and his ability to control 15 different jazz musicians while also delivering some exceptional solos of his own.

The trumpeter might have been forgiven for sticking to tried and tested big band standards, familiar and recognizable tunes that could be greeted as old friends by the sell-out audience. But he's not scared of taking a risk, and he mixed a few of his own compositions in with the American Songbook numbers and established tunes from the bands of Basie (Neal Hefti's "Flight of the Foo Birds" and Frank Foster's "Shiny Stockings") and Ellington ("Such Sweet Thunder"). Most impressively, the band played two movements from Phelps' new four part suite "Movements For The Modern Artist"—the second, "My Sole Endeavor," and the fourth, "My Gift." These two pieces emphasize much of what makes Phelps' big band such an exciting musical prospect: they are ambitious, complex compositions that stretch the skills of the musicians, and they show Phelps' superb command of dynamics and mood. 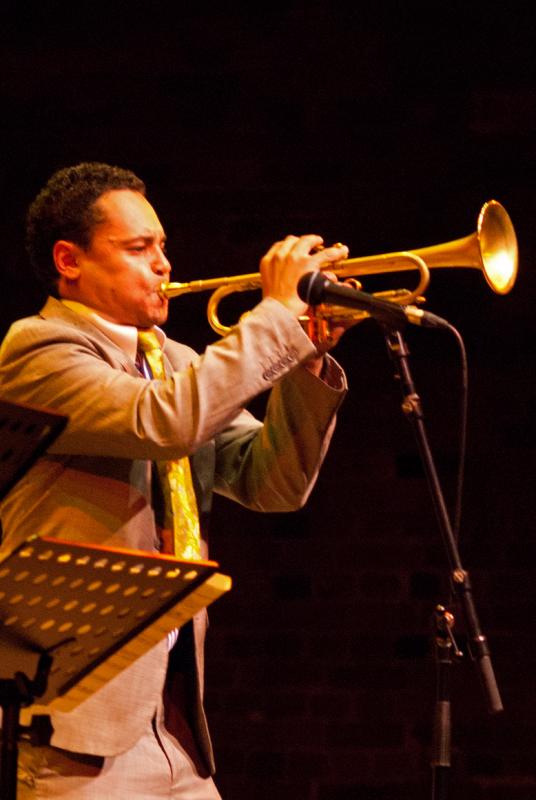 Phelps (pictured left) has gathered some of the best of the younger generation of jazz musicians together to form this band. On this night trumpeter Steve Fishwick, tenor saxophonist Shabaka Hutchings and alto player Zhenya Strigalev all contributed some impressive solos while bassist Tim Thornton took the spotlight on "One Bass Hit." The trombone section was a little under-used in comparison to the trumpets and saxophones, though its short but emphatic introduction to "My Gift" got that tune off to a great start.

Vocalists Clare Teal and Cleveland Watkiss, two of the most experienced of the performers, each joined the band as soloists. Teal is an experienced big band vocalist and showed a seemingly effortless command of some classic songs, contributing beautiful versions of "A Foggy Day In London Town" and "Cheek To Cheek." Watkiss swung on the big band arrangement of Phelps' own "I Love My Mama," getting to grips with its tricky mix of sung and spoken lyrics. The singers also duetted on a couple of tunes, including a rousing encore of Memphis Slim's "Everyday I Have The Blues."

Phelps, Teal and Watkiss all showed an easy confidence in front of the audience. Phelps talked happily about each tune, his influences—such as the time bassist Ray Brown suggested that the 16-year-old Phelps check out trumpeter Freddie Hubbard—and his love of jazz. He covered an impressive distance around the stage, conducting from the front, playing in the rear as part of the trumpet section and prowling from section to section to encourage his fellow musicians. Phelps is also a sharp dresser, his strong visual image coupling with his easy and friendly manner to create a charismatic front man.

If there was ever a time when running a big band was the quickest way to make a fortune, that time has passed. But there is still a visceral excitement to be gained from experiencing a top rate ensemble in full flight, and any musician willing to put together such an ensemble and get it out on the road deserves applause. The Jay Phelps Big Band may be the new kid on the block, but it's already a powerful musical force, a great live experience, and with Phelps at the helm its potential is almost limitless.