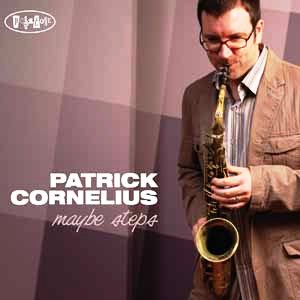 With the talent to convey thought-provoking stories through his music, Patrick Cornelius pens a fresh chapter of personal and emotive composition in Maybe Steps, his third release as a leader. The recording follows the alto saxophonist's well-received debut, Lucid Dream (Self Produced, 2006) and the more groove-oriented Fierce (Whirlwind Recordings Ltd., 2010), both filled with robust writing, tight musicianship, and distinction.

The mode here is modern mainstream, but what gives the recording its verve is Cornelius' intricate use of straightforward melodies, evocative themes, and gripping contributions from his band mates. His attributes are coupled with a piercing tone, sharp technique, and a leader's acumen—that ability to assemble and extract the best from new heavies such as pianist Gerald Clayton and drummer Kendrick Scott.

Cornelius' imagery is vivid. It comes to life in "Christmas Gift," with Clayton's effervescent, roiling piano chords and Scott's turbulent sticks, or the enchanting lyricism of "Bella's Dreaming," inspired by the saxophonist's observation of his three month-old daughter's sleep habits. Yet, in contrast, the band turns up the intensity on "Brother Gabriel" with a Latin-tinged progression that highlights Scott's amazing onslaught.

The light also shines on the critically acclaimed Clayton, who plays with finesse on the title track (a fresh version first heard on the aforementioned Fierce ), providing just the right touch to Cornelius' melodic lines; adds splashes of color to the free styling "A Day Like Any Other"; and swings fiercely on Cornelius's unique take of pianist George Shearing's "Conception," which simply smokes, and features the incisive playing of another bright newcomer, guitarist Miles Okazaki.

The set closes with "Le Rendez-vous Final," a beautiful rubato-flavored piece that exudes a classic romanticism. It is another fine showcase of the multifaceted Cornelius, an emerging altoist who warrants a closer look.