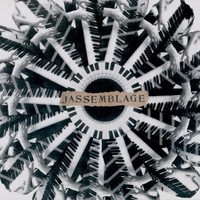 Veteran Manhattan-born pianist, composer and arranger, Theo Saunders, has been a driven artist since his days at the High School For Performing Arts. In the ensuing decades, whether in NYC or California, his devotion to improvisational music has led him to stamp his personal vision on the music he plays, whether composing compelling original music or rearranging standards.

Six years ago, after a typically unfettered, emotionally searing performance at one of LA's great jazz hangs, the late Charlie O's of Van Nuys, Saunders made the acquaintance of a true jazz devotee and equally driven artistic spirit, one of the last of the Beatniks, world renowned assemblage artist, George Herms. That night was the start of a beautiful and productive friendship.

Herms, for decades a familiar face at LA jazz venues, eventually enlisted Saunders, (along with another one of SoCal's prodigious yet woefully under-appreciated, creative musical spirits, trumpeter Bobby Bradford, to collaborate on a multi-media performance, "The Artist's Life: A Jazz Opera," that debuted at Disney Hall's RedCat space in 2011. Appropriately, Saunders arranged a musical assemblage of several jazz classics to accompany Herms' performance. The evening's no holds barred, artistic and musical explorations were recorded and included as a DVD in Herms' retrospective publication, "The River Book" (Hamilton Press, 2014).

Fast forward several years and Saunders found himself inspired to continue his musical "assemblages" for his own recording project. On his self-produced CD, Jassemblage (TSM, 2015), Saunders reworked a number of classic jazz tunes so "that not only do the melodies, harmonies, and forms weave in and around each other, but the improvisations are based on a combination of the chord changes from each song." Having played these standards for many years, Saunders had a sense of the possibilities for some of these medleys, while on others, he instinctively discovered musical connections. Ultimately, Saunders hoped to capture in sound what Herms creates in his sculptural assemblages.

On the opening "jassemblage," Saunders displays the depth of his knowledge of, and passion for, the music of Thelonious Monk. He artfully weaves a multi-colored and multi-layered musical tapestry out of "Nutty," "Little Rootie Tootie," "Hackensack," and "Misterioso," to name a few, into a tune he calls "Nuttiness." Master Motor City trombonist, George Bohanon, blows a bouncy yet gentle solo, makin' that "bone" purr before closing with of a "quotation" from "Sonnymoon For Two." Then Saunders blasts off into the Monkian cosmos, followed by a bright and bluesy alto sax excursion by multi-reedist,Louis Van Taylor. The result is not only an homage to Monk, a seminal influence on Saunders' musical development, but a composition with the complexity of a Rube Goldberg contraption that never loses its swing.

On a jassemblage titled, "Rubistrophy," Saunders opens with high wire tension as drummer Kendall Kay lays down a sizzling layer of 16th notes, while the pianist paints a top coat with the classic vamp from "Epistrophy." Then veteran tenor saxophonist, Chuck Manning, counters with a cool breeze based on the "Ruby My Dear" melody.

On "Naimanox," a mash up of John Coltrane's "Naima" and "Equinox," Saunders employs Tyneresque power to drive the rhythm. Manning tears it up with a tenor solo that blasts off into interstellar space (an appropriate musical destination for someone whose day gig at JPL keeps his eyes trained on the heavenly bodies), while Henry "the Skipper" Franklin, a rhythmic anchor on the LA jazz scene for half a century, controls the groove on this "Trane" ride.

Growing up on Manhattan's Upper West Side, Saunders developed a taste for the sabor of Latin jazz and pursued it from an early age. He indulges this spicy, aural craving with a musical "mofongo" stew called "Caramanteca." The three horn front line works especially well with music that features the Latin "tinge," as Jelly Roll Morton called it.

Saunders closes out the recording with a funky, booty shakin' medley of James Brown's "I Feel Good" and Oliver Nelson's "Stolen Moments" that Saunders titled, "I Steal Good Moments." Who else to feature on this tune but Louis Van Taylor, who, for decades, has blown a mean sax for such funksters as the Godfather himself, James Brown, and these days, Kool and the Gang.

Driven by the inspired interplay between the rhythm section and the soloists, Saunders manages to achieve a big band sound with his stellar sextet. And his re-arrangements, which seamlessly create complex harmonic conversations among the musicians, never lose a visceral connection to the groove.