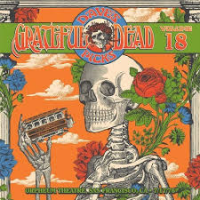 The Grateful Dead exhibit the positive effects of their self-imposed 1975 hiatus on Dave's Picks Volume 18 and its accompanying bonus disc recorded at the Orpheum Theatre in San Francisco. Of course, the quietly relaxed approach to the setlist, and the choices thereon, might well be signaled by the opening of Chuck Berry's "Promised Land"—the band played his material when they already felt REALLY good or were anxiously trying to—and the first set closing of "Johnny B. Goode."

But the Dead had a right to feel there was no pressure (except that of innate professionalism) in this hometown show, one of a six-night run: at the time this show took place they'd been playing together around the Bay area, in progressively fine-tuned alignments, for a decade. Plus which, they'd recently lightened their operational load by dispensing with the mammoth "Wall of Sound" and chosen to scale back in terms of venues they played as well: on their June return to the road they concentrated on comparably small sites prior to visiting much larger places like Roosevelt Stadium later in the summer and the autumn.

Though the customized graphics of the Dave's series remain constant, right down to the images on the discs themselves (a true sign of the Rhino Records labor of love ethic), recent titles have included a greater array of photos as well as reproductions of memorabilia such as the newspaper clipping that appear here; the temptation is to grouse about the absence of perspective offered by contemporary essays on the shows in question or the particular phase of Grateful Dead history in which they occur. But the inclusion of Blair Jackson's essay (from what source isn't credited), next to clippings from Frisco papers in the wake of the show(s), offers a different and more acute perspective than what had perhaps become too nostalgic for its own good.

SF Chronicle writer Joel Selvin may or may not agree with what he wrote at the time, but, given the stature to which he's risen in the band's community in the four decade interim, Jackson's ever-so-positive first impression no doubt correlates to his recollection. And so it should, although at a glance the occasion seems perfectly nondescript as documented on the three discs (plus a fourth offered as a bonus to subscribers of the ongoing archival series). Yet this is a deceptively adventurous performance, especially exploratory during the segues that constitute the better part of the second set, all knitted together by "Drums" and "Space" (in a purposeful departure, offered separately rather than in sequence), just before an open-ended "Jam" leads back to "The Other One."

This Dave's Pick is more than a little unusual in and of itself too. It contains not only the complete, unusually abbreviated show of the one night (out of six total at Frisco's Orpheum Theatre) and practically an CD's worth of performances from the night prior. As a result, for all practical purposes, owners of the triple-disc package and its accompanying bonus disc have almost two entire performances, during both of which, particularly7/17, the band chooses to go deep rather than wide (even stretching out on the second encore "Not Fade Away!").

Recorded by Betty Cantor-Jackson, who was also at the board for Grateful Dead Red Rocks 7/8/78 (Grateful Dead/Rhino, 2016), it's notable for the intimate ambiance of the audio in which keyboardist Keith Godchaux' piano is as prominent as Phil Lesh's peripatetic bass—hear "Samson and Delilah" in particular, plus the usual but nevertheless notable absence of audience noise throughout (the latter invariably adds nothing to hearing Dead shows anyway). The iconic band's vault has has never seemed like more of a treasure trove with the release of Dave's Picks Volume 18, concurrent with the aforementioned archival one-off.