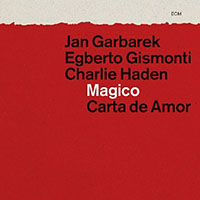 It's sure been a banner year for fans of the ECM label, with a slew of fine new releases from artists including guitarist John Abercrombie (Within a Song), bassist Arild Andersen (Celebration), pianist Tord Gustavsen (The Well), and saxophonist Tim Berne (Snakeoil). Previously out-of-print or never-before-in-print studio recordings from saxophonist Jan Garbarek (Dansere) and pianist Jon Balke (Magnetic Works: 1993-2001 ) are now back in circulation. And, for the first time since bassist Charlie Haden's duet record with pianist/guitarist Egberto Gismonti (2001's In Montreal, from a 1989 concert), the label has dug back into the past, with Terje Rypdal's Odyssey: In Studio & In Concert coupling the guitarist's 1975 classic, Odyssey—finally on CD in its full, two-disc glory—with a previously unreleased Swedish radio performance, Unfinished Highballs, and Sleeper: Tokyo, April 16, 1979 debuting a full concert from Keith Jarrett's influential European Quartet.

The year's not over by a long shot, but Magico: Carta de Amor may ultimately emerge as ECM's most significant archival release to date, trumping the Jarrett if only because, as superb as it is, Sleeper is not the pianist's first live recording with this group to see the light of day. Culled from live performances by a relatively short-lived trio that, with Magico (1980) and Folk Songs (1981), already stood as one of label head Manfred Eicher's most inspired collaborative suggestions, Carta de Amor liberally expands on material from both studio dates, but also adds plenty of music that, if familiar to fans of Garbarek, Gismonti and Haden individually, has not been heard performed by this vibrant chamber trio before—and, in the case of Haden's uplifting "All That is Beautiful," appears on record for the first time.

The record demonstrates just how far this trio had come by the time of its April, 1981 performances at Munich's Amerika Haus—no surprise, given the established reputations of all three members, and that it had been almost 18 months since Folk Songs was recorded, just a scant five months after the Magico sessions. Gismonti's characteristically lyrical yet emotionally ambiguous "Palhaço" was a tremendous closer to Magico and a highlight of the Brazilian's more heavily produced Circense (Carmo, 1980), but here Garbarek soars even higher in a version nearly double both studio counterparts' length and, taken at a brighter tempo, indicative of this trio's profound interconnectivity, as all three players transcend mere soloing to interact at a near-mitochondrial level.

If, as a pianist, Gismonti has always felt a little more schooled—without suggesting either predictability or an inability to stretch boundaries—his more rough-hewn guitar work is the fulcrum on which both Garbarek and Haden balance on the bassist's Spanish-tinged "La Pasionaria," which he had yet to record at this point, and which would ultimately swing far harder and brighter on his Liberation Music Orchestra's Ballad of the Fallen (ECM, 1983). But if Gismonti provides the initial context, it's Haden who ultimately assumes role of both anchor and animator/instigator, in a free middle section that, despite form reasserting itself nearly ten minutes in to reiterate the theme, opens up once again for a closing bass solo that, in its muscular avoidance of grandstanding, is an early standout of Carta de Amor's 108-minute set.

Beyond Garbarek's arrangement of traditional folk songs ("Folk Songs," "Two Folk Songs"), the saxophonist's "Spor"—first heard on Magico, but reinterpreted, three years later, in more electrified form on Wayfarer (ECM, 1983)—is another example of this trio's remarkable connection, another piece that breaks down into the kind of collective free play that's only hinted at on the studio recordings. As ever, Garbarek's attention to purity of tone is a marker, here matched by Haden, who has always favored tone, texture and the right note over pyrotechnic displays and whose rare use of a bow here is another distinguishing point in a set filled with highlights.

Carta de Amor is a reminder of how a particular point in time, when the pan-cultural and cross-genre interests of three artists from vastly different backgrounds and musical upbringings, could come together in rare synchronicity. That such confluence couldn't have occurred before nor could it likely have happened again is only bolstered by Haden and Gismonti's subsequent In Montreal. A fine disc, to be sure, but without Garbarek, lacking that certain spark that clearly ignites throughout Magico: Carta de Amor, a set defined by selfless interplay, unrestrained yet ever-purposeful exploration, and the kind of power made all the more dramatic for Garbarek, Gismonti and Haden's ability to instantly change directions, as one, with the subtlest of gestures. In Galacian, "magico" means "magical" and "Carta de Amor" means "love letter," and in its decision to unveil Magico: Carta de Amor thirty years after the fact, ECM has delivered just that. The press sheet refers to the many recordings apparently made at Amerika Haus as "an artistic treasure trove awaiting further investigation." It sounds like the magic has just begun.