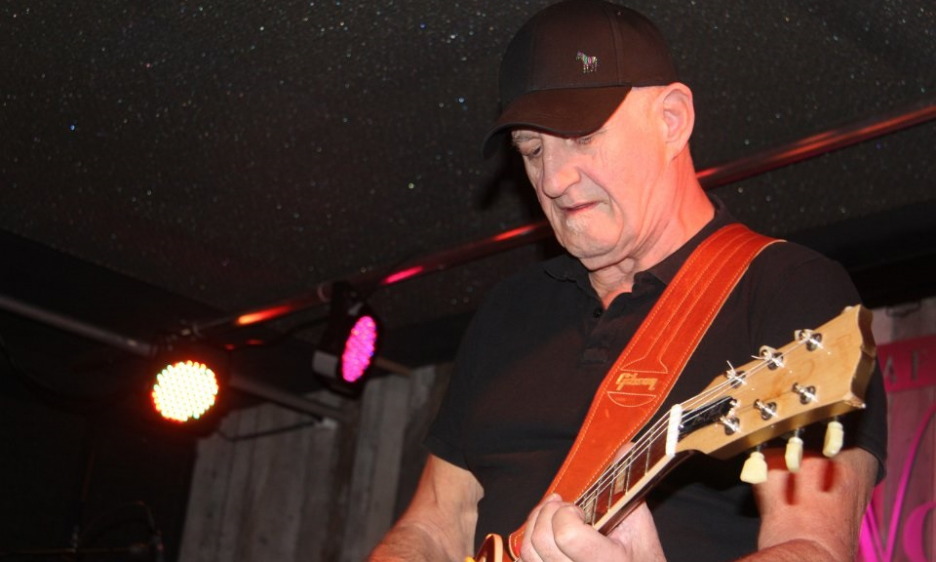 Is there a more exciting electric guitarist on the planet than Jan Akkerman? For most of those packing out Café de Noot the answer is no. When Akkerman is on form there are few electric six-stringers to touch him. His acoustic playing, classically informed, is no less impressive, but tonight it's all about letting rip and having fun. Akkerman doesn't play too many pub gigs but his annual pilgrimage to Hoogland's famous blues and rock venue brings out a little of the pub rocker in him.

Singer Laurie Akkerman—Jan's daughter—brings power and soul to a searing jazz-rock version of the Aretha Franklin anthem "Chain of Fools." Veteran Bert Heerink belts out Jimmy Reed's "Baby What you Want Me to Do" and then turns to West Coast blues with Lowell Fulson / Lloyd C. Glenn's gospel-tinged "Sinner's Prayer"—the latter a throwback to Akkerman's pre-Focus group, Brainbox.

The two singers combine on The Rolling Stones' "Gimme Shelter" and the R&B classic "If You Don't Know Me by Now." In between, De Leeuw, a fine, bluesy guitarist in the Duane Allman vein, displays his chops on an instrumental version of Gary Moore's "Parisienne Walkways." On this populist fare Akkerman is largely content playing funky rhythm guitar, a role he seems to relish almost as much as that of lead soloist.

There's more of Akkerman—guitarist and composer—in the second set. "Tommy's Anniversary," a reimagining of the Tom Barlage tune from Focus' Moving Waves (Sire Records, 1971), sees Akkerman at his most fluid and electrifying. Most of the audience are either clutching drinks or using their phones to video or photograph, resulting in underwhelming applause for Akkerman's visceral solo.

It's worth remembering that in 1973, when Focus was at the peak of its international success, Akkerman came top in a Melody Maker poll of the world's greatest guitarists, beating Eric Clapton, Steve Howe, John McLaughlin, Jimmy Page and Rory Gallagher, in that order. Four and a half decades later, Akkerman is perhaps a touch more selective with the notes, but he has lost absolutely none of his fire.

Virtuosity aside, a hallmark of Akkerman's playing is the range of vocabulary at his disposal. Nowhere is this better illustrated than on "Piétons." From its delightful country-blues intro, Akkerman and de Leeuw take it by the scruff of the neck, rocking out before settling into an infectious, grungy funk groove. Akkerman re-establishes the country-blues vibe before a brief flirtation with "Hocus Pocus"—Focus's trans-Atlantic hit single—provides a powerful coda.

Laurie Akkerman returns with a lung-busting rendition of Adele's "All I Ask." It might seem like an anomaly in this set of rock, jazz-inflected blues and driving funk, but as John Kelman's unparalleled review of Jan Akkerman's 26-CD box set The Complete Jan Akkerman: Focusing On a Life's Work (2018) underlines, the guitarist's career has been defined as much by his eclecticism as his virtuosity, including occasional forays into mainstream pop.

Akkerman turns back the clock with "Summertime," a staple of Brainbox's live shows in the late 1960s/early 1970s. Heerink takes to the task with gusto on a feisty, rock-cum-reggae version that's light years away from the Gershwins' original design. Akkerman, de Leeuw and Molenaar reserve some of their most passionate playing for the stirring set closer, "I'm Paying for it Now." The encore serves up another surprise in the shape of Bill Monroe's bluegrass anthem "Walk Softly on This Heart of Mine," with Laurie Akkerman and Heerink harmonizing over de Leeuw's elegant slide guitar and Akkerman's nimble country picking.

Amongst the photos on the walls of the notables who have played Café de Noot over the years is one of Clarence Gatemouth Brown. Best known as a Texas bluesman, the influential guitarist/fiddler equally embraced country, jazz, hoedown, cajun, zydeco, rhythm and blues, boogie, calypso and Louis Jordan-era rock 'n' roll during his long career. Jan Akkerman has rather a lot in common with 'Gatemouth' Brown. Hailed as a rock guitarist, Akkerman has never restricted his musical vision. Blues, rock, jazz, country, classical, avant-garde, pop -it's all meat and drink to the legendary Dutch guitarist.

Akkerman remains, as this entertaining gig testifies, an unclassifiable original.