Rhys Marsh: October After All

By Glenn Astarita
January 4, 2020
Sign in to view read count 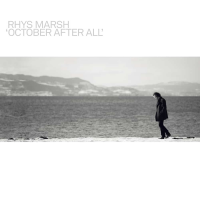 Hopefully, this alluring album by progressive rock multi-instrumentalist, composer, vocalist Rhys Marsh won't slip under the radar. It's an album that has staying power due to the artist's atmospheric and cleverly arranged works, largely containing memorably melodic hooks and emotive expressionism. Born in the UK, Marsh now resides in Norway, which has become a fertile region for the new prog rockers who often merge key components of this genre with personalized designs and mutable angles. In addition, Marsh states that "when I was writing this album, I was very inspired by music from the mid-to late-seventies, especially songs that had string synthesizers in place of Mellotrons." Hence, many distinct attributes of that classic prog era are subtly embedded in the artist's musicality on his third studio album.

" The Butterflies" begins with Marsh's tender acoustic guitar parts and sings with warmhearted undertones, and soars via his falsetto choruses in line with another hummable melody and wistful theme, shaded with what sounds like a Mellotron-based backwash. Here, 1970s prog antiquity is shadowed by his corpulent analog synth phrasings, along with a bit of oomph towards the finale. Similar treatments reappear during "22" due to haunting keys-based flute patterns atop a harmonious narrative. In short, Marsh deserves greater recognition and, in theory, could enjoy widespread appeal from a cross-genre perspective if afforded more global awareness. Note: there are 10 additional 'bonus' songs on the downloadable version.

River; Long Way Back; Golden Lullabies; Ride The New Wave; The Butterflies; Let It Be Known!; One Hundred Memories; The Summer Days; '22'; (It Will Be) October After All.