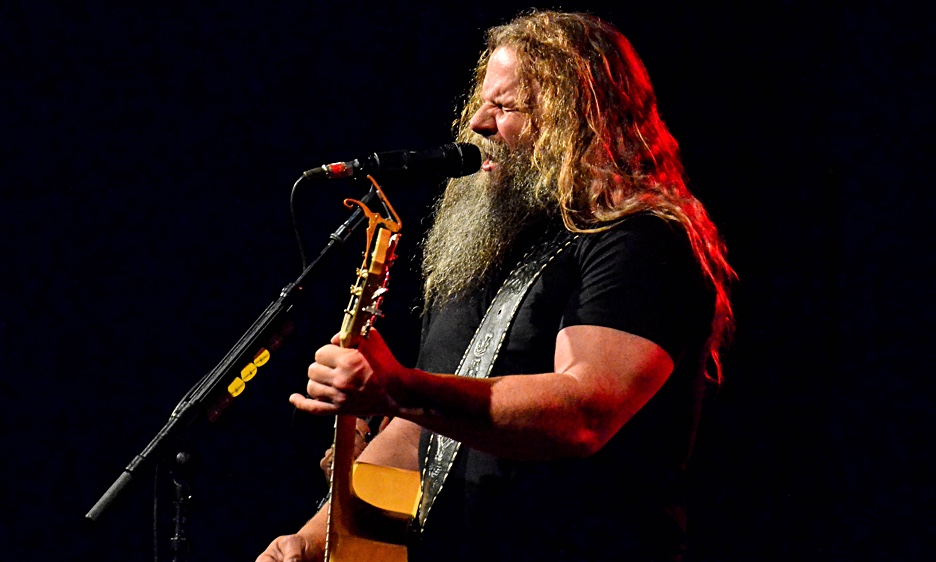 Jamey Johnson is a guitarist and songwriter who personifies the Americana musical genre. His music is a powerful mélange of blues, folk, pop, southern rock and, of course, country. Simply put: it is Americana, with Johnson practically the definition of Outlaw Country and/or Alt-Country.

Johnson also has quite the pedigree. During the course of his career he has written or co-written singles for Willie Nelson and Merle Haggard, Trace Adkins, George Strait, James Otto, Joe Nichols and Jessie James Decker. He has recorded with Alison Krauss, Emmylou Harris, Blackberry Smoke, Elvis Costello, Joe Bonamassa and the Blind Boys of Alabama.

He plays a big old oversized guitar that he calls "Old Maple," the Epiphone guitar Johnson bought shortly after he finished boot camp in the U.S. Marine Corps at Parris Island. It is now covered with signatures from his musical influences, friends and heroes, including Neil Young, Nelson, Haggard, Kris Kristofferson and many others.

Johnson served in the military for eight years. His 2002 self-produced debut, They Call Me Country, features two songs that mention his Marine Corps service. In 2006, Johnson released his major label debut, The Dollar (BNA Records), which was buoyed by the release of the title track as its single. The platinum-certified That Lonesome Song (Mercury Nashville Records, 2008) peaked at #28 on the Billboard U.S. Albums Chart and produced two singles including the Top 10 hit, "In Color," and "High Cost of Living." Johnson's most recent album of original songs, The Guitar Song (Mercury Nashville), was released in 2010 and peaked at #4 on the same Billboard chart.

In 2016, he worked with Michael McDonald, Warren Haynes, Don Was, Ivan Neville, Cyril Neville, John Medeski and others on The Last Waltz 40 Tour. On this tour, Johnson handled many of the lead vocals and, as guitarist, participated in some solo traded-offs with Haynes. Johnson has also recorded songs for several tribute projects, including those honoring ZZ Top, Johnny Cash, and Elmore James, amongst others.

On a cool but pleasant evening in early April, Johnson touched down at the sold-out Paramount in Huntington, NY. The mid-sized venue was filled with a multi-generational audience, ranging from the six year-old girl who came with her father (a ticket to the show was her birthday present) to fans well into their seventies. Johnson and his band were joined by singer/songwriters Kelsey Waldon and Chris Hennessee, who serves as Johnson's lead guitarist, releasing a number of solo albums of his own over the past decade or so, as the opening acts.

The evening began with Waldon's eye-opening set. The crowd, asking "who is she?" at the start of her performance, was cheering by the end of the singer/songwriter's short but powerful set. Highlights included "High In Heels," "Travelin' Down This Lonesome Road," "The Heartbreak" and "All By Myself."

The main event began at approximately 9:15pm. Johnson and his band opened with a fantastic version of "Keeping Up With the Jonesin,'" and then rolled into the gritty "High Cost of Living," a sobering account of the horrors of substance abuse, self destruction and recovery.

The night's performance was a marathon. If it was short on conversation, with Johnson barely speaking but taking a few requests, it was long on musicianship. Other highlights of the set included: "By The Seat of Your Pants, "Ray Ray's Juke Joint," "The Dollar," "In Color," "That Lonesome Song, and the witty "Cash My Checks," featuring the sly lyrics "You can take my word, but you can't cash my checks."

Johnson also shone on some very well-chosen covers, including a rockin' version of the Georgia Satellites' "Keep Your Hands To Yourself," a haunting look at Woody Guthrie's "This Land Is Your Land," a soulful version of The Band's "Ophelia, Little Feat's "Willin,'" a duet with Waldon on John Prine's "Paradise," Hank Williams' "I Saw the Light, and a groovin' version of "Tulsa Time," written by Don Williams but most notably covered by Eric Clapton.

For the show's closing tunes, Waldon and her group joined Johnson and his band. Together, they brought down the house and had everyone in attendance clapping, whistling, cheering and screaming for more.

The fans in the crowd—some standing for the entire show, completely in awe—spent the evening singing along, dancing to the music and using their phones to take pictures and videos. When the concert was over, many of them—including that same six year-old girl, who was clutching her new prized possession, a large poster of Johnson that was bigger than she was—were crowding the merchandise stand, where they treated themselves to T-shirts, hats, keychains, CDs, vinyl, hoodies and other items.