BY JAKOB BAEKGAARD
October 22, 2018
Sign in to view read count
Music is essentially a mystery. There are multiple ways of shaping sounds and just as many ways of perceiving them. Danish pianist and Associate Professor at Rhythmic Music Conservatory in Copenhagen, Jacob Anderskov, has examined the possibilities of music from a practical and scholarly point of view for a long time. His research is reflected by his records and his records are a way of documenting the process of musical exploration. The project Action VS. Reaction. New Music for Strings, Percussion and Piano resulted in the album Resonance (Stunt, 2016) while another project, Habitable Exomusics, became the foundation for an album trilogy released on ILK in 2015: Kinetics (the Path) , Statics (the Map) and Dynamics (the Terrain). A detailed analysis of the thoughts behind the project can be found here: http://jacobanderskov.dk/wp-content/uploads/2015/08/HAB_EXO-Analysis_pdf_150810.pdf

All this is to say that Anderskov is a musical thinker, but his music can also be enjoyed on a more intuitive level. Musical iconoclasts like Thelonious Monk, Steve Coleman, Henry Threadgill, Anthony Braxton and Jimmy Giuffre are able to combine complex musical thinking and swinging sounds and the same thing is the case with Anderskov who can easily move from abstract soundscapes to swinging rhythms. A proof of his diversity can be found on the records Mysteries and Out of the Spectacle. Both are trio records, but they are very different in their approach. 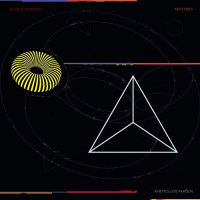 Mysteries rides in the slipstream of the Habitable Exomusics project. Anderskov plays with the trio he introduced on the record Kinetics (the Path) where he teamed up with bassist Adam Pultz Melbye and drummer Anders Vestergaard. A lot has happened since then and the trio has become a regular working band. Thus, the present album is a live recording from Köln at the end of a European tour.

The opening track "Brekkek kekkek" gives the impression of being Dadaistic babble, but is in fact a forceful lyrical tune bookended by Anderskov's crystalline ruminations. In-between Pultz Melbye sets up a deep groove and delivers a solo while Vestergaard swings lightly, but firmly. As a contrast to the soft beginning and ending, Anderskov attacks with orchestral waves of sound that threaten to sweep the rest of the trio away, but Pultz Melbye steers the ship away from the storm.

"Anchorman" is another study in dynamics with Anderskov's characteristic twists and changes in pace with lightly dancing figures. The final track, "Origami Megalith," explores the beauty of space with dwelling chords and the bass played with bow. It is an abstract lullaby that slowly moves into dissonant chaos before moving towards silence again. The keyword is contrasts. The trio constantly navigates in a musical space between the familiar and unfamiliar. Harmony borders on dissonance and dissonance turns into melody while the approach changes between featherlight sensitivity and a physical punch on the piano whose manifold colors and shades are brought into play. 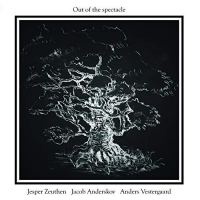 Out of the Spectacle is also a trio recording and only replaces one musician for another, but the effect is crucial. Instead of Adam Pultz Melbye's grooves, the album relies on the characteristic tone of saxophonist Jesper Zeuthen. Without the rhythmic momentum of the bass the album is searching in another way. The paths to musical mysteries are many and Anderskov is more subdued as he explores the strings on the piano and bursts out in rolling percussive attacks.

Zeuthen sings with a fragile tone like a human who learns a language for the first time. He also screams, but it is not the scream of free jazz and Albert Ayler that Zeuthen is sometimes compared with. Zeuthen's tone seems much brighter, but they have the sense of strong melody, emotional vibrato and the high-pitched cry in common.

The cover of Out of the Spectacle depicts a giant tree that could be Yggdrasil the world tree from Nordic mythology. These three musicians seem to dig at the roots of music, trying to find a language together that is both new and fresh and old and forgotten. The three parts of the record reflect a journey where songs are born out of chaos, or to put it another way: structures rise out of nothing. In that sense, the ending of part 3 is a fitting coda to the journey. Zeuthen's gently spiraling melodic lines unfold amid the repeated bell-like patterns of Anderskov's piano and Vestergaard's rustling, percussive beat. The mystery is the melody blooming in the roots of rhythm.

Out of the Spectacle