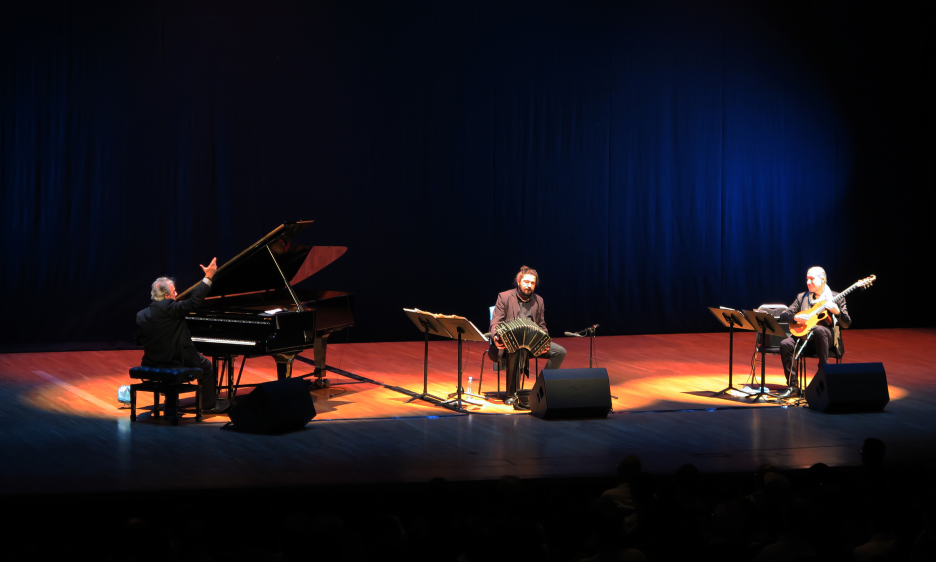 Piazzolla’s ball of contradictions veer sharply into focus–this is tango redefined; music of both day and night, of countryside and city, tightly ordered yet imbued with freewheeling improvisational energy–moving the body while stirring the mind.

There's a tightly wound ball of contradictions at the heart of Astor Piazzolla's "nuevo tango" revolution, which injected the common man's South American dance music with classical sophistication and jazz-influenced harmony, literally taking tango from the dancehalls to concert halls, elevating its association from brothels to academia.

The quest continues in the Argentinian composer's survivors, of which the most visible today may be Pablo Ziegler, the compatriot pianist who played with Piazzolla for more than a decade up to 1989 —a fact he is in no hurry to disguise, dropping the maestro's name just one piece into his Hong Kong performance, which itself featured no less than four Piazzolla compositions.

Which is a misleading statistic, because rather than dining out on the association, Ziegler seems determined to push the elevation of tango even further, his own work furrowing a deeper exploration of contemporary composition, film music, blues forms and—most notably —jazz. Last year's Best Latin Jazz Album Grammy Award—for the excellent Jazz Tango—seems not just a bulwark against late-career complacency, but tacit acknowledgment that the septuagenarian pianist is still leading the nuevo tango bandwagon today.

It was a different trio joining Ziegler on his European and Asia tour of fall 2018, with long-time collaborator Quique Sinesi on nylon string guitar and Walter Castro sitting centerstage, his bandoneon weaving into the music much of its rustic color (Ziegler rejoins the record's line-up of Claudio Ragazzi and Hector Del Curto for North American dates, beginning at New York's Joe's Pub, from November 8).

Such a combination of three polyphonic instruments—each able to play lead lines and chords alike—produces some gorgeous textures and unexpected harmonies, but taste and discretion is a necessary commodity. The sprawling pages of sheet music falling off Castro's music stand midway through the opening milonga are matched by an almost constant gaze held between the three musicians—with no percussion or grounding lower register, the sense of a precarious tightrope walk is never all that far away.

Maintaining this midrange equilibrium is thrilling to watch—melodies, solos, basslines, percussive flourishes and other extracurricular embellishments passed around the stage with a grace and restraint. A rustic lyricism underpins "Muchacha de Boedo" a nostalgically folkish, rainy day lament, while there's a touch of dirge to the blues homage "Blues Porteno." Inspired by playing hopscotch as a child, a frantic energy drives "La Rayuela," effortlessly evoking the childish bliss of jumping without direction or purpose. Built around a gloomy horror movie of a riff, "La Fundicion" brought out some of Sinesi's sprightliest phrasing, a player who when unchallenged too often slips into clichés.

It's never hard work, but Ziegler's self-penned repertoire is not without weight. The program's second half knowingly chases the pianist's restless quest with varying, but always admirable, results: The jagged riffing of "Desperate Dance"—title track of a 2015 duo release with Sinesi—unleashes the evening's most frenetic playing, while the same LP's "Mahavishnu Tango" compellingly recasts John McLaughlin's "Dance of Maya."

Like the album, the night was bookended by two of Piazzolla's best-loved tunes "Michelangelo 70," and a rapturously received encore of "Libertango." Unfolding at a breakneck pace, both gripping the players and grooving the audience, Piazzolla's ball of contradictions veer sharply into focus—this is tango redefined; music of both day and night, of countryside and city, tightly ordered yet imbued with freewheeling improvisational energy —moving the body while stirring the mind.