By Cyril Moshkow
October 7, 2009
Sign in to view read count
Crisis or no crisis, the 2008-2009 jazz concert season in Russia was far from being eventless. New fruitful collaborations were unveiled, new record labels were launched, old festivals have convincingly confirmed that they were well alive and kicking, and many good Russian jazz albums have hit the stores. Those albums revealed a new trend, that of many exciting Russian-American joint ventures in jazz this year. Of those intercontinental collaborations, pianist Ivan Farmakovsky's debut as a leader, Next To The Shadow (Boheme Music, 2009), proved to be one of the most intriguing Russian jazz releases of the year.

The album marked something of homecoming for Framakovsky, who spent a few years outside jazz field playing electronic keyboards in one of Russia's most popular rock bands, Mumiy Troll. Farmakovsky, born in Moscow in 1973 to a family of a professional musician and an actress, studied jazz as a child at the very first jazz education institution in Moscow, the former Moskvorechye Jazz Studio (currently Moscow College for Improvised Music). He continued his studies at the Moscow State Jazz College and, finally, at the Russian Academy of Music which has offered the country's best jazz curriculum over the past quarter century.

Farmakovsky won the 1994 bi-annual Russia Jazz Competition, the biggest contest for young performers in Russia; in 1997, a similar achievement at the Europe Jazz Contest in Belgium followed. From 1998 to 2001, Ivan played in the Igor Butman Quartet, led by Russia's most successful jazz saxophonist. Then there were the years when he worked with Mumiy Troll, and it was not until 2007 when Farmakovsky, finally disappointed by playing with rock musicians, decided to get back to his jazz roots entirely, and started to work on the material which later became Next To The Shadow.

"I have long dreamed about recording with the Americans," says Farmakovsky. " I have had many chances to play with visiting American jazz greats during many jazz festivals in Russia, and I have to admit that it extended my ensemble interaction skills a great deal. I have only once played with [drummer] Gene Jackson before—just a couple of tunes at a jam session; but I have listened to his records a lot, especially those made during his tenure in Herbie Hancock's band. Then trumpet player Alex Sipiagin, a Russian who lives in New York, brought Gene to Russia in 2005, and I attended their performance at Le Club in Moscow. In 2007, I heard Gene performing with Russian pianist Andrei Kondakov and New York-based Russian bassist Dmitry Kolesnik during the Hermitage Garden Jazz Festival in Moscow. And I knew that I wanted to record with Gene one day.

"In 2007, I recorded with Soviet jazz veteran Herman Lukianov for his In Black And White (One Records, 2008) album; however interesting musically, that record taught me a lesson—I knew immediately that I would never, ever, try to save money on the recording quality, on the sound engineering. Which left me no choice but to record in New York City. There's a couple of more or less well-equipped studios in Moscow, but, with all due respect to the people who work there, nobody in Moscow, just as yet, has the right technical, and especially aural, skills for recording acoustic jazz bands. 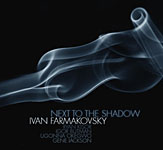 "When I found enough funding to finance the recording, I asked my old employer, [saxophonist] Igor Butman, to help me with the production. My English was very far from good, but it wasn't an interpreter I needed in Butman; the main thing was, Igor knew the American industry from inside, as he worked in the U.S. for nearly a decade. So Igor ended up being the "player/producer" on my album—I hoped he would be interested in playing the sax parts, and he was.

"Igor [Butman] recommended bassist Ugonna Okegwo; I was also interested in getting [trumpet player] Ryan Kisor—I have played with him in Russia before. Igor brought together all those musicians—Ryan, Ugonna, Gene, and us two Russians—and the great James Farber recorded this group at Sear Sound in New York. This is how I thought I would know a good recording from just a recording: I would hear, more or less, the same music that I heard inside my head when I composed the tunes for the album (all ten selections were my originals). But on this record, several moments sounded better than I could ever imagine. Just moments, of course; not many musicians can be completely content with their recordings, or they're insane.

"I saw this album as a means of growing a little bit, to raise the bar for myself by playing with those who played stronger than I [do]. It was particularly important for me, after years of playing with rock musicians. I cannot be completely objective towards my own work, but I think that, with this recording we made in New York City, I have achieved the goals I was hoping to achieve.

"Currently, I'm preparing the material for my second album. I plan it [to be] very different—different setting, first of all: it's going to be a piano trio recording. But different music, too. I have chosen a selection of Russian / Soviet song classics from the 1940s - 1970s which I want to turn into jazz tunes.

"Playing in a trio setting is different; I alone decide how to interpret the tune, not depending on the partner soloists. [For] many years I have played with my Moscow trio—bassist Anton Revniouk and drummers Alex Mashin or Serguei Ostroumov—so I have some experience in this setting. And I'm sure that this material—old Russian songs—deserves such interpretation—those tunes are full of beauty. Some of them were quite jazzy from the very beginning, because the Russian composers who wrote them were influenced by American jazz music. They did not quote jazz licks or Broadway harmonies directly, the way 1930s Soviet jazz and "variety music" pioneers did, but you feel that they knew that music.

"I want to record that music, plus a few more of my originals, with an American rhythm section. I'm not yet at the stage when I can say who my prospective partners are, but I'm approaching this stage, as I'm planning the recording session in New York City this November [2009].

"My originals, which constituted the first album, didn't need an explanation to my American partners; the music I write is well inside the straight-ahead 'modern creative' jazz idiom. I am sure that the old Russian songs I'm planning to record for my second album are in there as well. I'm trying to hit two goals with one shot: for future Russian listeners, this music will appeal because they will know the original songs, and (hopefully) love my interpretations; for the worldwide audience, I'm just presenting some beautiful music. They may not be aware of its roots and origin, but I am sure they may be touched by the beauty of those Soviet songs."

Ivan Farmakovsky, Next To The Shadow (Boheme Music, 2009)

Herman Lukianov, In Black And White (One Records, 2008)