It's an Upstate Thing: John Medeski and Lee Shaw; Joe Barna and Sketches Of Influence

By J Hunter
March 6, 2011
Sign in to view read count
It's time once again to prove that all the great jazz in New York State isn't all made in New York City. The state capital of Albany has been doing its part for quite some time, and it doesn't stop with its two favorite musical sons: mallets wizard Stefon Harris and baritone saxman Nick Brignola. Here are the latest offerings from the Capital Region, both of them recorded live—one from an inspiring octogenarian pianist and the pupil who made it big, and another from a young lion who is more than ready to show the world what he's got. 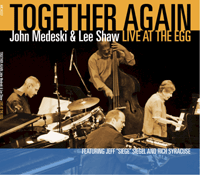 Together Again: Live At The Egg

Pianist Lee Shaw has been working the ivories for over five decades—and, more often than not, she was teaching when she wasn't playing. That's the way it was when she lived in Fort Lauderdale, Florida in the 1970s, where one of her students was a classically-trained 13-year old named John Medeski. The rest (with a little help from drummer Billy Martin and bassist Chris Wood) is some pretty righteous music, but Medeski and Shaw never lost track of each other. And in 2009, teacher and student met up at Albany's Center for the Performing Arts (aka The Egg) to make some pretty righteous music of their own.

In a pre-concert interview, Medeski said the "single, best lesson" he got from Shaw was to "play freely (the first thing) after I warmed up," so that's the first thing Medeski, Shaw and her regular rhythm section do. "Lizards" is credited to Medeski, but it's a group improvisation inspired by the small lizards that seem to inhabit every patio in the state of Florida. Medeski and Shaw's call-and-answer jumps back and forth while bassist Rich Syracuse adds texture with his bowing. Drummer Jeff Siegel's scuttling work on cymbals and shells completes the frenetic mental picture. The exercise darts to and fro with a dark tone easily associated with lizards (or movies about lizards like Godzilla, anyway), and the keyboardists' listening skills make the overall construction even better.

Medeski and Shaw move on to explore each other's songbooks, and delightful expansion is the order of the day. Medeski's melodica on "Prairie Child" adds a wonderful whimsy to Shaw's ode to her Oklahoma childhood, and brooding Hammond B3 brings a funereal tone to "Tears," a wrenching piece Shaw wrote for her late husband/drummer Stan Shaw. Medeski's organ doesn't stay brooding, though, as it adds swirl to Shaw's intricate "Blues 11." Since the evening is based on history, Medeski reaches back 16 years for two pieces from Medeski Martin & Wood's breakout disc It's A Jungle In Here (Gramavision, 1993): a stripped-out "Where's Sly?" appears at the end of a solo-piano piece that lets Medeski showcase his classical base, and then Medeski lets Shaw take the piano on "Wiggly's Way" while he stays with the Hammond, and the result is juicy indeed.

The coolest thing about Together Again is not that Medeski is paying tribute to the teacher who got him started (although he most certainly is); rather, it's that Medeski and Shaw meet, and play, as peers, each respectful of the other's talents and both dedicated to giving the audience the best performance possible. The solid performances on Together Again may be no surprise for Medeski's fans, but hopefully they'll discover the vibrance and joy Shaw brings to everything she does, including this great night where past met present and had a really good time.

Visit Lee Shaw on the web. 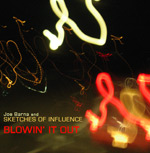 Joe Barna and Sketches Of Influence

Watching drummer Joe Barna's development has been pure pleasure for everyone who's followed him. Only a few years ago, Barna could have handed out business cards embossed with the slogan, "This kit goes to 11!" But his rocket-like growth curve has left those days far behind, as witnessed by Barna's superb live disc, Blowin' It Out.

Recorded live at the late, lamented Bread & Jam Café in Cohoes, New York, Barna collected a heady mix of local heroes and New York heavies to make the kind of energetic trad jazz that needs to be played: the kind that gives the past a grateful nod, but not an over-reverential bow. It's also music Barna composed with individuals "of influence" in mind—from local icon Lee Shaw to Hall of Fame pianist McCoy Tyner. The up-tempo opener "Sudden Lee" is dedicated to second-generation sax star Lee Russo, and the front line of reedman Jon Gordon and horn player Joe Magnarelli hit this hard-bopper like the Packers hit Ben Roethlisberger. The crowd only gets a short taste of the devastating harmony the two Vanguard Jazz Orchestra alums are capable of before Gordon steps out and sears the place with his alto.

It sounds wrong to call Gordon economical, because the content just comes in waves and rarely stops. But it isn't wrong, because it's all substance with no filler; not a note is wasted or out-of-place, whether it's on flag-wavers like "Lee" and "Brother Steve," or on the elegant ballad "Ivory Romance." Gordon plays soprano sax on the latter tune, and the result proves Gordon is one of today's best on that instrument. While Gordon is the diver and the dancer, Magnarelli is the big hammer. It's not that he lacks moves of his own—far from it. But it's his muscle car quality power that makes his pairing with Gordon so choice. Magnarelli even takes the usually more subtle flugelhorn and makes it a weapon of marvelous destruction on the sexy bossa "Teardrops from Home" and the waltz-cum-blues "It Has Only Been A Day."

Anyone familiar with bassist "Captain Lou" Smaldone won't be surprised with the wide, fat foundation he effortlessly lays, or with his substantive solo on the bluesy "Time For Tyner." The big surprise comes from pianist Dave Solazzo. The Syracuse native's stock-in-trade has been a Bill Evans-quality lyricism, which Solazzo amply displays during his in-the-clear solo on "Ivory." But his unexpectedly funky aggression on "Tyner" is worthy of the piece's namesake, and his best moments on Blowin' It Out happen when he surrounds the front line's melodies with grinning, impudent fills. Barna's always a great drummer, but on this date he's a great leader, focusing most of his energy setting up his band mates to score big; the closest he gets to a solo is trading ripping fours and eights with the front line.

Life is all about choices. Joe Barna chose to put his music ahead of himself. It was a wise decision that showed maturity and discipline. And Blowin' It Out is only the beginning.

Visit Joe Barna and Sketches of Influence on the web.

Together Again: Live At The Egg

Tracks: Sudden Lee; Time For Tyner; Teardrops From Home; Brother Steve; It's Only Been A Day; Ivory Romance; Blow It Out.