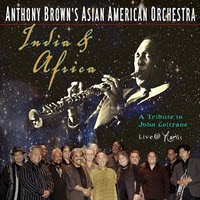 India & Africa offers a surprisingly accessible performance tribute to some of saxophonist John Coltrane's most knotty and deeply spiritual music, a tribute wondrously heavy on drums and percussion, beginning with orchestra leader Anthony Brown. Taken into standalone context like this, Coltrane's exploratory jazz probes into the music of India and Africa—including "India," "Africa," "Liberia" and "Afro Blue"—construct an impressive chapter in the saxophonist's considerable body of work.

"Although Coltrane was influenced by music globally when he recorded 'India' and 'Africa,' he did not incorporate instruments from those cultures," Brown explains. "The Asian American Orchestra has extrapolated Coltrane's original vision by including Indian and African traditional instruments into these masterworks."

Passage to India begins from a reflective "Living Space," an opening drone with flutes and other wind instruments that seem to float in....umm, living space, and points the direction for the orchestra's journey to follow. "India" moves powerfully and slowly, like a continent. The pace quickens in the indigenous duet between tabla (Dana Pandy) and sarod (Steve Oda), which alternates unison with call and response passages; the stereo separation in these response passages, when their riffing bounces back and forth between your speakers or headphones, is extremely cool. When saxophonist Masura Koga leads the ensemble back in to reprise "India," the ensemble (and appreciative audience) erupts into audible joy—the genuine spiritual connection of collective creation.

Bridging these two continents, "Exaltation" begins as an African chant with matching percussion. But the chant turns, when landing upon the word "grace," into a rough-hewn version of the Christian traditional "Amazing Grace." This opens up passage to "Africa," where Koga blows impressive tenor fire to honor history's most famous saxophone flamethrower. "Africa" leads to "Liberia," where pianist Glen Pearson anchors saxophonist Melicio Magdaluyo's exploratory, explosive tenor, while the orchestra's percussion lines multiply like chattering rabbits all around them. "Liberia" maps out this journey's most Coltrane-like jazz stop.

Brown has previously honored the works of Duke Ellington, Thelonious Monk, George Gershwin and Charles Mingus with his orchestra, and collaborated with drummer Max Roach, pianist Cecil Taylor, pianist Anthony Davis and other jazz giants. In the 1990s, Brown served as Curator of American Musical Culture for the Smithsonian Institution.