Percussionist, composer, ethnomusicologist, educator and Smithsonian Associate Scholar Dr. Anthony Brown is a seminal figure in the contemporary California creative music scene, directing the Asian American Orchestra in addition to performing with some of the foremost musicians in jazz today.

The late jazz saxophonist and MacArthur Fellow Steve Lacy joined as guest artist for the Orchestra's next recording, Monk's Moods. Rated as a “five-star masterpiece” and one of four “Best CDs of 2003” by Downbeat magazine, the recording features new interpretations of Thelonious Monk's compositions in collaboration with Monk's original producer, Orrin Keepnews. Dr. Brown can also be heard on over twenty other recordings on Water Baby, Asian Improv, Soul Note, Blue Note, Gramavision, and Hat Art Records.

Anthony Brown's musical career, spanning performance, composition, and education, dates back to the 1970's. A San Francisco native of Japanese and African/Native American descent who grew up around the world as an “Army brat,” Dr. Brown has developed a unique compositional and performance voice reflective of his own intercultural heritage and experiences. His work in the early 1980's with the pioneering San Francisco-based jazz quartet, United Front, sparked an interest in blending non-Western compositional approaches and instruments with traditional jazz idioms and improvisation that he is still exploring today.

Jazz critic Neil Tesser wrote, “When it comes to integrating Asian musical traditions with jazz, no one has better credentials than percussionist and composer Anthony Brown. Brown even seems to have been born to the task ...” He grew up in California, Japan and Germany, writing Bach fugues in high school while penning his first blues compositions. His father was a thirty-five year career Army Sergeant Major of African/Choctaw heritage from South Carolina, and his mother is a native of Tokyo, Japan. While living in Japan as a preteen, Brown developed an interest in visual arts, and then began emulating his brother Michael, an electric guitarist and bassist who later toured with Bo Diddley. After returning stateside to Los Angeles in 1966, Brown switched to drums and began playing in Jimi Hendrix/Sly Stone-influenced bands with then-bassist/vocalist James Newton. They experimented with jazz in high school before Brown moved to Frankfurt, Germany in 1970, where he studied music theory and flute while playing in R&B/progressive rock dance bands.

In 1983, Brown received a commission from the San Francisco Chamber Music Society to compose Incantation Suite, an extended work for jazz quartet and string trio. A twenty-minute suite in five movements, Incantation Suite is prototypically Fifth Stream in its varied conceptual approaches, structural details and instrumental influences from Asia and Africa. In 1984, Brown appeared as a guest artist with the San Francisco Symphony in performance of Anthony Davis' Wayang V, and the next year in his opera, X-The Life and Times of Malcolm X at the American Music Theatre Festival in Philadelphia.

In 1985, Brown moved to New York, worked with Newton and Anthony Davis, Sirone, Mark Helias, Tim Berne, and others in the nascent downtown scene. He also earned a Masters of Music degree at Rutgers University in jazz performance, studying with Ed Blackwell, Kenny Barron, and later with Max Roach and Dr. Billy Taylor. Brown was awarded a Ford Foundation Fellowship to earn his doctorate and chose to complete a Ph.D. in music at UC Berkeley, specializing in ethnomusicology to research the musics of his cultural heritage. Afterwards, he began four years of bi-weekly commutes to Washington, DC as Curator of American Musical Culture and Director of the Jazz Oral History Program at the Smithsonian Institution. Successive commissions from the Asian Heritage Council and the Rockefeller Foundation in 1995-96 cemented Brown's pursuit of a career as a composer in addition to a performer and independent scholar.

In addition to composing the music for the critically acclaimed short documentary, Witness to Hiroshima (2008), Dr. Brown and his music are featured in the film documentaries, Doubles: Japan and America's Intercultural Children (1995), and Outside In Sight: the Music of United Front (1986). He also composed the original theatrical scores for the American Conservatory Theater’s 2007 premiere of Philip Gotanda’s After The War, and TheatreWorks’ 2003 premiere of The Legacy Codes. His composition, “Rhymes For Children,” served as the theme music for Pacific Time, a PRI syndicated weekly newsmagazine heard internationally from 2001-07.

In 1997, the Asian American Jazz Orchestra was founded under Brown's artistic direction for a federally-funded national educational touring project about the Japanese American internment experience of World War II. After the project ended in 1998, Brown expanded the group and renamed it Anthony Brown's Asian American Orchestra, in keeping with the traditions of King Oliver's Creole Jazz Band, and Machito and his Afro Cubans. The Orchestra has been featured at the Monterey, San Francisco and Chicago Jazz Festivals, the San Francisco Asian American Jazz Festival, the Earshot Festival, the Smithsonian Institution, and numerous universities and concert halls nationally.

Anthony Brown has received grants, fellowships, awards and commissions from, among others, Lila Wallace-Reader's Digest Fund, Meet the Composer, National Endowment for the Arts, California Arts Council, TheatreWorks, and the MacDowell Colony. He has presented master classes, lectures and scholarly papers at the National Academy of Sciences, Smithsonian Institution, Library of Congress, Columbia University, the Franz Schubert Conservatory (Vienna, Austria), and at every campus of the University of California. Dr. Brown has articles in The New Grove Encyclopedia of Music and The Encyclopedia of African American Culture and History published with Simon & Schuster Macmillan. His book, Give the Drummer Some! The Development of Modern Jazz Drumming, is forthcoming from the University of California Press. Show less

Miraflores’ Miget to Tour with Dr. Anthony Brown and the Asian...

Miraflores' Miget to Tour with Dr. Anthony Brown and the Asian American...

Miraflores Music Miget to Perform with Dr. Anthony Brown and the Asian...

”If music is a language, then Berkeley percussionist and composer Anthony Brown is probably one of the most articulate men in jazz.” —The San Francisco Chronicle

“...and Mr. Brown, swinging away on drums, made the piece levitate.” —The New York Times 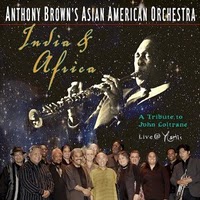 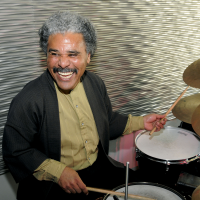 All About Jazz musician pages are maintained by musicians, publicists and trusted members like you. Interested? Tell us why you would like to improve the Anthony Brown musician page.