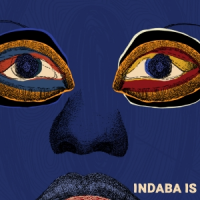 There are probably several reasons why American jazz made the deep and lasting impact it did on South Africa in the 1950s. One may be that the colonial regime which was imposed on the country during Europe's pan-African nineteenth-century landgrab was among the most vicious of them all, and persisted the longest through the apartheid system which was in existence until the early 1990s. American jazz was born as protest and cultural-survival music in similar circumstances, and that vibe must have struck a chord in South Africa when jazz records began to be introduced to the country by visiting merchant seamen. (The Belgian Congo rivalled colonial South Africa for organised brutality, so it may be significant that T.P.O.K. Jazz and many other leading Congolese bands which emerged in the 1950s used the word Jazz in their names, even when they were in fact interpreters of Afro-Cuban music).

Anyway, South African jazz began its return journey to Europe in 1961, when the show King Kong: All African Jazz Opera—which launched the careers of trumpeter Hugh Masekela and saxophonists Gwigwi Mrwebi and Caiphus Semenya among others—played a season in London's West End and then toured regional British theatres (see YouTube below for a taste). Several cast members jumped ship rather than return to South Africa and were given permission to stay in Britain. A second wave of defectors followed in mid decade, most famously including The Blue Notes band: pianist Chris McGregor, alto saxophonist Dudu Pukwana, trumpeter Mongezi Feza, bassist Johnny Dyani and drummer Louis Moholo-Moholo.

Back in South Africa, jazz has since the 1960s gone from strength to strength and the scene in 2021 is by all accounts healthier than ever. Which brings us to London label Brownswood's various artists' compilation of South African jazz, Indaba Is.

In 2016, Brownswood released a landmark of modern South African jazz with reed player Shabaka Hutchings' first collaboration with Johannesburg's Shabaka & the Ancestors , Wisdom Of Elders The label also has a knack of catching the wave with intelligently curated snapshots of emergent scenes, most notably of London's underground jazz scene on the various artists' compilation We Out Here (2018), a specially recorded collection of material for which Hutchings acted as musical director.

The Ancestors have a track on Indaba Is, another specially recorded album for which South African pianist and songwriter Thandi Ntuli and The Ancestors' singer and lyricist Siyabonga Mthembu acted as creative directors. Ntuli has a track on the album and she and Mthembu feature on another by The Brother Moves On. The album was recorded over five days in summer 2020 at a studio just outside Johannesburg.

Much like the new London jazz scene, the new South African scene is concerned with heritage and identity. In London the music reflects the Caribbean and West African backgrounds of many of its players. In South Africa the music references apartheid and immediate post-apartheid styles such as township jazz, kwela and kwaito. Indaba Is reflects this. Like Shabaka Hutchings and The Ancestors' 2020 album, We Are Sent Here By History (Impulse!), it is a thoughtful examination of the several routes along which modern South African jazz has arrived and a thought-provoking pointer towards where it may be going. It is, also, a lot of fun.