Home » Jazz Articles » Yelena Eckemoff: In The Shadow Of A Cloud

Yelena Eckemoff: In The Shadow Of A Cloud 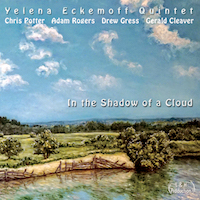 She may rarely perform live in this context, but Yelena Eckemoff has managed to build, over just seven years and a mammoth eleven releases—including her second release of 2017, In the Shadow of a Cloud—a loyal and growing following in the jazz world. It's all the more remarkable for a multi-talented expat Russian pianist who began life in the classical world, and only entered the jazz world in 2010 with Cold Sun.

But there's even more to marvel at when it comes to Eckemoff, who relocated to the USA a little over a quarter century ago. Consider her accomplishments over the past seven years: she has released the entire body of jazz work on her own L&H Productions imprint, with only the help of publicists to help get the word out; has produced all of her recordings; and, since 2014's A Touch of Radiance, also contributed original paintings, as well as corresponding poetry to each composition. Few musicians could be compared to film auteurs who write, produce and direct their films, but it's clear that the term fits Eckemoff to a "T."

That said, looking at the large and diverse list of illustrious names with whom Eckemoff has collaborated on her recordings—including Norwegians Arild Andersen, Jon Christensen, Mats Eilertsen and Tore Brunborg; and Americans like Peter Erskine, Billy Hart, Mark Turner, Darek Oleszkiewicz and George Mraz (two more expats), Joe Locke, Mark Feldman and Ben Street—might suggest, to the more cynical-minded, a lesser-known artist with the funds to hire "ringers"—name players who would give her recordings additional cachet.

But they would be wrong. Speak with most (if not all) of the musicians with whom Eckemoff has worked—and that includes the all-Finn group of Blooming Tall Phlox, released earlier this year and which features a couple of names known to ECM and ACT fans (drummer Olavi Louhivouri and trumpeter Verneri Pohjola, respectively), along with two other up-and-comers on the Finnish scene—and there seems to be a universal response: that Eckemoff is the real deal; a virtuosic pianist who has also evolved into a composer of significance. Andersen, in fact, has commented on the depth and challenge of her writing—two descriptors that are both high praise and, for many musicians, precisely what they look for when hired for a session.

It's also easy to tell when name artists have been hired as ringers; their performances are never less than impeccable, but they rarely demonstrate the kind of sparks that occur when they're truly enjoying themselves. Based on past albums—though one need look no further than In the Shadow of a Cloud, where Eckemoff has surrounded herself with the all-star dream team of reed/woodwind multi-instrumentalist Chris Potter, guitarist Adam Rogers, bassist Drew Gress and drummer Gerald Cleaver—it's clear that everyone has been nothing less than fully committed, completely engaged and utterly in-synch with the pianist and her compositions.

But there are still more praises to heap upon Eckemoff. While she has produced her recordings, she clearly appreciates the value of releasing albums where the sonics do justice to the music, collaborating with A-list engineers including Rich Breen, James Farbey and Jan Erik Kongshaug, who have been responsible, at various points, for recording, mixing and mastering her releases. While it would be incorrect to suggest that her recordings sound precisely like those produced by ECM Records, it is true that, in their own way, they approach the heralded Munich label's attention to sound and, most importantly, detail and clarity.

Like Blooming Tall Phlox, In the Shadow of a Cloud is another double-disc set, this time featuring fourteen Eckemoff originals. And if Blooming Tall Phlox was a significant step forward for Eckemoff, whose lyrical and self-avowed romantic predispositions were all the more vividly contrasted by its more angular tone poems and some of the freest playing in her discography, In the Shadow of a Cloud takes its predecessor's advances and pushes them even further ahead, in no small part thanks to the intrinsic chemistry the pianist achieved by bringing together a quartet of additional musicians who may be playing with her for the first time, but have a couple of decades of experience working in various permutations and combinations (though never in precisely this grouping).

Just listening to the first disc's opening title track—how it moves from Potter's spare delivery of Eckemoff's gentle melody, at first accompanied only by Cleaver but with Gress, Eckemoff and Rogers (who briefly reiterates the same melody) quickly joining in—it's not long before the pianist's ability to create complex contrapuntal charts that nevertheless feel unhurried and filled with air is rendered crystal clear...as is the effortless empathy shared not just by her bandmates, but with Eckemoff as well. And while she has often left improvisation more decidedly to her musical partners, both her interpretive skills and a brief first solo suggest a growing comfort level in extemporaneous environs. The piece moves seamlessly between sections—some, full group; others, with smaller subsets—lending it the feeling of being much longer than its seven-minute duration. And with its brief dissolution into near-complete freedom, it's as if "In the Shadow of a Cloud" is an ideal primer, not just to the album but to Eckemoff's overall approach.

Except that, as rich, finely detailed and open-ended as In the Shadow of a Cloud's title track is, it's far from all there is to Eckemoff and, in particular, her growing compositional acumen. There's no denying that her classical background has something to do with the way she often builds her compositions episodically, as if they were miniature suites; but, while the more common American jazz tradition is largely (but not entirely) absent, Eckemoff manages to build bridges and dissolve (mis)perceived differences between what some consider to be jazz of American and European varieties. The truth is that whatever dividing lines some might like to erect between music from various locales, what Eckemoff has done, with a discography that moves seamlessly between American and European groupings—but has also brought musicians from both sides of the Atlantic together, as she did with 2015's The Lions and 2013's Glass Song—is to demonstrate that such delineations are, indeed, nothing more than artifice.

For so many jazz musicians in particular, naming compositions is often an afterthought...a task sometimes even left to others. But with Eckemoff's poetry the perfect complement to her music, she has also manages to accomplish a rare feat in creating music that reflects her own inspirations while, at the same time, providing plenty of opportunity for personal interpretation. With Potter's flute work floating over Eckemoff's delicate accompaniment, Cleaver's gossamer cymbal work and a contrasting line doubled by Rogers and Gress, there's an unmistakable sense of flow that evokes the image of "Waters of Tsna River," even if but a few have actually visited this waterway that was particularly significant in medieval Russia, as a connection between the Baltic Sea and Caspian Sea basins via the Tvertsa River. Just as rivers are unpredictable, so, too, are the performances here, in particular Potter, Rogers and, indeed, Eckemoff, all of whom seem to move back and forth from background to foreground, sometimes alone, but elsewhere interacting with each other, firmly supported throughout by Gress and Cleaver's understated but still muscular undercurrent.

With a group this strong, Eckemoff is able to deliver her strongest set of compositions yet. "Acorn Figurines" may initially seem thematically knotty, but remains an elegant ballad with a hint of melancholy...and, ultimately, a serpentine yet singable melody that may take a few spins to fully absorb. The deception is that Eckemoff rarely (if ever) writes anything that resembles a simple sketch or head-solo-head construct; and yet, as challenging as her charts become under scrutiny, while simply listening and allowing the music to flow, In the Shadow of a Cloud is an album that's as appealing on a purely emotional level as it is intellectually compelling.

Still, if any of this suggests music that lacks fire and is, instead, more soothing in complexion, the bright-tempo'd "On the Motorboat" not only demonstrates Eckemoff's greater breadth but takes advantage of the more fiery reputation of Potter, who turns in a relatively brief but characteristically potent and keenly focused tenor saxophone solo, followed by Eckemoff, whose spontaneity matches both that of her immediate predecessor and that of Rogers, who follows with a similarly vibrant turn that rapidly ascends and cascades with inimitable fluidity. A seemingly free middle section allows Cleaver some time in the spotlight while, at the same time, bolstered by contributions from Eckemoff and Rogers, before Gress rejoins and, with Cleaver back to defining a firm yet pliant pulse, leads to a finale where Potter and Rogers are both afforded, once again, brief but even more incendiary solo spots, before Eckemoff once again takes the lead to bring "On the Motorboat" to a close.

Furthermore, if there's any suggestion that In the Shadow of a Cloud lacks swing, one listen to the second disc opener, "Picnic in the Oaks," is all that's necessary to lay waste to that claim, as Eckemoff delivers one of her most "in the tradition" tracks ever. Still, it fits perfectly within the pianist's overall complexion and conception, even if her solo possesses, in addition to her extant musical background, just a hint of Thelonious Monk's characteristic idiosyncrasies. Elsewhere, "Vision of a Hunt" suggests how Pat Metheny might sound, were he of Slavic rather than American Midwestern lineage. Potter's bass clarinet is a rare treat, both as the composition's primary melodic instrument and in a solo that fits the composition's fervent vibe and Eastern European character.

Throughout the entire album, Potter, Rogers, Gress and Cleaver play as if they've been with Eckemoff for years. And the existing chemistry shared between them drives Eckemoff to heights she has rarely before reached. Fans of her prior recordings will still find plenty to love. Still, at the same time, just as Eckemoff is challenged, with each and every recording, to raise her game and broaden her purview, so, too, will fans of the pianist/composer find themselves opening up to the greater possibilities, the more unequivocal spontaneity and unexpected fire of In the Shadow of a Cloud...Eckemoff's most eminently impressive release to date.

CD 1: In the Shadow of a Cloud; Saratovsky Bride; Fishing Village; Waters of Tsna River; Acorn Figurines; On the Motorboat; Hammock Stories. CD 2: Picnic in the Oaks; Waltz of the Yellow Petals; Trail Along the River; Lament; Vision of a Hunt; The Fog; Tambov Streets on a Summer Night.