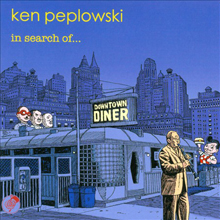 Ken Peplowski is a clarinet virtuoso, with a tone of such warmth and beauty that it takes only a few bars to create a feel-good atmosphere, either in performance or, as he ably demonstrates on In Search Of ..., in the studio. Although Peplowski has over 20 albums to his name as leader, he's still experimenting, still trying out new ideas—still, presumably, in search of something.

The first nine tunes are recordings from a February 2010 quartet session. Peplowski makes some terrific choices for this set, from Robert Wells and Jack Segal's beautiful ballad "When Joanna Loved Me" to pianist Shelly Berg's lovely "In Flower" and his infectiously swinging tribute to the clarinetist, "Peps." Peplowski is a veteran of the Tommy Dorsey band and Benny Goodman's post-retirement ensemble. He's also been influenced strongly by bop saxophonist Sonny Stitt. With such diverse influences Peplowski can move effortlessly between styles. He's an especially effective ballad player, something he does with aplomb on Rodgers and Hart's "A Ship Without A Sail" and Cy Coleman's "With Every Breath I Take."

The final three numbers find Peplowski in a slightly more adventurous mood, at a 2007 session originally intended to record material for a self-produced album. On "No Regrets" Peplowski duets on tenor sax with bassist Greg Cohen: both musicians swing and glide through the tune, Cohen's fluid bass playing creating a rock steady rhythm that allows Peplowski freedom to weave some snaking lead lines.

"Within You And Without You" is a reworking, and slight re-titling, of George Harrison's "Within You, Without You" from The Beatles' Sgt Pepper's Lonely Hearts Club Band (Parlophone, 1967). Peplowski and Cohen are joined by percussionist Joe Ascione and vibraphonist Chuck Redd, for a fascinating treatment of this pop classic. Percussion, vibes and bass create a floating wash of sound over which Peplowski's clarinet swoops in seductive, almost free-form, patterns. Lionel Belasco and Lord Invader's calypso, "Rum and Coca Cola," is another duet, this time with Ascione joining Peplowski. The clarinetist is, again, in terrific form, but he's matched by Ascione's amazingly vibrant drumming on a tune that is a delight from the first beat.

Peplowski's sleeve notes give some insight into the making of this album, but no clue as to what he might be In Search Of .... Bill Griffith's lovely artwork just adds to the enigma. But little mysteries make life that bit more enjoyable. So, too, does this music.