By KARL ACKERMANN
December 6, 2020
Sign in to view read count 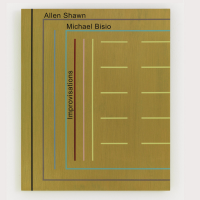 Classical pianist and composer Allen Shawn is not a familiar name in the jazz world. He comes from a well-known artistic family, the son of long-time The New Yorker editor William Shawn, and brother of actor and playwright Wallace Shawn. Allen Shawn received degrees from Harvard and Columbia Universities and teaches at Bennington College in Vermont. In that academic setting, Shawn would come to know fellow teacher and bassist Michael Bisio. Their duo project, Improvisations, is an unusual undertaking for both musicians and came about in a circuitous manner.

A virtuoso musician and improviser, Bisio is probably best known for his extensive work with Matthew Shipp, including the pianist's working trio with drummer Newman Taylor Baker. He has worked with Ivo Perelman, Whit Dickey, Bob Gluck, Brian Groder, Joe McPhee, Charles Gayle and many other top-tier artists. Bisio leads a trio with cornetist Kirk Knuffke and cellist Fred Lonberg-Holm.

Upon hearing Shawn's piano improvising at Bennington, Bisio suggested a duo project, but the pianist felt that the music would be outside his lane. But listen to Shawn's Five Piano Sonatas (Albany Records, 2018), and the dissonance and improvisational feel of some original etudes tell another story. The pianist reconsidered in 2019, and the duo went into the studio unencumbered by conventional trappings; the improvisations substitute track length for song titles, and there was no preconceived formula. The eight pieces on Improvisations were created in real-time, and they prove Bisio's instincts correct.

The densely layered "10:54" incorporates a history of the genre, with touches of early jazz, abstract passages, and cinematic drama, set off by near silences. They artfully lower the temperature before taking off with a new idea. The dark, brooding "5:07" finds Shawn and Bisio playing closer to their respective sweet spots; neither dismissive of the other or overly acquiescent, they approach improvisational perfection. The joyful, often jumpy "6:25" concludes the album with the duo closing in distinct but balanced spaces familiar to both musicians.

Given Shawn's initial hesitancy, the net result on Improvisations is all the more impressive. Neither musician makes overt moves driven by the need to acknowledge a counter-genre. The creative aim is far from predictable, but it is less an unequivocal challenge than an absorbing meeting of minds as it unfolds. Shawn and Bisio feed off each other's nature, producing personal music by turns complex, evocative, ominous, and calming. Highly recommended.