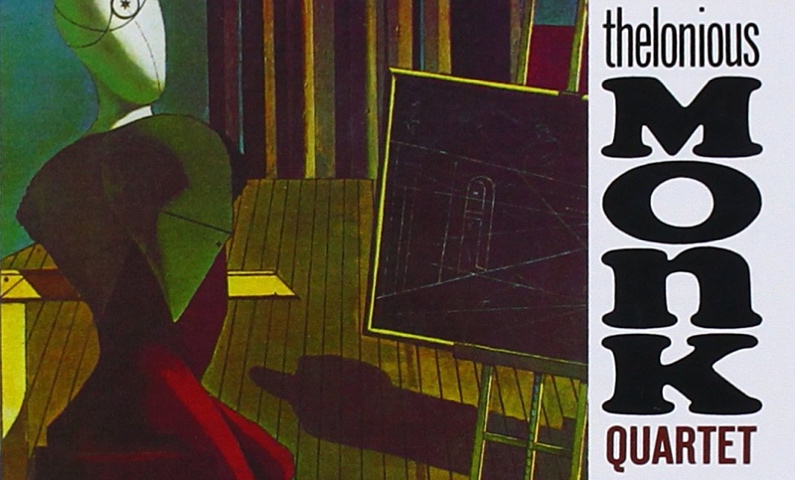 By ANNETTE JOHNSON
August 3, 2017
Sign in to view read count
Music and improvisation—that comes naturally to our ears but what if we say life and improvisation? Huh? Well, life is improvisation is it not? How do we deal best with that period of time between birth and death that we call life? Life is a strange dance partner—it offers one fun, friends, food, love, knowledge, discovery but lets you know throughout that death is part of this deal called life. Does improvisation sound more inviting now?

These are the questions that occurred to me as I wrote this article—a fitting tribute in Monk's centenary year. But Misterioso is also about the mystery of life and I am sure Monk could have called the piece Mystery but something in the Italian, Spanish, Portuguese, take your pick, Misterioso better framed the mood of the tune—the word is onomatopoeic.

Naturally, I listened to the album—Misterioso and the cover bears the painting called The Seer by Giorgio de Chirico. The Quartet were Ahmed Abdul-Malik on bass, Monk on piano, Johnny Griffin on tenor saxophone and Roy Haynes on drums, mostly recorded at the Five Spot Blues Café in New York, one of Monk's first gigs after having his cabaret card and right to work restored.

I looked at the eight tunes on the album I accessed and saw that the tracks told the story of the 2016 campaign -"Nutty," "Blues Five Spot," "Lets Cool One," "In Walked Bud," "Just a Gigolo," "Misterioso," "Round Midnight," "Evidence."

As I listened I thought of the parade of sixteen, where the melody Monk makes on piano is catchy, nearly retro swing feel to that melody, clear and easy to get. But the Griffin solo was the stand out and after following Monk's melody for a while, he then set himself apart, his solo stood out for its lengthy domineering nature, one felt at times that he crowed, but he had some sweet parts where his quick sax notes mesmerized. By the end of the tune, I had forgot all about the criticism made of Griffin at the time—that he was out of place, didn't belong, but he took over the whole number!

What an opening! The melody is a spectacle with a retro swing feel, back to the 1930s, catchy, memorable, a perfect one liner! Griffin's sax solo is confident, the notes insistent, a couple of warbles of notes, a high and then he gives everyone's ears a lyrical tune. Thankfully maybe, our ears wondering if Griffin blew what we thought he blew, up comes Monk, back in on piano with a slower melody, just as catchy until he comes up to speed and we get that melody of the one liner again. Monk expounds euphony, same melody, a bit of diddling around with it, high notes, all ways, the same theme. Reticent, Abdul-Malik comes in on bass in lowered tones, this is not the time to shine so he kept the bass solo short and sweet. Haynes drummed a burst of energy and I could hear 'lock her up, lock her up" for a couple strikes of the drums before it went on to shake things up a bit until the band joins in with that melody again—In walked Bud!

This tune was to me sobriety personified despite the name. While ad hominem jokes on Saturday night TV made fun of it all, this tune tells us that, suddenly, some people could see that this was not funny anymore, not funny at all. The ballots bear the names of the unlikely and many feared the unthinkable could occur and suddenly wanted to get sober. Voting is serious business and democracy is no joke!

The title track of the album fulfils all its onomatopoeic promise. Monk takes us with this tune on a stroll through a labyrinth, to some it feels like a long winding staircase with no landing, to others it feels like a stairway leading to the drama of the anticipated results. Monk is committed to that mysterious melody, the tension builds, and up and up and up one goes, and one hears a pause and hopes a vista will come into view, but no, up and up the stairs this mysterious melody goes. We hoped to see the land promised by this mesmerizing melody, up and up the stairs but the view is not clear, the melody strolls on and at the end of the tune, we have no answer and must wait.

Monk's piano introduction portends the unexpected, ladies and gentlemen, viewers, in those sharp piano notes one hears you are watching...well, well, and a moody Griffin solo takes over, eloquent in sadness, just wondering what might have been or if it's just not clear yet, things will turn right. "We never knew, we never knew and we just never saw we never knew." "What ever really happened here? We never knew just ne-ver knew, how we never knew." Then Monk steps back in and asks a few questions, its late, let it all get sorted out, don't believe all you see yet, but deep down the bass notes on the piano told the truth. Even if Monk goes on to tinker with, throw it up, play with it, look under it, above it, and all truth he says is truth no matter how you look at it. Griffin begs to differ—its more complex than that, things happened, I mean who ever heard of, days before the vote, and over his contentions, the sadness comes through even if he cannot make sense of it, a warble of supposition and "oh but if only" and Monk says "Really?"

With Monk's introduction on piano, the story is of the unexpected, unexpected evidence that confirms the result and the sax comes in and a plaintiff boy oh boy, boy oh boy, things have not gone as planned. The sax and piano say look look look, the evidence is clear we did not get the gig we had our hearts on, gather the facts and look them over "we really lost this one we really lost this one." Griffin then goes lyrical and with a message of face up to facts in a complex riff. Monk too competes for our ears strumming notes to remind us that the hard evidence is just too much to overcome—"we lost this one." A sax riff says oh this is the morning after the night before, it all did happen like we saw before we slept and dreamed, I beg you look at why, we cannot move forward, no this is a disaster for us.

Monk comes in and says it's real though and the sax begs us to get that loss as real, we did not get the gig we wanted and in a clear throw back swing melody, Griffin says we lost and wrap your head round the evidence, gonna have to face reality of what is and not what might have been and why. The sax riff of high notes asks the tough questions, poses them in a series of seeming riffs, a warble of notes asking plaintiff introspect and blame inwards, extrospection is like mad and blame them! Monk gives us piano high and low but is clear that introspection is the only way to go, go where the evidence leads to the facts, the facts, the fact that we lost this one, we really lost. The high piano keys are struck for a new dream, take the evidence and put it in, "we lost this one and there is no spin." Adbul-Malik drums a short military beat, we live in a big world, we must adjust, make peace, explore new rhythms, the horse race is done—look at the evidence! Monk and Griffin jointly state the evidence cannot be overcome, we lost, we lost and congrats to you, hail the new Chief!

So, with this strut through the stories of these tunes, dare I suggest we now concede that this business called democracy—this government of the people, by the people, for the people—is sometimes a messy business after all? For years we trumpeted its merits as so obvious as not to be seriously questioned, we decried dictatorship, sent observers to poor foreign countries to "ensure they get the process right" to ensure results reflect the rule of law and the will of the people. Now we learn the lesson we so often teach—no such problems here in the good old USA, voting is open and no one cheats, but everyone, it seems or many I meet, question the defeat, when from all reports, the victory was by the books, fair and square, even if not sweet.

Which brings me to the title of my column Misterioso. When I listened to the track of the same name, I heard Monk telling us a story, which grabbed us from the first few notes and spellbound we listened as the story developed, building up and taking you up the stairs and for a while you wonder, it's strange this but then you follow his storyline, listening and waiting, waiting to see the brave new vista promised by this never seen melody. And there is a problem, the stair case keeps winding going up and as you gasp at every landing in anticipation of the view, it cruelly eludes us and we see instead what we could never have imagined when the tune just started.

Or were we on the wrong staircase—did we get lost in that improvisation and take the wrong steps? Yes, did we make a misstep at that part where you hear the melody, somewhat, but then it goes off in a riff?