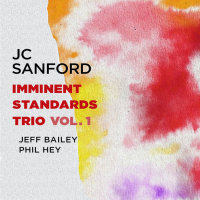 Trombone-led trios are few and far between, but Minnesota-based JC Sanford, a protégé of the late great Bob Brookmeyer, gives it a go with bassist Jeff Bailey and drummer Phil Hey on Imminent Standards Trio Vol. 1, whose title does not derive from imminent, as in "soon-to-be," but as in "Imminent Brewing," the trio's monthly performing space in Northfield, MN.

As for the album's groove, the trio has chosen relaxed, and glides easily through a program comprising four themes from the Great American Songbook and half a dozen jazz standards by such masters as Sam Rivers, Wayne Shorter, Thelonious Monk, Benny Golson, Freddie Hubbard and Duke Ellington. The mood is set on the opener, a barely recognizable reading of the Ray Noble flag-waver, "Cherokee," taken at a leisurely tempo that is certainly different if not entirely persuasive. Even Rodgers and Hart's "Where or When," nominally a ballad, is performed at an even slower pace than usual, one that borders on dirge-like. There are more visible signs of life on Monk's "Nutty," Hubbard's "Dear John" and the standard "It's You or No One," but elsewhere, solemnity prevails. Sanford says tunes and tempos were chosen shortly before the session, to assure spontaneity, so there was an unmistakable game plan.

Even though this is a trio date (Sanford's choice), it could have been appreciably enhanced by the presence of a piano. That is not meant to imply that Sanford, Bailey and Hey are not accomplished musicians; they are. On the other hand, the trombone can be a less than inspiring solo instrument, and a piano would have brightened the rhythmic framework. And unlike Brookmeyer, Sanford has no Gerry Mulligan or Stan Getz waiting in the wings to counterbalance his horn while adding color and variety.

As it is, the trio does the best it can given the boundaries within which it has decided to perform. Sanford and his teammates work well together, and solos are competent, albeit less than exceptional. It is simply a trim, well-mannered session, one which may not excite the senses but should not cause any undue distress.

Cherokee; Beatrice; Time After Time; Juju; Where or When; Nutty; It’s You or No One; Whisper Not; Dear John; Single Petal of a Rose.