By MIKE JURKOVIC
February 4, 2019
Sign in to view read count 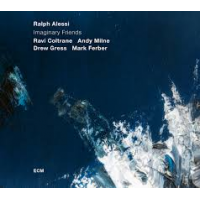 Ever leading the avant-garde, trumpeter Ralph Alessi has never been pressed for future-forward ideas or the time to express them in whatever setting best suits the music. Not counting his prodigious work alongside such leading figures as Fred Hersch, Don Byron, and Steve Coleman, in this tumultuous century alone Alessi has led and released such challenging works as This Against That (RKM, 2002), the blazing Cognitive Dissonance (Cam Jazz, 2010) with Jason Moran, his ECM debut Badia (2013), and the equally adventurous yet reassuring Quiver (ECM Records, 2016).

Imaginary Friends furthers Alessi's working template: allow the music and the musicians of the moment to evolve within each others' conscious and unconscious frameworks, then capture it at just the right point of creative harvest. Reuniting the quintet with whom he recorded This Against That, Ravi Coltrane, Andy Milne, Drew Gress and Mark Ferber come together with nine compositions worked to fever pitch on a short European tour, making the music feel and sound ready for any unknown.

"Melee" is a careening example. It is ten prime, spiraling minutes of dueling, with Coltrane's sopranino and tenor saxophones both nimble and sagacious while Alessi pursues him, sobering yet no less wanton. With fiery punch and amped-up finesse, bassist Gress and drummer Ferber propel the piece like mad timekeepers, slippery and meteoric, akin to the kinetic zen of fellow ECM pianist Nik Bärtsch. The same can be said of Gress, Ferber, and pianist Milne (making his ECM debut) on the pulse-driven, craftily shape-shifting conversations that create "Improper Authorities."

The elegant weave of Coltrane's warm, flowering grace and Alessi's whispering subtleties make "Iram Issela" ("Imaginary Friends")'s earthy and introspective lead worth repeated listening. The duo have been friends and bandmates since the late '80s and can read each other like few other front lines. With haunting harmonics and prepared piano, "Oxide" and "Pittance" place Milne at the center of the Alessi/Coltrane alliance. "Fun Room" is a tumbling collage of the many rich ingredients each member of the quintet brings to this exquisite mix, and leads into to the ruminative and somber colors of the title track.