Dave Tull: I Just Want to Get Paid! 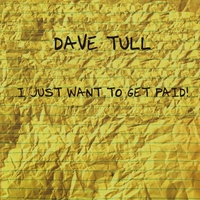 Whoa! Is that a sharp new Dave Frishberg lyric we hear poking fun at the pompous and assailing the absurd? Could it be Bob Dorough, Mose Allison or perhaps Giacomo Gates? No, the often humorous and always perceptive sentiments expressed on I Just Want to Get Paid! are those of Los Angeles- based sideman Dave Tull who actually makes his (apparently precarious) living as a jazz drummer. Based on this obscure gem of an album, recorded almost a decade ago in 2007 (perhaps he hasn't been paid for this one either), the erudite and multi-talented Tull (who wrote every song on the album) might fare even better (in a more discerning world, that is) as a singer / songwriter. Tull's melodies are lucid and engaging, his lyrics hip, subtle and, at times, flat-out hilarious, clearly on a par with the best work of the more widely celebrated tunesmiths mentioned above. And to ice the cake, he sings them in a candid and charming manner that enhances each lyric while artfully ensnaring the listener's ear.

Lest one think he is all fun and games, Tull writes love songs so warm and wise that they call to mind the Golden Age of American song whose masters included Porter, Berlin, Loesser, Rodgers and Hart, Lerner and Loewe, Rodgers and Hammerstein, Dubin and Warren, Burke and Van Heusen and so many others. "If You Hadn't Seen Me There" and "I Just Decided to Stay" are as heartfelt and romantic as love songs should be, and even so, they are only a shade or less removed from "Take One Look at Me," "Where Is All the Rain?" and "How Do You Know You're in Love?" In a more impish vein, Tull appends rib-tickling lyrics to such innately amusing themes as "I Just Want to Get Paid," "The Airplane Song," "You're Talkin' Too Loud," "The Minutes Pass Like Hours When You Sing" and last but not least, his inspired send-up of the great Joe Williams, "Every Other Day I Have the Blues." Working musicians may find the scenarios recited in "Paid," "Too Loud" and "Minutes" not only laugh-inducing but painfully close to home.

Through it all, Tull plays the drums, scats with assurance on a couple of tunes and even whistles amiably on "I Just Decided to Stay," working for the most part with his regular trio—pianist Corey Allen, bassist Kevin Axt—as well as guests Doug Webb (tenor and soprano sax) and Steve Huffsteter (muted trumpet on the perceptive "How Do You Know You're in Love?"). Tull is so unpredictable that when the last tune, "Got to Get Home So I Can See My Children," arrives, one can't help waiting for the inevitable other shoe to drop—which of course it never does. It's simply a light-hearted song about a guy who wants to get home "so he can see [his] children"—in this case, Tull's own dynamic duo, Fanny and Henry, whose exuberant greeting closes the album on a buoyant note. Five stars? Yes indeed—and even more if that were possible. I Just Want to Get Paid! may be hard to find but it is definitely worth searching for. Well done, Dave!

Take One Look at Me; I Just Want to Get Paid; Where Is All the Rain?; The Airplane Song; She Loves Me!; How Do You Know You’re in Love?; Every Other Day I Have the Blues; If You Hadn’t Seen Me There; You’re Talkin’ Too Loud; Quiet Corner; The Minutes Pass Like Hours When You Sing; I Just Decided to Stay; The Second Chance; Got to Get Home So I Can See My Children.