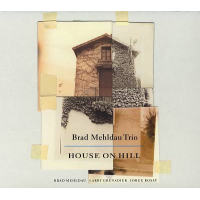 Recorded between 2002 and 2005, House On Hill is the final studio album by pianist Brad Mehldau's long-running original trio. Jorge Rossy, who was recently replaced by Jeff Ballard, occupied the drum chair in the group from 1994-2004. Revitalized by new blood, Mehldau's recent album with the revised lineup, Day Is Done (Nonesuch, 2005), was widely regarded as an artistic breakthrough, rendered distinctive by Ballard's impetuous rhythmic energy. On this departing album, Rossy demonstrates an equally valid but subtler approach.

The heir apparent to such impressionist masters as Bill Evans and Keith Jarrett, Mehldau has emerged as one of today's most distinctive voices. Prodigiously talented, with boundless imagination and a fiendish knack for interpreting contemporary material (from the Beatles and Paul Simon to Radiohead and Nick Drake), he is also knowingly respectful of tradition.

Eschewing standards for a set of all-original compositions, Mehldau culled these pieces primarily from the session that begat his 2004 covers album, Anything Goes (Warner Bros.). As his impressively thorough (some would say exhaustive) liner notes illuminate, these pieces fall tenuously under the banner of the theme and variations model—the classic head-solo-head format. Nonetheless, this veteran trio approaches these pieces with brazen harmonic invention and rhythmic verve.

Mehldau's singular writing is intricate and harmonically complex without ever being cerebrally impenetrable. However, his esoteric impressionism occasionally lacks the abstract vivaciousness he brings to the familiar cover tunes he artfully reinterprets. Never confrontational by design, these alluring but knotty originals have an air of reserved formality on first listen.

Although House On Hill may not rise to the conceptual highs of Day Is Done, it is an impressive document from an artist who continues to refine himself.