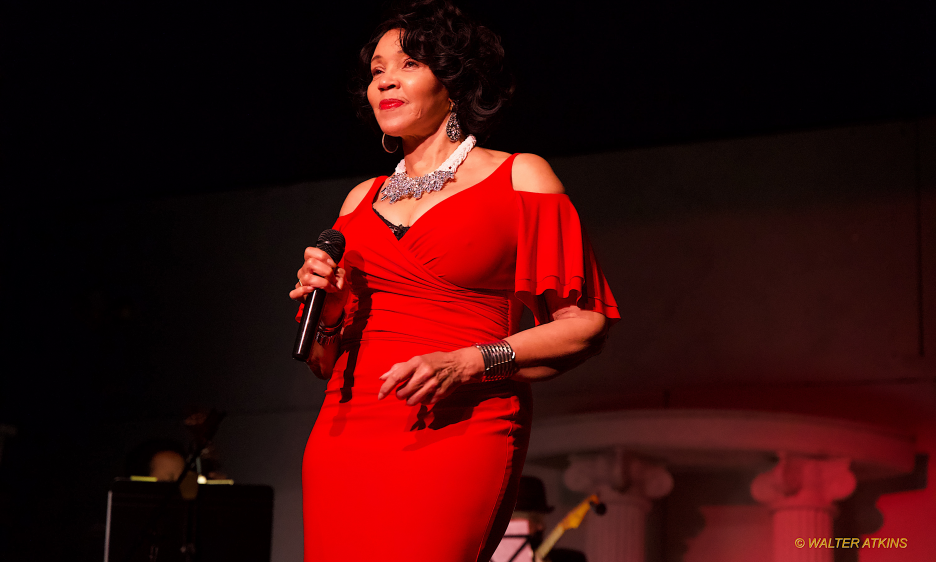 By Walter Atkins
December 4, 2022
Sign in to view read count

Nina Causey brought vitality and warmth to her role as Lena Horne in Horne to Strayhorn. It was a fitting month of celebrating and commemorating Lena' Horne's commanding contributions to American art and society.

In character, Causey discussed Duke Ellington and Billy Strayhorn's partnership and opened with "Lush Life." In the '50s she commented "Strayhorn was a dreamer when it was all we could do..." during the early challenges African Americans faced for civil and human rights. "I saw racism on myself and my people all my life. Anger segregation, discrimination and degradation." She described social activists Dick Gregory, Medgar Evers, and Dr. Martin Luther King 's "anointed speech, I Have A Dream. Hope it comes through" then went into "Daydream," which the prolific young writer composed for his "black queen" to sing.

Horne noted "I knew one day he would be mine" and she was the inspiration for much of his popular music. "Duke liked to talk about his sophisticated ladies, but I was Billy's Satin Doll." "Strayhorn created the classic "Take The A Train" at 23. She described the connection between Ellington and Strayhorn as that of a devoted father to son relationship that lasted a lifetime. Horne's feelings for Strayhorn were undeterred by his preference for men and she asked him to marry her. While clearly disappointed when he declined her proposal, she still hoped he might "change his love focus to Eros." He composed "Maybe" to "give me hope."

The vocalist went through the other songs with an enthusiastic response from the house. With the evening full of classic Strayhorn tunes, there was one notable exception. Causey sang "Stormy Weather," Horne's signature song which she "begged" to be added. The audience was very glad it was included. Besides commemorating the 60th anniversary of Berkeley's Black Repertory Theater, Horne was honored with the opening of Broadway's Lena Horne Theatre this month (formerly Mansfield/Atkinson Theatre).

Causey was asked about her motivation for doing the Lena Horne Billy Strayhorn work. "I've been asked to play Lena Horne for years by different people and different organizations. Aside from the fact that I love Lena Horne, I've been fortunate enough to play her role in the movie, "Cabin in the Sky," and I was featured as Lena Horne many times in the "Cotton Club Review" in Burlingame, CA. I've become accustomed to being referred to as a turn of the century, vocalist, and in particular, Billie Holiday, and subsequently, Lena Horne." Most of the musical productions, I performed in were at the Black Repertory Theater in Berkeley, CA. After a while, the Artistic Director, Dr. Mona Vaughn Scott, who is a great writer, wrote the fabulous musical play, and called it, Horne to Strayhorn. When she first asked me if I would play the part, my answer was a resounding Yes!"

When asked how she come to doing Dr. Scott work, and her connection with the Black Repertory Theater? Causey responded. Moving to the San Francisco Bay Area, "I started getting involved with different musical groups. In general, l familiarized myself with the musical community, in particular, jazz. That's when the director of the Bay Area Blues Society at that time, met with me at my request to help me get my name out there. He told me to go over to the Black Repertory Theater because they were having auditions for Billie Holiday. So I followed his advice, and was... chosen by the auditioning committee and of course, Dr. Scott, to play the starring role of Billie Holiday. The rest is history."

Dr. Scott told her "I had the ambience and the caring attitude toward people and the willingness to help, as was exemplified when Lena Horne chose to work in the civil rights movement. She also mentioned that my countenance and appearance is very close to Lena Horne's. Lena Horne had a strong, confident way about herself, yet she was very devout about her beliefs. She wouldn't let anyone take advantage of her and Dr Scott saw many similar qualities in me. She asked me to sing opera in the musical production at BRT's "Carmen Jones," and play the starring role. I worked in a dedicated fashion to achieve that goal. It was the first time I had ever sung opera in a major production, but I wanted to take the challenge."

The play attendees were pleased the talented vocalist Causey took up the challenge. Nina Causey brought vitality and warmth to her role as Lena Horne in Horne to Strayhorn. It was a fitting month of celebrating and commemorating Lena' Horne's commanding contributions to American art and society.