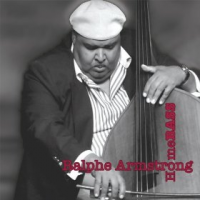 There must be something in the Detroit water, because the Motor City has probably produced more bass players per capita than any other American city. Not only in sheer numbers and variety, but also in terms of musical style and innovation. While Paul Chambers and Ron Carter would suffice for a locale in terms of civic pride, the city can also claim Motown session man James Jamerson as well as second generation players Robert Hurst and Rodney Whitaker.

Then there is Ralphe Armstrong, who is probably the most prolific bass man of whom nobody has heard. For the last forty years, Armstrong has recorded and performed with a Who's Who of modern jazz and rock, including John McLaughlin at the age of 17, Jean-Luc Ponty, Carlos Santana, Herbie Hancock, and even such pop performers as Robert Goulet and Lesley Gore. After such a long illustrious career, Armstrong finally decided to make his recording debut, with HomeBass, and the only question is: "What took him so long?" Armstrong is a veritable master of both the upright and electric basses, possessing an uncanny knowledge and proficiency.

Recorded live at the 1996 Detroit Jazz Festival, Armstrong performed what turned out to be a Miles Davis tribute. To assist him on this date, Armstrong put together a crack unit of top shelf Detroit players. Trumpeter Rayse Biggs is known for his work with Don Was, and Kid Rock, while the rhythm section includes guitarist Toty Viola, pianist Henry Gibson Jr, and Armstrong's longtime comrade in arms GayeLynn McKinney, who has distinguished herself as drummer for the seminal all female unit Straight Ahead.

Armstrong's intro is a rendition of "The National Anthem," which is done entirely with a bowed upright and nothing else. Then he swings into "So What," with an opening solo which calls to mind one of his musical role models, Paul Chambers, while playing it "The Detroit Way," which involves the bassist playing off the head of a tune. "Freedom Jazz Dance" is arguably a nod to Armstrong's main teacher and mentor Ron Carter, but features a style which takes the melody, stretches it and dances in and out of the time and rhythm. The follow-up is an elegiac rendition of "Dear Old Stockholm" played as a duet between Armstrong and his veteran pianist Gibson. After a swingin' version of "Stormy Monday," with vocalist Audrey Northington, Armstrong finishes up the set by taking his crew on yet a another Milesian journey. This time it is electric Miles on the spacey "Miles We Got To Go," where Armstrong and crew run da voodoo down while laying out on some hard rockin' funk. While Armstrong has solid creds amongst his musical peers and the jazz media, HomeBASS should put him on the map where he belongs.