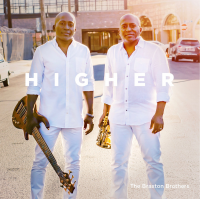 It's interesting how certain musical styles become punching bags for the critics. Disco grew out of R&B and funk in the mid-1970s—yet by 1979 it was so despised in many quarters that the Chicago White Sox had a near-riot on their hands when they opened Comiskey Park for "Disco Demolition Night" during a double-header against the Detroit Tigers. So many fans showed up (admission was 98 cents if you also brought a disco record to be destroyed between games) that security was overwhelmed and the second game canceled after the disco-haters overran the field.

Among jazz purists, "smooth jazz" is nearly as hated as disco was among hard rock fans 40 years ago. And yet, "smooth jazz" is nothing more than the continued development of fusion—the attempt to meld rock and soul elements into a jazz structure that grew out of Miles Davis' electric forays of the late 1960s. Many jazz fans who practically swoon over a classic Ray Charles side, who have a near-complete collection of Teddy Pendergrass, or who think Otis Redding should be measured alongside Johnny Adams as a soul-jazz singer, will nevertheless dismiss smooth jazz out of hand.

It is an often incongruous hostility.

The Braxton Brothers—reedman Wayne and bassist Nelson—lean more toward the soul side of the smooth jazz equation, but have the chops of mainstream jazz players. These guys, and the session players they brought on for their self-released "Higher," can flat out play. Wayne has a gorgeous tone, whether he's playing tenor, alto or soprano sax. And Nelson could sit in on bass for any top funk combo—Earth, Wind & Fire, Ohio Players, The Commodores.

Most of the tracks here are of an instrumental R&B flavor. A more polished Parliament Funkadelic vibe shines through "A Stronger Love." The first single from the album, "The Only Woman In the World," also has a late 1970s / early '80s soul sheen to it. "Beauty" opens with a Caribbean lilt, a touch of reggae to the beat. And the closing track, "I'll Be Here," hews to a 1990s UK neo-soul groove.

There are a couple of areas where "Higher" seems a bit flat. The first is the lack of a knock-out hit song. The melodies are all pleasant enough, but none are likely to get stuck in your head—there isn't a killer hook to be found here. George Benson and Chuck Mangione proved decades ago that you don't need vocals for a hit song. Compounding the lack of memorable melodies is the fact that the arrangements are all quite similar—every song is played in a slightly up-tempo beat, with bright sax and guitar out front. It all begins to sound a bit the same after awhile.

But the overall experience of "Higher" is of a well-produced, lovingly played album of improvised instrumental music.

The Only Woman In the World; You Care About Me; Back in My Arms; Higher; Something in My Heart; Because of You; A Stronger Love; Beauty; Where I Wanna Be; Just to Be Loved; What Would I Do.