The Big Easy has spawned more than its fair share of musical offspring. But just being a native son does not guarantee success. One has to earn it. There are many who vocalize in R&B and blues, but not too many real soul singers. They have a tendency to get weeded out real quick.

Johnny Adams was a long-time regular on the New Orleans music scene, beginning with his 1959 rhythm and blues hit "I Won't Cry." Adams, whose velvety voice could stretch into a high falsetto with ease, mastered a handful of musical styles, including gospel, blues, soul, jazz, and country. Over his nearly 40-year career, he recorded in these varied genres on a number of labels, yet he never reached the national stardom of some of his contemporaries. He performed largely in New Orleans, where he became a local legend.

The eldest in a family of ten children, Adams was born on January 5, 1932, in New Orleans, Louisiana. He was raised in a religious family and sang in the church choir, so it is not surprising that he was first drawn to gospel music. At age 15, Adams left school, got a day job, and began performing at night with the Soul Revivers, a gospel quartet. With this quartet, he honed what was to become his signature style of vocal acrobatics, ranging deftly from low to high notes. From that group he signed on with Spirit of New Orleans, and with Bessie Griffin and the Consolators. Yet Adams's virtuoso voice stood out from the ensemble.

In 1959 he jumped onto the rhythm-and-blues charts with a single, "I Won't Cry," produced by Mac Rebennack on the Ric record label. The ballad became one of Adams's most memorable songs. Although it might have been the first step on his road to stardom, the song did not catapult Adams into the national spotlight. Ric label owner Joe Ruffino held up national distribution of the singles, and Adams claimed that Ruffino held him back. "I really believe I could have gone somewhere if Ruffino would have just co-operated with the major record companies." Still, Adams continued to record with Ric, gaining national attention with "A Losing Battle," written by Rebenack, which made the rhythm and blues charts in 1962.

After Ruffino's death in 1963, Adams was free to forge his own path. He toured the "sugarcane circuit" of local bars and clubs, where he earned a solid reputation and a loyal fan base. In the late 1960s and early 1970s, Adams recorded a handful of albums for several independent labels. Among the most commercially successful were his singles "Release Me," which made a brief appearance on the Hot 100 charts, "Reconsider Me," a soul-country hybrid, and the album “Heat and Soul.” In 1978 his remake of Conway Twitty's "After All the Good Is Gone" landed on the national rhythm-and-blues chart. While he remained a New Orleans fixture throughout the 1970s, the rest of the world remained largely unaware of himDespite these modest successes, it was not until 1983 that Adams developed a good working relationship with a record producer, Scott Billington of Rounder Records.

Finally, Adams found a record company and a producer with whom he could have a fruitful relationship. He began working with Rounder Records, a collaboration that would last for the rest of Adams' career. Billington recognized that Adams' talent extended to a wide range of musical styles. Adams could sing sophisticated jazz. He could sing sentimental pop or stirring gospel. He had precious few peers when tackling Southern deep-soul classics. And on the right night, with the right band, he all but owned the blues.

In the 1980s, at a time when the blues became subsumed under the heavy beat of the most popular music, Adams kept true to his roots, showcasing what he did best. Backed by musicians such as guitarist Walter "Wolfman" Washington and pianist Dr. John (a.k.a. Mac Rebennack), Adams recorded a series of nine albums in which he explored his favorite music: jazz, blues, gospel, standards, and contemporary songs, written by Doc Pomus, Percy Mayfield, Dan Penn, and John Hiatt, among others. In the album “From the Heart,” (1984) Adams reveled in his new- found freedom to express himself. He followed this up with “After Dark,” in 1986, and started on a roll.

Adams's recordings with Rounder demonstrated his versatility. “In Walking on a Tightrope,”(1989) a collection of songs by Percy Mayfield, he showed his thoughtful jazz side, while in “Good Morning Heartache,” (1993) he sung classic American jazz songs. The 1991 recording “Johnny Adams Sings Doc Pomus,” also showed off Adams's love of jazz, while albums such as “One Foot in the Blues,” (1996) and “Room with a View of the Blues” (1987) explored the artist's bluesy side.

Along with gaining more control over the material he recorded, Adams also became more well-known outside New Orleans after beginning his work with Rounder. He began to tour nationally and even internationally as more people realized the power of his voice and range of styles. During the last decade of his life, Adams toured widely with singer-guitarist Walter "Wolfman" Washington. They often appeared on European stages, where Adams displayed a stage presence as potent as his recordings.

Adams recorded “Man of My Word,” in 1997, an album on which he defies all expectations by digging into hard Southern soul. The sessions were difficult for Adams. Although he was suffering from cancer, he put together a strong album. It lives up to Adams mighty legacy, and easily rates as one of the best roots R&B outings of the year. It was special for everybody involved.

Johnny Adams succumbed to the cancer and died on September 14, 1998, in Baton Rouge, Louisiana. He continued to receive more recognition for his work after death. In 1999 he received a Pioneer Award from the Rhythm and-Blues Foundation. He had also received the W. C. Handy Award, NAIRD India Award; six Big Easy (New Orleans) Awards; several OffBeat (New Orleans) Best of the Beat Awards.

Then in 2000, Rounder issued an album sampling the best of his work, “There Is Always One More Time,” it featured not only tracks from Adams' previous albums, but also some collaboration with other performers. The album documents an artist consistently in his prime. For almost 40 years, Johnny Adams moved audiences with a stunning voice that could grace any genre he chose.

Rounder, by popular demand released “The Great Johnny Adams R&B Album” in 2006. This is a collection of the kind of gospel-rooted rhythm and blues songs for which Johnny was best known, with accompaniment from Dr. John, Walter "Wolfman" Washington, Duke Robillard, George Porter, Jr. and an all star cast of supporting New Orleans musicians. 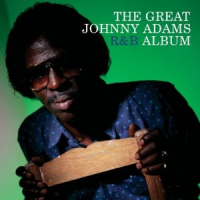 There Is Always One...

All About Jazz musician pages are maintained by musicians, publicists and trusted members like you. Interested? Tell us why you would like to improve the Johnny Adams musician page.