One of the most enigmatic and talented Soul men of all time, Bobby Womack has been a link from 50s Gospel to 60s Soul to 70s Rock and to some of the greatest musicians in each genre. Born in an extremely devout religious family, he was singing Gospel with his brothers Cecil, Friendly, Harry and Curtis as the Womack Brothers while he was still a child.The talented group was discovered by Gospel/Soul legend Sam Cooke, who renamed them the Valentinos and transformed them into a teenage secular vocal group.

By the early 60s The Valentinos were touring with James Brown and scoring on the R&B charts with their first hit, "Lookin' For A Love." Cooke's death in 1964 sent the group on a spiral from which it would never recover.

Without their mentor, The Valentinos faded, and Womack became principally a writer and guitarist for an A-list of 60s Soul and Rock stars, including Wilson Pickett, The Rolling Stones, Sly Stone, Aretha Franklin and others. Interestingly, while he had established himself as a top notch songwriter, it took a 1968 cover of the pop standard "Fly Me to the Moon" to jump start his solo career, hitting the Soul Top 20. Over the next 4 years, he alternated original compositions ("What Is This," "More Than I Can Stand") and pop covers ("I Left My Heart In San Francisco," "Sweet Caroline") to stay a middling Soul charter.

From 1972-76, a series of his own excellent compositions propelled him to the top of the Soul charts. Songs like "That's the Way I Feel About Cha," "Woman's Gotta Have It," "Harry Hippie," "Check It Out" and "Daylight" provided a Southern soulfulness that paled the smooth sounds emanating from Detroit and Philadelphia. During this period Womack also hit the Pop Top 10 for the first and only time with a cover of the old Valentino's song, "Lookin For A Love." He also wrote the classic instrumental “Breezin’” that was a hit for guitarists Gabor Zsabo, and George Benson.

Personal problems and his inability to adjust to the changing music scene left Womack on the sidelines in the latter 70s, and by 1980 it appeared he was headed for the oldies circuit. However, he signed with the fledgling Beverly Glen label and released 1982's “The Poet,” a surprise #1 album and Womack's best LP in years.

This was the period for Womack's seven minute masterpiece, "If You Think You're Lonely Now" and the follow-up single, "Where Do We Go From Here." Unfortunately, a fallout with Beverly Glen led to a two year delay before he released “The Poet II” on MCA. While not as strong as the previous album, it included a great duet with Patti LaBelle, "Love Has Finally Come At Last," which hit Soul #3. Womack scored again the next year with the excellent “So Many Rivers” and its haunting hit single, "I Wish He Didn't Trust Me So Much."

Womack continued to record sporadically over the next decade, releasing fairly good material through the mid-90s. Then, after nearly a half decade break, in 1999 Womack cut two discs, a Christmas CD called “Traditions” and his first Gospel CD, the critically acclaimed “Back to My Roots.”

It is a shame that Bobby Womack never achieved the across-the-board acclaim that his talent deserved. While revered by both Rock and Soul musicians, his popular appeal was generally limited to Soul audiences and to two periods (1972-76 and 1982-85). However the quality of his songwriting and the singularity of his emotive, soulful voice make him one of the most important Soul performers of all time. 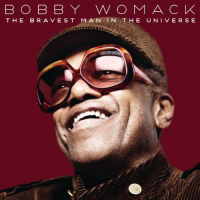 The Bravest Man In...

All About Jazz musician pages are maintained by musicians, publicists and trusted members like you. Interested? Tell us why you would like to improve the Bobby Womack musician page.