Otis Clay is one of the premier deep soul and gospel singers working today. His raw, fiery vocals drive an energetic and danceable blend of soul, R&B and Blues in the tradition of such deep soul singers as Otis Redding, Wilson Pickett and Solomon Burke.

A master showman, Otis Clay stays in demand for festival and concert appearances in the U.S., Europe and Japan. Noteworthy recent appearances include headlining The 2006 Japan Blues and Soul Festival Tour, headlining the opening night and being Honorary President of The 2006 Blues Passions Festival in Cognac, France a special guest appearance at The Chicago Emmy Awards in Nov., 2006 and the 2007 Chicago Gospel Music Festival.

Born in Waxhaw, Mississippi, Clay began his career in gospel singing with groups such as The Pilgrim Harmonizers, The Gospel Songbirds and the legendary Sensational Nightingales. His recording of "When The Gates Swing Open" was a hit in the mid-80's and is included on “The Gospel Truth” cd released on Blind Pig Records. Both "When The Gates Swing Open" and The Gospel Truth remain staples on gospel radio today. As a singer and producer, Otis Clay remains very active in gospel. “Walk A Mile In My Shoes,” a new cd featuring Otis' version of this classic song has been released on his own Echo Records label.

Clay launched and established his career as a deep soul singer with his first recordings made in the mid-60s for George Leaner's One-derful label in Chicago. A series of hit singles including "Trying To Live My Life Without You" produced by Willie Mitchell in Memphis for Hi Records followed in the '70's. Otis has also recorded for the Cotillion, Kayvette, Elka and Rounder labels as well as his own Echo Records. The intensity and passion of his live shows are captured on “Soul Man: Live in Japan” (Rounder) and “Respect Yourself” (Blind Pig) recorded live at The Lucerne Blues Festival in Switzerland.

A long time resident of Chicago's West Side, Otis Clay is actively involved as a board member of People For New Direction, a community-based non-profit creating economic initiatives to address a number of issues on the West Side. People For New Direction consists of West Side businessmen and women, doctors, ministers and others who believe strongly in giving something back to the community where they live and work.

As Chairman of The Board of the non-profit Tobacco Road, Inc. (TRI, Inc.), Otis was heavily involved in the extensive planning, fundraising and development of The Harold Washington Cultural Center at 47th and King Drive which has served as the cornerstone for the revitalization and redevelopment of the historic Bronzeville neighborhood. The Cultural Center, which includes the state-of-the-art 1,000 seat Com-Ed Performing Arts Theatre, is built on the former site of The Regal Theatre, the legendary venue for national and Chicago-based R&B, soul, blues, jazz and comedy stars.

Whether bringing audiences around the globe to their feet with his fiery brand of soul and gospel or working tirelessly with community and church leaders to provide better economic and cultural opportunities for West and South Side Chicago residents, Otis Clay has proven himself to be a national treasure. Show less 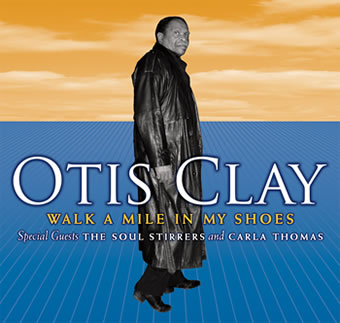 All About Jazz musician pages are maintained by musicians, publicists and trusted members like you. Interested? Tell us why you would like to improve the Otis Clay musician page.