By CLIFFORD ALLEN
February 18, 2010
Sign in to view read count
History paints an image of high energy rock music and free improvisation as having very little to do with one another—which isn't surprising considering the fact that heavily-amplified rock power trios were marketed as improvisation-heavy blues for mostly white audiences (giving saxophonist Albert Ayler short shrift). When jazz musicians like drummer Tony Williams and guitarist John McLaughlin opted for rock music and signed to major labels such as Columbia, purists saw it as selling out. This despite the fact that McLaughlin's rock-tinged work with baritone saxophonist John Surman on albums such as Where Fortune Smiles (Dawn, 1970) is filled with unbridled and decidedly un-commercial wailing. Yet amid the ever-increasing amount of free improvisation sessions committed to disc, the high-octane end of things seems to be occupied just as often by electric guitarists as powerhouse saxophonists. 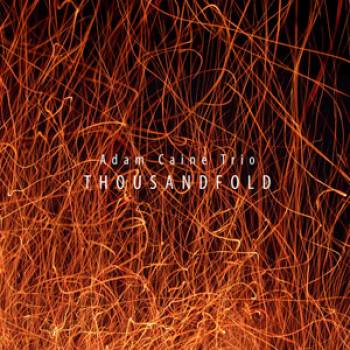 Thousandfold is Brooklyn-based guitarist Adam Caine's debut as a leader; he's worked with Soundpainting composer Walter Thompson in addition to leading his own quartet, quintet, and the trio heard here. He's joined on these eight improvisations by regular conscript, drummer John Wagner, and bassist Tom Blancarte. The unaccompanied opening to "Castros" provides a good space in which to view Caine's approach to the guitar. It begins with blocky, almost Thelonious Monk-like cadences (albeit fuzzed-out and distorted) before slowly piling arpeggios contoured by delay and seasick volume pedal actions. With an array of tools and a significant amount of electricity, not to mention the skating rhythm of Blancarte and Wagner, it would be easy to imagine Caine taking off on nervy flights. However, there's a sense of introspection beneath his overtone-laden chunks as he investigates phrase logics before completely unspooling them.

That's not to say there isn't a fair amount of jarring music here—the opening "Outer Church" quickly moves from jagged midrange tweak to sludgy undertow, the leader alternately hunkering in low blats, blues-rock charge and metallic crunch as bass and percussion surround with a mutable surge. "Ride the Tiger" is in homage to bassist-composer Adam Lane, who Caine has worked with. In comparison to some of the dirtier slogs on the set, this piece is almost "clean," darting fistfuls of sounds and top-heavy peals skimming Wagner's Sunny Murray-like churn and Blancarte's supple pizzicato outlines. "Invisible Kingdom" plies fullness and thinness, col legno bass rattle and snare chatter a shifting backdrop for brittle clusters and spiky repetition. Not quite "free jazz" or "free rock," Thousandfold is certainly scorching. 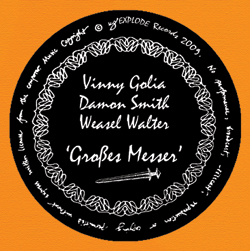 Drummer and bandleader Weasel Walter has spent time leading guitar-heavy electrified spazz-improv units under the Flying Luttenbachers moniker, not to mention the Masayuki Takayanagi-inspired Plane Crash (ugExplode, 2009, with guitarist Henry Kaiser and bassist Damon Smith). But just as much of his discography centers on taking free improvisation to its densest extremes. One of the last sessions that Walter cut while living in the Bay Area, before his recent relocation to Brooklyn, was this power trio with Smith and reedman Vinny Golia, Grosses Messer ("Large Knives"). Golia's recordings of late have tended to focus on spare, moody chamber improvisation or huffing explorations of breath's lower depths. An excellent composer to boot, it has been some time since his lung power has been captured in a raucous set of free playing. "Plancon a Picot" finds Golia on bass saxophone, digging in with wide swaths of gaudy reed-paint as Smith yanks and pummels an amplified upright bass. Rare indeed is the recording where Weasel Walter's particle barrage is nearly overpowered by masses of air and string. That's not to say Golia's blowing isn't without a discernible sense of phrasing—on the contrary, his sweeping clear-cuts of saxophony have a chugging relentlessness.

Smith and Walter are positively furious on "Murder-Hole," gritty arco and pummeling triplicate gallop displaying a fat lilt, while Golia's possessed saxello trills punch holes in coagulation. There's a crazed dance to "Butterknife," country-punk at light-speed mated with buzzing piccolo saxophone, Golia riding high above the thrash. Honest-to-goodness timekeeping makes an appearance on "Mercygiver" with meaty pizzicato and Walter's hyperactive take on drummer Rashied Ali's barnstorming free-bop. Though amazingly cutting, the soprillo doesn't exactly fill in as much area as a bass sax. Only one piece, "Voluge," features tenor, on which Golia's hard-bitten lyricism comes through. But there's more than enough out-front excitement and manic facility at the low end to make pieces like "Lance, Bill and French Dirk" sing in overdrive, a boppish snatch even appearing during an unaccompanied bass saxophone blast. Despite a few abrupt edits, this limited-edition disc is recommended listening for those who like their improv in the red.