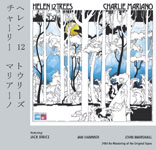 Of labels awaiting first-time release on CD, Germany's MPS is the undisputed holy grail. With plans to release fifteen of its 400+ titles in carefully remastered and beautifully designed mini-LP sleeve packages each year, Promising Music is righting a wrong in the best possible way. Always eclectic, MPS ran the gamut from free jazz to fusion and everything in-between, and Promising Music's first six titles demonstrate the full breadth of this historically significant label.

Mariano's writing approaches electric jazz somewhere between a compositionally focused European classicism and the more visceral, solo-heavy approach taken by artists on the other side of the Atlantic. That said, Bruce, Marshall and percussionist Nippy Noya bring out the funk mightily on the brief-yet-episodic title track, with Hammer's guitar-like synth a familiar texture bolstered by Marshall's seamless blend of virtuosity and groove. Mariano's solo heads for the outer limits but, sadly, is never given the chance to fully develop as the song fades at just under five minutes.

Mariano's South Indian interests are given a greater groove on the hypnotically modal "Parvati's Dance," with Bruce demonstrating that his superstar days with Cream were but one facet of his reach, and Seifert justifying his reputation as "the Coltrane of the violin." The brief "Sleep, My Love," finds Mariano and Seifert locked into an impressionistic flute/violin duet, gradually augmented by sonic manipulation that creates a more expansive sounsdcape. "Charlotte," on the other hand, is a more organic, acoustic piano/soprano sax duet that presents an elegant side to Hammer rarely heard at the time.

Complex meters abound on Mariano's insistent "Avoid the Year of the Monkey," while the equally propulsive "Neverglades Pixie" features both Mariano and Seifert in powerfully expressionistic form, proving it's possible to swing over a rock beat. But it's Hammer's dichromatic "Thorn of a White Rose," with brief but compelling solos traded between Seifert, Hammer and Mariano, where the tragedy of the violinist's passing in 1979 at the age of 33 is hammered home.

This long overdue reissue of Helen 12 Trees may finally afford it the acclaim it deserves. While fusion was taking a decided turn towards excess in North America, Mariano proved that it could be a more all-encompassing term, incorporating elements of South Indian music, classical impressionism and sophisticated jazz harmonies alongside potent, rock-based grooves and concise but muscular soloing.