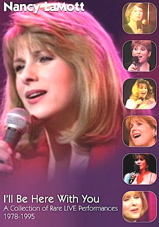 Nancy LaMott was the last of a breed—not an improvising jazz singer in the tradition of Ella Fitzgerald, Sarah Vaughan and Karrin Allyson; not a singer-songwriter like Carole King, Joni Mitchell, or Eva Cassidy. Instead, she was a genuine cabaret artist, the American equivalent of an Edith Piaf, a performer in the grand tradition of a Mabel Mercer or Julie Wilson.

She also was just about the brightest, freshest, classiest vocal talent to emerge during the 1990s. The voice, a magnetic instrument with a life all its own, along with the musicianship, generous spirit and composure come through from the very first moments of this DVD, giving viewers scarcely a hint of the struggles Lamott faced—ranging from the public's ignorance about cabaret to her numerous personal challenges.

This reviewer first heard Nancy LaMott in 1995, performing a sublime "Moon River" on CNBC's Charles Grodin Show. The stardust had barely settled when a week later news came of her death from uterine cancer preceded by years of battling Crohn's disease. Then came insult added to injury when, following what was a hastily-assembled marriage during her last 45 minutes of life, litigation stemming from estate squabbles restricted and all but stopped commercial distribution of her recordings for almost ten years.

Previously only a rough-cut, 30-minute tape of Nancy LaMott video footage was available, providing some insight into the singer's background but offering little in the way of complete musical performances. With 24 selections culled from television appearances and non-professional night club tapings, the present collection does much more than tantalize, offering an opportunity to watch the singer's development from 1978 to 1995—most of the changes merely cosmetic at that. From the very first performance, "But the World Goes 'Round," she displays the power and poise of the trooper she was, even if a bit of "star grooming" was yet to come.

Her musical alter ego, pianist Christopher Marlowe, is the half of the act that sounds somewhat stiff in these early stages. With the sixth selection, "You Must Have Been A Beautiful Baby," the audio quality is at least respectable, taking on some of the same frequency range and presence as the singer's commercial recording of the tune. And with Irving Berlin's "I Love A Piano," LaMott's spirited interpretation is supported by her pianist's equally inspired arrangement and playing. (If the art of Nancy Lamott had received attention proportionate to its true worth, Christopher Marlowe would likely be among the most sought-after accompanists on the scene today.)

Fans who have an image of Nancy LaMott as a glamorous and vulnerable diva simply don't understand "the life"—the grind, the empty houses, the monotony of working the same shows for the same audiences, the greater emptiness at realizing there are no more bookings. From the beginning, LaMott comes across on the DVD as a power-packed, small and slightly pudgy but determined, tough and resilient performer. Solid and grounded, she seems made of the right stuff to handle a business that can be relentlessly punishing and ruthlessly unfair. But who knows to what extent the emotional resources she drew upon for her performances—each as much a dramatic "event" as a song reading—also took a physical toll, exacerbating what was a genetic disposition into a life-threatening illness?

The uneven technical quality of these video tapings prevents recommendation of the DVD as the best place to start for those listeners new to LaMott. In fact, practically any of the CDs from her limited, six-disc discography can be safely recommended ahead of the DVD (let song listings be a guide). Only her last studio album, Listen To My Heart (Midder, 1995), a big- production affair that occasionally ventures into Barbra Streisand and Barry Manilow territory, might call for some degree of discretionary caution. For those who have already been touched by the voice and now regret never seeing its face, the DVD certainly offers consolation if not another piece to the puzzle of a vibrantly alive artist who, at the age of 43, left us just as her rising star appeared ready to cast its luster over a national audience.

To be able to watch LaMott perform Jule Styne's "Time After Time" or Cole Porter's "So In Love" is like experiencing either song for the first time—a revitalization of a familiar standard and a personal revelation on the order of Billie Holiday's late recordings of "You've Changed" or "But Beautiful." Bassist Charlie Haden once said (in so many words) that any musician worth his salt must be willing to give his life to the music or forget about it. A somewhat extreme, even melodramatic notion, perhaps, but such trade-offs happen—mostly out of view—all the time. Nancy LaMott brings to the center of consciousness the sacrifices of the artist and the privileged place of those of us who are so blessed as to be recipients of the artist's gift.

Tracks: But The World Goes Round; Another Mr. Right; Some Other Time; Loud Is Good; Time To Remember; You Must Have Been A Beautiful Baby; I Love A Piano; It Ain't Necessarily So; The Darktown Strutters' Ball/Alexander's Ragtime Band; Alexander's Ragtime Band/The Darktown Strutters' Ball; Where Do You Start?; We Can Be Kind; Time After Time; Just In Time for Christmas; I'll Be Home For Christmas; The Best Is Yet To Come; All The Things You Are/I'm Glad There Is You; I'll Be Here With You; Help Is On The Way; Out Of This World/So In Love; Waters Of March; Moon River; Listen To My Heart.