When I was a kid, I would slink out on stage, just play and not even look at them or smile. I learned better.

Dick Hyman is one of the most versatile jazz pianists, equally at home in ragtime, stride, swing and bop. He's been a full-time professional for nearly 60 years, with many solo piano recordings, a series of duos with the late Ruby Braff, plus albums of piano duets with Derek Smith, Ralph Sutton, Dick Wellstood and Roger Kellaway, in his extensive discography, which also features outings with larger groups. Hyman has composed and arranged for numerous film soundtracks and record dates. His vast repertoire includes thousands of standards and forgotten chestnuts, in addition to an extensive knowledge of jazz compositions.

All About Jazz: I own many of your CDs and LPs; The Jazz Piano Quartet's Let It Happen (RCA, 1974) has long been a favorite.

Dick Hyman: That is even more fun to listen to in Quadraphonic sound. We made it for one of RCA Victor's small number of attempts to provide a special library of stuff that could be done that way. Roland Hanna, Marian McPartland and Hank Jones all took part. I have done considerable things with Marian over the last five years. Marian, the late classical pianist Ruth Laredo and I comprised a trio of pianists and we did quite a few concerts together under the name Keyboard Crossover. Ruth died in 2005. I haven't seen Hank in a long time. I know he's been very active, I keep reading about him. Roland Hanna died in 2002.

AAJ: You know so many tunes. How did you learn such a wealth of material?

DH: When I was very young, I went through a phase of playing single engagements around New York, club dates for the kind of music that was purveyed by Lester Lanin and similar outfits, who would provide orchestras for many different events on the same night, typically Saturday, in country clubs, hotel ballrooms and affairs of all sorts. Hundreds of these things were going on at once. There was a core of musicians who knew all the tunes. That meant you had to be familiar with every well-known musical, starting back in the '20s. It would typically start with "Night and Day" and include other Cole Porter songs, Richard Rodgers' "The Lady is a Tramp" and all the peppy songs of the '20s like "Ain't We Got Fun?," the torch songs of the '30s. You were expected to know everything, the pianist especially. The whole evening was ad-lib, it wasn't jazz, it was just rhythmic dance music.

The exact sequence was determined at the spur of the moment by the leader, who would call songs by raising up three fingers for an E-flat. The pianist would immediately modulate circuitously into the suggested key and then everyone would start in on the next tune. That's how it went, sometimes for the entire evening. That's where I learned most of the songs.

AAJ: You are one of the most adaptable pianists, particularly in your 1977 Chiaroscuro LP Theme and Variations on "A Child is Born" [where Hyman played his conceptions of other pianists playing Thad Jones' song]. I especially enjoyed the Art Tatum variation.

DH: That LP was never reissued. [Label founder] Hank O'Neal and I have talked about it, but it will have to be extended and we've never got around to it. One of these days, maybe. The Tatum was a lucky take. Oscar Peterson was one who could replicate him well. There are others, like Luther Henderson, who has recorded one or two albums and made it his life's work to do it. But in my case, you have to have a little bit of luck.

AAJ: You've made quite a few recordings.

DH: After the last concert I did at the [92nd Street] Y, someone brought me a Slim Gaillard French reissue, which included something I recorded with him in 1951. I showed it to some of my younger colleagues and they were in consternation.

AAJ: Tell me about your upcoming [2008] concert featuring The New York Mix.

DH: For this kind of concert, we always have two pianos on stage. There are solo and duo performances and for moments of high showmanship, we might even gang up with two people on each piano; that isn't altogether musical, though sometimes dramatic. We also have [bassist] Jay Leonhart and [drummer] Eddie Locke. Some pianists may prefer to play with accompaniment, others not. Saxophonist Houston Person will provide relief from keyboards. The idea of The New York Mix was to gather some of the many pianists who are around New York City.

AAJ: Meral Guneyman was a new name to me until last year.

DH: She's a marvelous player, principally classical, with accomplished technique and training and a profound interest in jazz. She's not a jazz pianist, but she plays with great understanding of jazz arrangements. We recorded a CD together called Playful Virtuosity, which is in some ways remarkable. She's such a good pianist and I like playing with her very much. We've played several times in addition to that recording. She's a great partner, she's able to rip off those very difficult Earl Wild arrangements of Gershwin and also she's been playing two piano arrangements of my own things that I wrote for us.

She's a wonderful foil for me to have. I'm more of an improviser, of course and she's more of a fixed note reader. The other pianists include Ray Kennedy, with whom I did an album a couple of years ago. Ray was the pianist with the John Pizzarelli Trio for a long time. Ray is the youngest guy I've gotten to know recently, so we are very much on the same wavelength. I came to know Norman Simmons some years back when he was musical director for Joe Williams. We did a jazz cruise together. He has accompanied many singers and held his own quite nicely as a solo pianist as well. Ted Rosenthal can play just about anything. For the last few years, he has gotten highly involved in teaching; he has students at many schools and he is also musical director for singer Ann Hampton Callaway and has also served other singers.

He and Bill Charlap are close friends. They took over one of the things I used to do at the 92nd Street Y, the series where Derek Smith and I would critique and coach pianists, ranging from professionals to young kids, anyone who wanted to perform in front of pianists and an audience, right before the evening concerts began. We didn't draw the line at jazz, we also included show tune, cocktail-style piano players. Quite a few of them had drifted into other occupations but still had a yen to play jazz piano. Houston Person is a terrific saxophonist. I've worked with him numerous times and he is a very swinging, melodic player.

DH: It's one more of I don't know how many "Dick and Derek's Annual Jazz Party at the Y" concerts. It's just a free-for-all thing, a party setting with everyone sitting on the stage, including relatives and guests. We serve Cokes and pretzels and have furniture around and try to party as much as we can. In addition to Derek and me, Bill and his new wife Renee Rosnes, Eddie Locke, [bassist] Nicki Parrott, [guitarist] Howard Alden, the father-and-son trombonists Bill and John Allred and singer Carol Woods; she is a very versatile singer who can belt out a song or do something very tender. 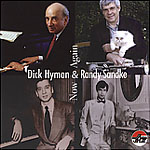 AAJ: What future projects do you have planned?

DH: I'm going to be recording a CD of Bix Beiderbecke for Reference Recordings in San Francisco. This is stuff that's been dear to me since I was a little kid. He only composed five published piano pieces. For the rest, I'll go to the various records he made under his own name or with Paul Whiteman or Jean Goldkette. I'll attempt to do piano replicas, with the Bix parts at least intact.

AAJ: What about other releases?

DH: The CD-ROM 100 Years of Jazz Piano is going to be reissued in a boxed set of five audio recordings and one DVD. It will have all of the contents, less the computer graphics and games. All of my playing will be there, including the lessons I did on Tatum and other people. That will be out on Arbors. [Owners] Mat and Rachel Domber are very nice folks and I'm very pleased that they are undertaking this project, rather than just putting out one CD.

AAJ: You are one of a rare breed who actually talks to the audience and names tunes, something the new jazz listener appreciates.

DH: I take that into account, believe me. Even if it seems to me that the audience is preponderantly gray-haired, I try to make friends with them. When I was a kid, I would slink out on stage, just play and not even look at them or smile. I learned better.