By Mark Corroto
February 12, 2018
Sign in to view read count 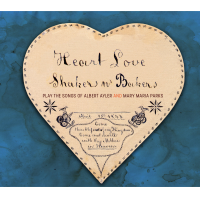 For most of us it is, and always has been, red states and blue states. I'm talking us vs. them, liberals and conservatives, or my ball team and yours. Same goes for music. The moldy figs vs. beboppers and later, neocons vs. avant-gardists. Yet, some musicians like Albert Ayler, as a radical departure from the norm, lived outside of such designations. He did so at the commencement of his career and also at its conclusion. Both phases drew the ire of critics and fans alike.

Early in his recording career he was criticized for marrying free jazz with military marches and New Orleans brass. From this, Ayler forged a new direction in jazz that had a major influence on John Coltrane. After creating a semi-cult following in New Thing circles, his final two studio recordings, New Grass (Impulse!, 1969) and Music is the Healing Force of the Universe (Impulse!, 1969) which incorporated R&B, soul, and rock, were roundly condemned by his followers as a sellout or maybe worse, a breach of faith. Ayler drew no lines which he would not cross.

If Ayler's music is performed today, you'll mostly hear covers of his early compositions like "Ghosts," "Bells," "Spirits," and "Omega Is Alpha." No one champions his later works, that is unless you're saxophonist Jeff Lederer, a man who also knows no boundaries. His band Shakers n' Bakers melds Ayler's free jazz with the philosophies of the utopian Shaker religion. Lederer released an eponymous titled recording in 2006 and Yearning For Zion (Little (i) Music, 2008). He also combines Ayler with sailor's sea shanties on Brooklyn Blowhards (Little (i) Music, 2015), but that's another story.

Heart Love revisits Ayler's final two studio recordings, performing seven of Ayler and Mary Marie Parks' compositions, plus several African-American spirituals which the saxophonist returned to throughout his career. This free jazz blasphemy of 1969 is today's hip (didn't say 'hipster') sound. Lederer demonstrates what the critics missed in 1969. Within the reggae beat of "Oh Love Of Life!" and the R&B of "New Generation" was the same radicalism that was found in Bells (ESP, 1965). Just as Sun Ra could "Unmask The Batman" and Rahsaan Roland Kirk could cover Smokey Robinson's "My Girl" without any diminishment, Ayler, now Lederer's, foray into rock is a radical act of (let's say it) love.

Just as New Grass opened with a "Message From Albert," Mary LaRose and and Miles Griffith recite a Shaker text from the mid-19th century. From there, the cover "Everybody's Movin'" swings with a Schoolhouse Rock observation of the hyper-frenetic pace of the modern world. The music stays true to the original Ayler/Parks' vision. As it was then (1969), it follows that "Music Is The Healing Force Of The Universe." LaRose shines a guiding light throughout here with her vocals. The title track is a simple melody that burns red hot with a catchy melody, Lederer's upper register gymnastics, and singable lyrics. You can understand why the free jazzers scoffed at this, but the music carries such an uplifting and simple message. Love.