BY MARK SULLIVAN
February 12, 2018
Sign in to view read count 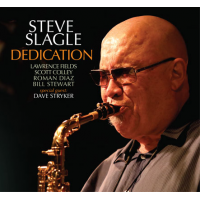 Veteran reed player Steve Slagle delivers another exciting jazz album in this sequel to Alto Manhattan (Panorama Records, 2016). The core band is much the same: pianist Lawrence Fields, drummer Bill Stewart, and Roman Diaz playing conga and percussion on several tracks. Frequent playing partner Scott Colley joins in on bass, and the special guest is long time friend guitarist Dave Stryker. Stryker and Slagle have co-led a band for many years, and the guitarist brings sympathetic support and fiery solos to every project he's involved in. Slagle sticks to the alto saxophone most of the time, picking up flute and soprano saxophone on one track each.

Most of the material was composed by Slagle (along with a Stryker contribution and one from Wayne Shorter). There are no standards on the program, giving it a more unified feel than its predecessor. Each of the nine songs has a specific dedication to a person or thing directly related to the music. "Sun Song" kicks things off with a spirited calypso in honor of saxophonist Sonny Rollins; Diaz's percussion is especially effective. "Niner" is dedicated to bassist Steve Swallow (who gave Slagle that nickname when he was in Carla Bley's band). It's a kind of boogaloo beat, which doesn't especially suggest Swallow to me, but it grooves like crazy. "Major In Come" is the kind of tune that could weed out lesser players at a jam session with its fast tempo and five keys. But it swings above all, and it is dedicated to "Swing and all its meaning."

"Triste Beleza (Beautiful Sadness)" is a beautiful bossa nova (a style which Slagle found daunting as a composer, since there are already so many great ones). Stryker plays nylon string guitar—an instrument I can't recall hearing him use before—but he overdubbed his lyrical, blue-tinged solo on electric guitar. Colley follows him with an equally lyrical bass solo. "Opener" is another up-tempo hard bop tune (dedicated to alto saxophonist Jackie McLean). Slagle plays most of it on alto, but switches to flute for the ending (the instrument he wrote it on). Other highlights include Stryker's ballad "Corazon," with lovely playing from both guitar and alto (Fields sits this one out). "Sofi" (written for his daughter) is Slagle's playful soprano saxophone feature. And the Wayne Shorter selection is not one of the usual suspects. "Charcoal Blues" comes from the Night Dreamer album (Blue Note, 1964), a creative take on the blues from the prime hard bop era.

An album this good is just business as usual for Steve Slagle. A career which includes tenure in Carla Bley's band, the Mingus Big Band and Charlie Haden's Liberation Music Orchestra can hardly be called unrecognized, but he surely deserves greater visibility. This is a good place to reacquaint yourself with his artistry.