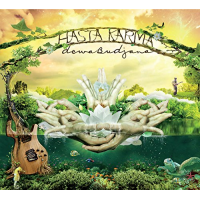 Hasta Karma is the eighth solo album from Dewa Budjana. Though famous as a rock guitarist in his native Indonesia, one might never know it by the way he plays jazz, a path he has been seeking, and owning, for nearly two decades. The expansive foundation of "Saniscara," which introduces this supple set, underscores the talents of a topflight studio band. It's by no coincidence that Dewa should have hooked up with bassist Ben Williams and drummer Antonio Sanchez, both of whom have played regularly with Pat Metheny—a clear and present influence. As John Kelman observes in the album's informative liner notes, "it's hard not to feel the spirit of Metheny looming over the date, especially in Dewa's similar ability to write accessible music that's far more complex under the hood." Vibraphonist Joe Locke rounds out the core band in service of said complexity, with pianist Indra Lesmana adding his own depth of field to half of the album's six tunes. Williams balances the delicate propulsions of Sanchez at the rear with a forward push, and with such a backing at his call, Dewa is free to outdo himself. His individuality is more obvious than ever. He soars in the concluding solo, bringing everything to a soft landing that allows us time to catch our breath in the second tune, "Desember." Dragon's breath, that is, for here Dewa sets his phasers to incendiary, much in contrast to the cold title. Locke's solo is a beautiful insertion, which prompts Dewa to flex his blending skills. It is largely the latter's spotlight, however, and one that fully represents his sucker-punch technique.

Such lucidities give the music a certain tactility that separates Dewa from certain idols, and by which the melodic body of his writing moves and grooves. "Jayaprana" is another that finds Dewa in total control. Its second half gives Sanchez some room to roam, painting a streak of blue for each of Dewa's red, and between them a tender commercial break from Locke, whose feel for melody must be heard to be grasped.

"Ruang Dialisis" bears dedication to Dewa's his late father, alive but ailing at the time of this piece's composition. In addition to its narrative cohesion, samples of Dewa's grandmother singing a traditional funeral chant cross-hatch the grandson's resonant horizontals with a mature cultural fusion. Some Robin Guthrie-esque groundswells emphasize the emotional fragments hovering in ghostly overlay, culminating in gut-wrenching axe work. For playful contrast, "Just Kidung" ("kidung" means "song" in Indonesian) boasts the interlocking gymnastics of Williams and Lesmana, while "Payogan Rain" concludes in self-indulgent beauty. With a folksong quality that rides the edge of western harmony, the tune's acoustic guitar and melodica sing of the open road and a life lived to its fullest.

If jazz is about telling stories, then Dewa is an epic novelist, and his modest yet robust cast of characters eagerly awaits your attention to bring them to life.