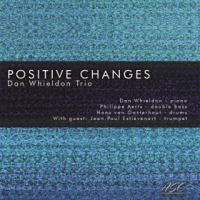 Pianist Dan Whieldon hails from Manchester and has been active in the North West of England's jazz scene for the last decade. Positive Changes is his debut release as leader, made not with fellow Mancunians but with players from Belgium—where he studied and where the album was made—and Holland. Bill Evans is an acknowledged inspiration and Whieldon displays a confident and strongly melodic writing style—a mix that creates a readily accessible first outing.

Whieldon's lyrical piano opens "E. P." and establishes a calming, melodic, mood that sets the tone for much that comes after. So the entry of Philippe Aerts' emphatic double bass comes as a bit of a shock (in a good way). Drummer Hans Van Oosterhout follows a heartbeat later and the bass/drum pairing adds its drive and power to the leader's more delicate phrasing. Guest trumpeter Jean-Paul Estiévenart adds tonal variety with a bright, extrovert style on tunes such as "7." "Waltz For Ronnie" might take inspiration for its title from Evans' "Waltz For Debby"—it certainly shares much of that tune's warmth and romance.

Most of these compositions are Whieldon's originals but there's a cluster of well-known covers ("On Green Dolphin Street," "Nardis," "Speak Low") all of which get fresh interpretations from the band—"On Green Dolphin Street" benefits from a rather louche rhythm, "Speak Low" is taken at a fast tempo and gets its muscle from Whieldon and Aerts' bass line. More unexpectedly, there's Whieldon's meditative arrangement of Hubert Parry's "Repton" (better-known, probably, as the music for the hymn "Dear Lord And Father Of Mankind").