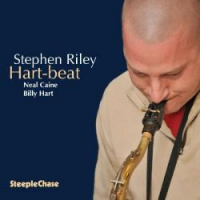 The tenor saxophone trio is one of the great, if somewhat underutilized lineups in jazz. Stephen Riley has made a study of the format and delivers a fine addition to a limited canon with Hart-beat.

Eschewing piano and leaving the horn to carry the musical weight all by itself is an idea that was recorded by the great Sonny Rollins as early as Way Out West (Contemporary, 1957). That record set a very high standard that is rarely met, let alone exceeded. It is the Godfather of the format. One later effort that does come close is Joe Henderson's State of the Tenor (Blue Note 1985), a live recording from New York's Village Vanguard that delivered one of the definitive tenor performances of its decade. Where the Rollins date is snappy and melodic, Henderson's performance is looser, wandering a little more with his improvisations, leaving plenty of room for the bassist Ron Carter and drummer Al Foster.

Hart-beat follows in the footsteps of the Henderson record, with loose, breathy interpretations of standards by pianist Thelonious Monk, saxophonist John Coltrane and, yes, Joe Henderson. Riley's sound is a little understated, relying on good construction and control, without ever screaming his horn. On this date it would be fair to call him a quiet, if energetic player. "Isotope" gets a quick statement of the melody before Neal Cane joins the fray with clean forward bass line. Riley takes his improvisations up a notch with each chorus, building a wonderfully sophisticated solo before laying out for the bass to take a turn.

A less frequently played Monk classic, "Ba-Lue Bolivar Ba-Lues-Are," gets a similarly wandering treatment with equally good results. In deciphering Monk, Riley makes the critically important choice to internalize the melody into his improvisation instead of just playing over it. This kind of depth is the difference between an okay Monk interpretation and a really good one; this is a really good one.

Special mention should be made of drummer Billy Hart, the most seasoned musician on the date. A veteran of Miles Davis' On the Corner (Columbia, 1972), Hart provides subtle, graceful rhythm with Riley's understated playing. Like everything else on this date, the drumming is very sophisticated. The other Henderson tune, "Black Narcissus" has Hart splashing his cymbals out behind the bass and horn, initially providing less beat and more aural soundscape before he picks up the rhythm on the ride with a rim tap. It's very sweet, delicate drumming.

So does Hart-beat live up to the standards set by Henderson and Rollins? That's a tough call, given the iconic status of those efforts. In all fairness, those are almost impossibly high standards to meet. Hart- beat is, however, a really solid recording, with some noteworthy playing making it a worthy successor in a lineage of great tenor saxophone trio records.

Just You Just Me; Isotope; Lonnie's Lament; When It's Sleepy Time Down South; Ba-Lou Bolivar Ba-Lous-Are; The End Of A Love Affair; Mr. Sandman; Black Narcissus; All God's Chillun Got Rhythm.